Oleg Sentsov: “Anyway, they won’t send me to do time at the North Pole, right?”

Posted on October 3, 2017 by Maria Stanislav

A political prisoner’s letter to the free world
By Oleg Sentsov, with commentary by Zoya Svetova, Russian journalist/human rights activist/producer, for Open Russia
09.30.2017
Translated and edited by Voices of Ukraine 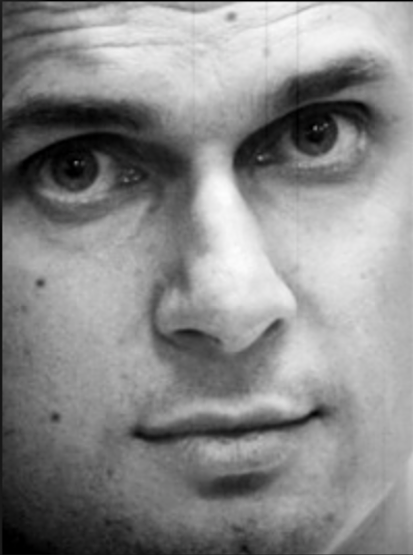 The Ukrainian film director [Oleg Sentsov] sent a letter from the Tyumen [detention] facility. He believes that he is being transferred to [Russia’s] northernmost maximum security colony in the Kharp village, which is known for its strict regime.

Oleg Sentsov, who was serving 20 years in a maximum security colony in Yakutsk (Open Russia: convicted by the North Caucasus district military court in August 2015 and found guilty of allegedly creating a terrorist organization in Crimea), has been transferred in an unknown direction in early September [2017].

On September 9, members of the Irkutsk Public Monitoring Commission located Sentsov in the Irkutsk detention facility.

Since then, neither his family nor his lawyers know anything about his location, or where he is being taken.

On September 29, I received a letter from Sentsov through the mail. The last page was dated September 17, 2017, Tyumen. The stamp on the envelope said: Tyumen oblast, FKU SIZO-1 [federal government agency “Detention facility-1”], Tyumen, stamp of the correspondence inspector. Posted on September 21,2017.

It took a week to reach Moscow.

Oleg Sentsov does not write often. From his letter, I found that while in the Yakutsk colony, he would spend months being denied access to letters sent to him by his friends, family, and strangers from all over the world. Therefore, we don’t know whether the colony’s operative department sent all of Sentov’s letters addressed to other people.

Several months ago, the Federal Penitentiary Service of Russia (FSIN) denied me an interview with Sentsov. When I contested this decision in the Zamoskvorets court (Mosc0w), the FSIN representative suggested that I write Sentsov a letter with the questions I wanted to ask him in person. I explained that letters do not reach Sentsov. The FSIN representative was very surprised and did not believe me.

It turned out I was right.

Every letter sent by a prisoner to the free world is like a message in a bottle tossed into the sea: who knows if it reaches anyone. I believe that Oleg sent this letter to let everyone who worries about him know where he is and what’s going on with him.

“I’m doing okay. In transit. They whisked me away from Yakutia, and are taking me to the Yamalo-Nenets Autonomous Okrug [district]. There’s only one penitentiary facility there, the legendary Kharpy. I think you know better than I do what it used to be like there, and what it’s like now. I don’t expect anything nice from this trip. Especially now that I’ve been through the Irkutsk and Omsk central prisons, and I have first-hand experience of how bad it can be.

“Physically, no-one is bothering me, of course, but you understand how this system can punish and torture people in the most perverse ways, without resorting to brute force

“I haven’t written in a while because I really wasn’t in the mood. Not because I’m depressed or feeling dispirited — that’s not my thing, don’t worry!

“I’m just not a very talkative person, and there are periods where I minimize external communication.

“The Yakutsk operative department contributed to that, by the way: this year they issued two postcards to me, one for New Year’s, and one for my birthday. But before I left, they didn’t just return the box to me with old letters that they’d kept for the last year and half, but also gave me about a hundred new ones. They’d collected them for a year, and only now decided to give up their paper hostages. So now I’m reading while in transit. They also gave me a dozen of the books I’d been sent and not given earlier.

“I’m cursing as I drag this, very valuable to me, literature from prison to prison, but it would be a shame to abandon it. Ask them not to send me any more books, okay? Because they’re not sending me the books I need, but I still can’t throw them away. So I’m giving them away when I can, and dragging them with me, but that’s as much of this portable library as I can transport!

“Also, don’t send me any parcels that I don’t request, because I’m only allowed a parcel once every three months. I would rather write to Natasha (Open Russia: Oleg Sentsov’s sister) or to someone else, through you, ask for what I need and receive those exact things. There have been situations where some kind soul would take pity on the poor political prisoner, and send a parcel with some useless nonsense. Meanwhile, I run out of the supplies I’d been sent, and have to wait another three months to get the things I need.

“I’ll write when I get to the place.

“One last thing on the needful topic (which, by the way, takes up a large portion of a detainee’s life) — please ask my sister Natasha to put about 10 thousand roubles [USD 170] on my prison account. By the time I get there, they’ll reach me.

“Klimkin (Open Russia: Ukraine’s Foreign Minister) tried to phone me on my birthday in July, and Pussy Riot, with Alekhina, came to Yakutsk to support me. That was really cool! But instead of the phone call, I received another stretch in solitary [SIZO] (my fourth or fifth one), and then got transferred to a stricter place, Kharp. Russian FSIN signed an order to that effect in late July. That does not mean that I’m asking you not to do anything.

“All you, out there, can do anything you consider necessary to support me or other political prisoners. Just know that local law enforcers follow their own brand of logic, and this is how they react sometimes.

“After all, they’re not going to send me to do my time at the North Pole, right?

“Overall, everything is okay with me, and I hope that I’ll survive this trip and my time at the destination with what remains of my health. I hope you out there aren’t going to throw a panic about this, because I’m not sitting here alone; there’s many of us, and my conditions are far from the worst.

“Aside from that, I’m doing the same things as before: reading, now in English as well; editing and adding to the scripts I’ve written — this is a job I can do almost forever, but I believe I’ve got a few more collections in me; exercising as far as I can, and so on.

“Needless to say, I have been following events in Ukraine and Russia, as far as was possible. Well, I can’t say anything good — maybe the view is bad from here.

Ukraine is going through some hard times, but still scraping in the right direction somehow. Russia has permanently stuck in a dead end, and no-one knows what to do next.

“I still don’t doubt our success and our victory, nor that everything will be well — very well, even!

“P.S. Don’t write here [to this colony], I will be on the move before this letter even reaches you.”

Summary of Sentsov’s case:
–  convicted by the North Caucasus Military District Court to 20 years in prison on charges of “creating a terrorist organization and committing two acts of terrorism;”
– was supposed to serve his sentence in Ukraine as part of a prisoner exchange deal;
– was subsequently denied that option on false grounds;

1 Response to Oleg Sentsov: “Anyway, they won’t send me to do time at the North Pole, right?”