Sentsov and Kolchenko: Russia does not extradite its own

By Anton Naumlyuk, journalist (text and all photos)
10.21.2016
Translated and edited by Voices of Ukraine

The Russian Ministry of Justice explained its position regarding transferring Ukrainian film director Oleg Sentsov to Ukraine to serve his sentence at home. In short – the transfer will not take place. According to the agency’s official response to “the Ukrainian side’s” request, Sentsov has only one nationality – Russian, and because Ukraine does not provide for dual citizenship, the Russian Federation will not consider transferring its citizen to serve his sentence in another country.

Oleg Sentsov was convicted by the North Caucasus Military District Court to 20 years in prison on charges of creating a terrorist organization and committing two acts of terrorism. The latter are two not very successful arson attempts: at the office of the Party of Regions in Simferopol (in the case file, the office appears as belonging to the United Russia party, which, in actuality, could not have existed on the peninsula at that time- A.N.) and the office of the “Russian community of Crimea,” which was the headquarters of the “Self-Defense of Crimea” militant group. The terrorist organization in question, according to the court, was a cell of “Right Sector,” which Sentsov had allegedly created in Crimea, a nationalist Ukrainian group that is banned in Russia.

Oleksandr Kolchenko, an anti-fascist activist, was sentenced together with Sentsov, to 10 years of imprisonment; his only connection to Ukrainian nationalists is the fact that he was beaten by them several times, during memorials for journalist Anastasia Baburova and lawyer Stanislav Markelov who were killed by Russian nationalists in 2009. The human rights movement “Memorial” has recognized Kolchenko and Sentsov as political prisoners.

“What is your nationality?”

The option to serve sentence at home was viewed as one of the main possibilities for the return of Ukrainian political prisoners in Russia. One of the obvious conditions for the transfer of prisoners would be a Ukrainian citizenship, but while no doubts arose regarding the passports of Nadiya Savchenko, Mykola Karpyuk and other Ukrainians, everything is much more difficult in the case of the “Crimean terrorists.” The issue of Kolchenko’s and Sentsov’s citizenship arose even during the trial. 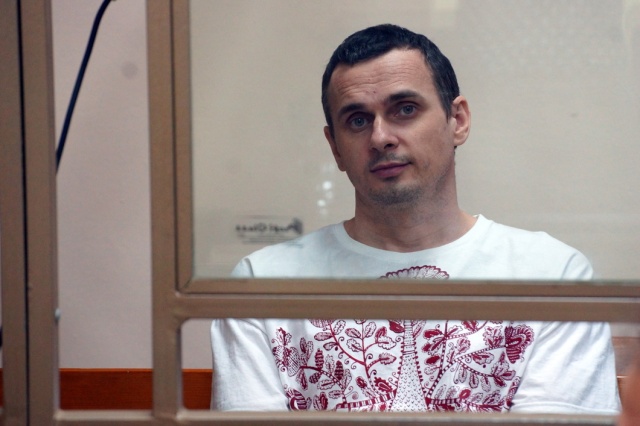 “What is your nationality?” – Judge Sergei Mikhailyuk asked Kolchenko at the start of the first day of the court proceedings. “Russian, Ukrainian,” the anarchist responded hesitantly. “Decide already,” the judge said with a smile, and then asked if Kolchenko can speak Russian (he does). Sentsov answered [the question about his nationality] confidently: “Ukrainian.” In the case files, both of the accused appeared as Russian citizens, and the Ukrainian Consul was not allowed to see them. At the same time, only Ukrainian passports [of both Sentsov and Kolchenko] were present in the case files.

After the verdict, Sentsov was sent to serve his sentence in Yakutia, and Kolchenko, in the Chelyabinsk region. In March 2016, it seemed that the citizenship question was resolved in the Ukrainians’ favor. The final report, published by the High Commissioner for Human Rights in Russia, bluntly states: “As a result of the High Commissioner’s actions prompted by Sentsov and Kolchenko’s complaints, any legal uncertainty with regard to their nationality was eliminated, and their Ukrainian citizenship recognized.” By that time, Kyiv had already addressed the Russian Ministry of Justice with a petition for transfer for Sentsov and Kolchenko to serve their sentences at home. At the time, it seemed that either that way, or through a pardon, the Ukrainian political prisoners would be in Ukraine before the end of the year. But apparently, the Ministry of Justice knows nothing about the reasoning of the Russian High Commissioner.

“A person cannot be made a citizen of another country against their will. Kolchenko holds a Ukrainian passport. And Sentsov did not waive his Ukrainian citizenship.”

“The position of the Ministry of Justice is based on a federal constitutional law; the letter mentions the accession of Crimea and says that Sentsov has Russian citizenship because he did not waive it in writing. That is, according to the Ministry of Justice, all those who did not write such a waiver automatically received Russian citizenship. Except that a certain procedure had to be followed: writing the appropriate application, and obtaining a Russian passport. Sentsov did not write any such application, did not get a passport, and did not refuse his Ukrainian citizenship. De facto, he was made a Russian citizen, but de jure he did not become one, he did not undergo any procedures [to that effect],”- responded Sentov’s lawyer Dmitry Dinze.

The lawyer reminded everyone that Kolchenko’s defender, Svetlana Sidorkina, tried to sue the Migration Service regarding her client’s citizenship, but the Simferopol court rejected her claim, stating that there was no formal violation in the fact that Kolchenko was essentially given Russian citizenship by force. “I appealed to the High Commissioner for Human Rights in Russia, the Office of the Prosecutor General, who replied that since [Kolchenko] did not complete the procedure for obtaining Russian citizenship, he remains a citizen of Ukraine. Her position is: a person cannot be made citizen of another country against their will. Kolchenko has a Ukrainian passport, he did not complete the procedures, thus, he is a citizen of Ukraine,” insists Dmitry Dinza.

There is another way

The refusal of the Russian Ministry of Justice to consider the option of transferring the Ukrainians to serve their sentences in their homeland certainly does not exclude their return, but it does close off one of the routes for such return; one that is not the easiest for Kyiv, in fact. Previously, all high-profile exchanges of Ukrainian political prisoners took place via their pardon and exchange, not by means of extradition for serving their sentence. Nadiya Savchenko went home a free woman, as did the GRU personnel Alexander Alexandrov and Yevgeni Yerofeyev, who were exchanged for her. And Yury Soloshenko and Gennady Afanasyev’s pardons were broadcast almost in real time.

“As we have already seen, Russia does not extradite anyone from the list [of political prisoners] under the Convention on the Transfer of Sentenced Persons to serve their sentences in their country of citizenship,” – said Ilya Novikov, the lawyer for Ukrainians Nadiya Savchenko, Mykola Karpyuk, and Valentin Vyhivsky. “This is nothing new. We should concentrate on the exchange and pardon mechanisms. There is a small upside to the fact that the issue of citizenship is being treated so crassly – it will make matters easier with the European Court of Human Rights. And overall, it will be easier to explain why Russia’s stance on this is wrong.”

Almost all lawyers say that in political cases, especially those involving Ukrainians, the defense does not view the Russian court as a body of fair judicial procedure. Dmitry Dinze, who represents Sentsov’s interests, is not about to challenge the position of the Ministry of Justice.

“To be honest, we are afraid to make the situation even worse,” the lawyer expressed his concern. “We will, most likely, appeal to the High Commissioner for Human Rights, so that his office would repeat their view on Sentsov’s Ukrainian citizenship. We would like to see the issue discussed at the initiative of the High Commissioner and the Prosecutor General, who have already expressed their position. And, of course, we expect the President of Ukraine to solve this situation at the highest level, using diplomatic means.”

Problems with the processes of exchange

It is true that after the return of Soloshenko and Afanasyev to Ukraine, the exchange processes seemed to have stopped. The incident with “Ukrainian saboteurs” in Armyansk failed to add any optimism to the matter of returning Ukrainian political prisoners home.

On the other hand, the [Russian] Bataysk Colony #15 currently holds two Ukrainian participants of high-profile trials: Oleksiy Chirniy, the main witness in the case of Sentsov, and Serhiy Lytvynov, whom the Investigative Committee of Russia originally accused of mass killings of civilians in the Luhansk region. Chirniy expressed a tentative hope that his exchange is being prepared. 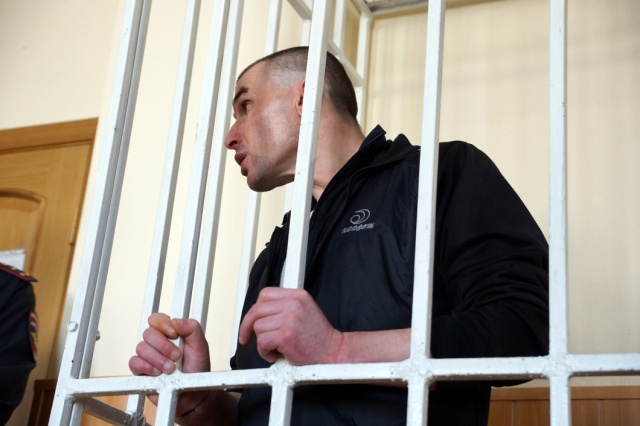 Lytvynov’s lawyer, Victor Parshutkin, does not exclude that possibility in respect of his client, either. “Perhaps they will hand him over to Ukraine to serve further punishment, or…I’m wary of making predictions. The most important thing is, he is not forgotten – another hearing on redress of injury is scheduled for October 25th in Moscow’s Basmanny District Court, and yesterday, we received the decision on the verdict’s appeal. Now there is nothing to stop us making a complaint to the European Court,”- the lawyer noted.

The possibility of the exchange and return of the “Chechen prisoners” Mykola Karpyuk and Stanislav Klykh may be on the table after October 26, when the Supreme Court [of Russia] holds a hearing on the appeal against the verdict made by the Supreme Court of Chechnya, which condemned the Ukrainians for allegedly taking part in the first Chechen war on the side of Ichkeria. Until the appeal hearing, the verdict has not entered into force yet, so it is impossible to insist on an extradition of the convicted. 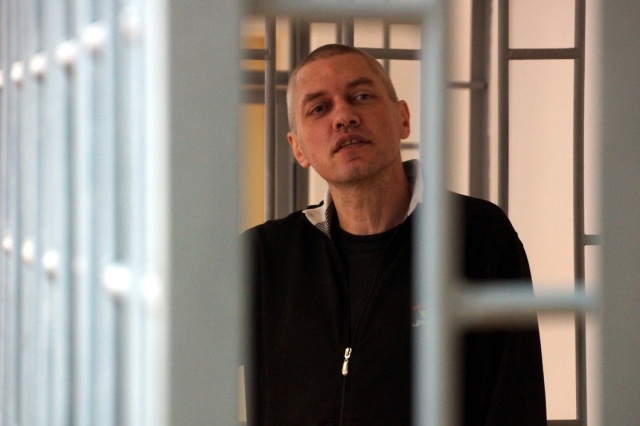 Although, Klykh is also currently on trial in Grozny for insulting the public prosecutor Salambek Yunusov. It is true that the Ukrainian displayed some unbalanced behavior during the court process – shouting, reciting poetry, speaking out of place. At the last hearing, Klykh, in response to the prosecutor’s statement, refused the services of his lawyer, insisting that his interests in court be represented by the singer Stas Mikhailov. The defense suggests that this behavior may be the result of tortures, about which Klykh spoke in the Grozny courtroom, showing burn marks from electricity on his legs. The lawyer Marina Dubrovina requested a psychiatric examination of the defendant, to which the judge stated that he has no reason to believe Klykh is mentally ill.

5 Responses to Sentsov and Kolchenko: Russia does not extradite its own