By Nikolai Sergeev
04.08.2016
Translated and edited by Voices of Ukraine

Moscow and Kyiv are ready to exchange prisoners 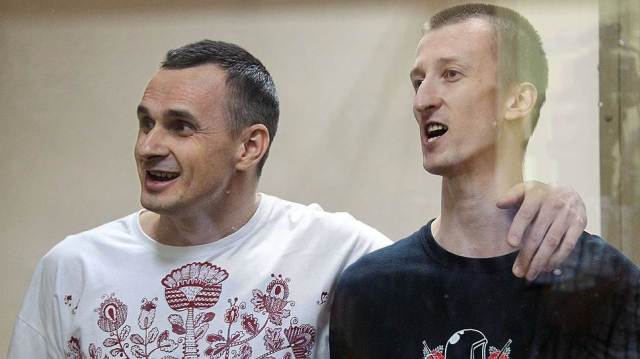 Four citizens of Ukraine, including film director Oleg Sentsov, sentenced in Russia to lengthy prison terms for “terrorism and spying,” will be handed over to the authorities of their country. According to the official version of the Ministry of Justice, the talks are not about an exchange of prisoners – the Ukrainians will be returned to their homeland to serve their sentences.

Today, the press service of the [Russian] Ministry of Justice stated that the FSIN [Federal Penitentiary Service] was instructed to prepare the documents of the convicted Oleg Sentsov, Alexander Kolchenko, Gennady Afanasyev and Yuri Soloshenko for further punishment in Ukraine. In the FSIN, they have to check the presence or absence of grounds that could prevent this transfer. However, the Ministry of Justice stressed that the Supreme Court will make the final decision on this matter. At issue is the fact that the sentences of the convicted have not yet entered into force.

The reason for the transfer was an appeal from Ukraine Justice Minister Pavel Petrenko, who asked to do it out of “humanitarian reasons.”

Oleg Sentsov was sentenced by the North Caucasus District Military Court to a 20-year sentence for “terrorism.” According to investigators, he established a branch of the banned Russian organization “Right Sector” in Crimea, and its members Kolchenko and Afanasyev (who received ten and seven years respectively) committed arson against the public organization “Russian Community of Crimea” and the local branch of the party “United Russia” which took place on April 14 and 18, 2014. In addition, they tried to organize the May 9, 2014 bombings of the monument to Lenin and the “Eternal Flame” memorial in Simferopol.

In turn, the former General Director of the state enterprise “Zorya, Production Amalgamation” [defense factory], Yuri Soloshenko by verdict of the Moscow City Court received a six-year sentence for spying for Ukraine. According to investigators, he was trying to smuggle secret components of the SAM S-300. While under investigation in remand, the 73-year-old Soloshenko admitted his guilt, and that was the reason for the reduction of his sentence.

According to Kommersant sources, having transferred the Ukrainian convicts, the Russian authorities will receive the convicted from the Ukrainian side. Relevant documents are still being prepared, but amongst them may well be the former Russian soldiers Evgeny Erofeev and Alexander Alexandrov, whose trial is nearing an end in Kyiv.

[Editors note: we trust no deal until our political prisoners are physically back on Ukrainian soil. No mention today of a deal for political prisoner Nadiya Savchenko dying slowly in Russian prison entering her 4th day of a dry hunger strike, whose symptoms of dehydration according to her lawyer Ilya Novikov who visited her today are obvious: dry skin, tongue and gums are white, red blood cells in her urine and herself believes she will not last longer than 4 more days. The Ukrainian Consul has not been allowed to visit nor have any Ukrainian or German doctors according to Nadiya’s specifications as she refuses to allow Russian doctors to examine her.]