By Voices of Ukraine Senior Staff with posts from Ukraine War Amps
04.07.2015

In March, the Ukraine War Amps Community through the Adopt a Soldier project helped four Heroes, delivering $500 in total. The project started with one veteran in February, and will increase to nine in April! Following is the March report: 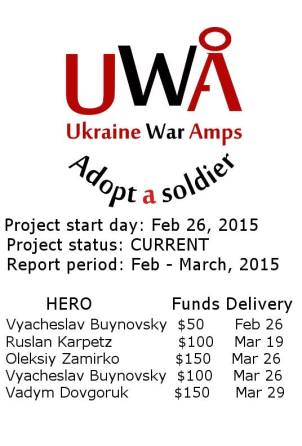 In addition, the updates on the individual war amps are as follows:

On March 27, 2015, Vyacheslav Buynovsky left the hospital and finally got home to Sumy Region. He also agreed to coordinate UWA logistics and some of the activities in Ukraine: to call some hospitals and ask for seriously wounded amputees who could be helped by Adopt A Soldier. He feels good and is in a good mood, looking forward to contributing to the cause. Buynovsky was “Adopted” by a family in Toronto, Canada.

Vasyl Pelysh‘s family is now in constant contact with Isabel – Vasyl’s supporter through the UWA – their first established bridge. Vasyl should be in Chicago soon for further treatment. Vasyl comes from the Lviv region.

Maxim Vakulenko was “Adopted” by a school in Mississauga, Ontario, Canada! He is busy volunteering for the Aidar Battalion. His wife just turned 22, and they have a 3 year old son. Vakulenko  comes from near Kyiv, Ukraine.

Oleksiy Zamirko was also “Adopted” and found common ground with the UWA rep in Kyiv (Dmytro Gribinik – look for him in the Facebook group) and they committed to becoming airborne as soon as Zamirko gets better, as Zamirko is eager to parachute together with Dmytro! Dmytro originates from Alchevsk and Zamirko from the Vinnytsia region of Ukraine. 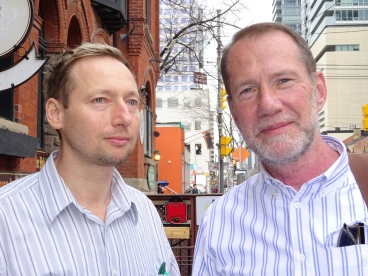 The Adopt a Soldier project was founded by John Broadhead and Gene Berezovski, who have also co-founded Ukraine War Amps. It aims to “adopt” soldiers by providing monthly stipends of approximately $50 USD to as many veterans of the Russian invasion and war on Ukraine as they can, on an ongoing basis. 100 percent of the proceeds go directly to those being helped. Ukraine War Amps provides photographic evidence of payments. In addition, they put you directly in touch with the war amp you’re helping! Proofs of payment and the stories of the war amps can be found on the Ukraine War Amps Facebook page.  Your assistance can make the difference between their living with some dignity or living in hopelessness. Adopt A Soldier’s goal is to ensure that amputees have everything they need to live as normal a life as possible, while also providing a unique bridge between the donor (wherever they are in the world) and the amputees in Ukraine, by putting them directly in touch with each other.

Donors can choose an amputee from the list on the website and choose to donate to their “adopted” amputee on a monthly basis. Just leave a message in the comments for your chosen amputee, or for the Ukraine War Amps (UWA) team, and UWA will deliver it or help to provide a direct connection between both sides. Here is what all the donation options look like:

UWA will send out reminders to make a donation on a monthly basis through the website. UWA collects funds during the first 2 weeks of the month, then delivers them during the second half of the month. In addition, anyone can send them an email with suggestions, recommendations, or ideas through their website.

Please visit the Facebook page and the website for more information and photographs on each of these Ukrainian heroes!

Please help Ukraine War Amps help these Veterans and heroes who stood up for their homeland, for its freedom and democracy.

More about the founders of the Adopt A Soldier project and the Ukraine War Amps (and Voices of Ukraine’s first story on this initiative) can be found here:
https://maidantranslations.com/2015/03/14/you-asked-how-to-help-adopt-a-soldier/