You asked how to help: Adopt A Soldier

ADOPT A SOLDIER – a new project of the Ukraine War Amps

On Feb 26th, 2015 at Kyiv’s Central Military hospital, the Ukraine War Amps’ Adopt A Soldier project was founded, with former soldier Vyacheslav Buynovsky as its first recipient. Buynovsky has had one leg and one arm amputated.

Adopt a Soldier aims to provide monthly stipends of approximately $50 USD to as many veterans of the Russian invasion and war on Ukraine as they can on an ongoing basis. Your assistance can make the difference between their living with some dignity or living in hopelessness. 100 percent of the proceeds goes directly to those being helped. Ukraine War Amps provides photographic evidence of payments. In addition, they put you directly in touch with the war amp you’re helping! Proofs of payment and stories of war amps can all be found on the Ukraine War Amps Facebook page. (More details on how to participate below). 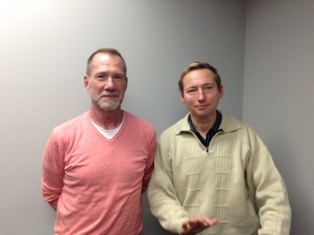 John Broadhead and Gene Berezovski co-founded Ukraine War Amps. John is a third generation Canadian born in Toronto of Irish descent whose father was a war amputee from World War II. His father was given the help necessary to raise four children and enjoy a 20-year retirement. John would also like to help men who were injured protecting their country. Gene is a Ukrainian from Kyiv. John and Gene have worked together for 9 years now at GestureTek, an interactive software and computer vision software provider, both of them on the technical side dealing with Pre & Post Sales support, installation, and training all over the world. They started Ukraine War Amps in July 2014, after Gene had already spent a couple of months helping the Donbas battalion. Gene realized he could only give so much individually, but if he organized and made it easy and direct, he could greatly increase the effectiveness of help given. Ukraine War Amps is an ongoing effort to assist the veterans of Ukraine.

Here is Gene talking about Adopt A Soldier:

The ultimate goal of Adopt A Soldier is to ensure that amputees have everything they need to live as normal a life as possible. In return, they provide those who want to help with a unique bridge between the donor/sponsor, wherever they are in the world, and the amputees in Ukraine by putting them directly in touch with each other. Ukraine War Amps is in constant touch with the amputees by phone, email, Facebook, Skype, the Ukraine War Amps group, as well as through their representatives in Ukraine who go to the hospitals and doorsteps of the war amps.

Four amputees – including Vyacheslav Buynovsky – will be helped this month, in March. The others include Vasyl Pelysh, whose story Voices of Ukraine translated last year, Maksym Vakuleno, and Oleksiy Zamirko. Please go to the UWA website and Facebook page for their full stories and updates. Ukraine War Amps hopes to add more guys in April. Right now Ukraine War Amps promises to provide them with a $50 USD [approx. $1,083 Hryvnia] monthly stipend and they hope to be able to increase that amount soon.

Within the Adopt a Soldier project Gene and John want to establish a relationship between the amputees and their global friends and make sure this relationship lasts and thrives. They state that it is very important aid for the amputees when they return home, providing them with a message of global care, hope and human support beyond financial aid. The fundraising is all done through a crowd funding website (http://www.youcaring.com/medical-fundraiser/adopt-a-solider-a-project-of-ukraine-war-amps/313363), where donors can also find pictures, YouTube videos, and personal stories of the veterans being sponsored. From today there are 48 days left on this project, so don’t wait to donate!

How it works is that donors can choose an amputee from the list on the website and choose to donate to their “adopted” amputee on a monthly basis. All you have to do is leave a message in the comments for your chosen amputee or for the Ukraine War Amps (UWA) team… and UWA will help to provide a direct connection between both sides. Here is what all the options look like:

In other words if you are unable to make an ongoing donation of $50 monthly, then together all monies will be grouped toward individual war amps to make up a regular monthly donation amount which they will receive. All the options include UWA’s invitation to leave a message for the soldiers, or for an adopted soldier, which UWA will directly deliver. Everyone can send them an email with suggestions, recommendations, or ideas through their website.

UWA hopes that in establishing some direct connections between the helper and the helped, funders will understand more about the developments and circumstances surrounding the amputee whom they are helping. They may feel personally involved and confident their money reaches the amps and follow the progress or discover other (non-monetary) needs that may be addressed. For example, even small talk on Skype may present much needed emotional support for the wounded or help him improve his English. Also it is a unique opportunity to learn the real ground situation first hand. Some amps have little kids and donors may realize that clothes/toys/computer games could also be a big help as families with 2 kids and an amputee father have to cope without many necessities. In the end, timely help may preserve the family. Sharing information on gaining new skills through free online learning, perhaps on how to get into website building or the computer industry for example, so that an amp is able to work from home, or to help the amp get a job he can do is also seen as a very valuable part of the exchange.

Ukraine War Amps will send out a reminder to make a donation on a monthly basis through the website. UWA collects funds during the first 2 weeks of the month and delivers them during the second half of the month.

Please help Ukraine War Amps help these Veterans; help them help the heroes who stood up for their homeland, freedom, democracy and human rights.

Voices of Ukraine, Soldier whose arm was axed off while in captivity needs prosthesis

5 Responses to You asked how to help: Adopt A Soldier