By Voices of Ukraine senior staff with Gene Berezovski
07.04.2015

Founded in July 2014, Toronto-based Ukraine War Amps is a worldwide community whose sole purpose is to assist amputees, severely injured soldiers and patriots who have been fighting for the liberty of Ukraine during Russia’s ongoing invasion and war against it. The Ukraine War Amps community is comprised of caring people who sponsor and support Ukraine’s heroes, and now also, their families.

UWA has an international team of volunteers working 24/7 all over the world to make aid available and deliver it directly to the recipient’s doorstep or bedside in any city, town or village within Ukraine in a timely manner.

In February 2015, UWA introduced its now popular Adopt a Soldier project. With the help of many, UWA provides monthly stipends of approximately $50 USD to as many Ukrainian heroes as it can. One hundred percent of the proceeds go towards Ukrainian veterans. Adopt a Soldier establishes a unique bridge between the donor and the amputee. The donor helps on a monthly basis so both parties are always connected. 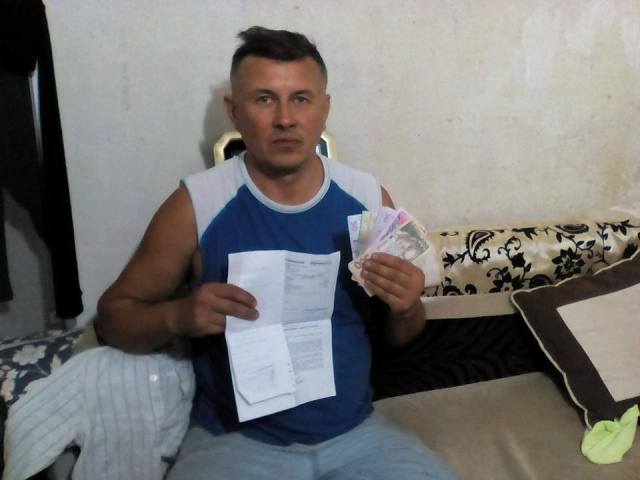 Cyborg Serhiy Koval from Dnipropetrovsk volunteered to join the Ukrainian Defense Force and is one of the Cyborgs who heroically defended the well known Donetsk Airport. He was severely wounded in a battle on October 3, 2014: receiving a concussion, non-stop headaches causing sleepless nights to this day, broken ribs, injured lung (a partial lung amputation followed and breathing is very challenging for Serhiy now), and severe spinal problems. Source

Some UWA supporters have had the opportunity to meet with the heroes and their families in person, others communicate through phone, Facebook, emails, or Skype. This helps supporters to learn more about their adoptee and his or her family and gives them a better understanding of the adoptee’s needs, situation and what can be done to bring them to the level of living they deserve. It also gives hope to the Ukrainian hero and the knowledge and experience that they are not forgotten.

Andrew Sharayenko, 40 years old, from Bila Tserkva. Voluntarily mobilized in February of this year. He served in the 17th Territorial Defense Battalion “Kirovograd” in Horlivka. On April 17, during a battle he received a serious wound in his right hand and in Dzerzhinsk it was amputated. He was then transferred to Kharkiv and then to the Kyiv military hospital, where he is now. He still has to undergo rehabilitation and obtain expensive prosthetics. Source

Our Adopt a Soldier beneficiary list includes: one leg amputees Maksym Vakulenko (25 year old father of a 3 year old boy), Oleksiy Kurhan (father of 2 children), Stas Stovban (19 year old); one arm amputees Vasyl Pelysh (a 20 year old, whose arm the occupants axed off because of a Trident tattoo), Serhiy Hordiychuk (father of 2 children who worked in construction), Andriy Ivanov (a newly-wed, now on honeymoon thanks to rehab money), Andriy Sharayenko (worked as an electrician); one leg and one arm amputee Slava Buynovskyy (who miraculously survived); two leg amputee, the legendary, Oleksandr Chalapchiy (who just had a new baby girl); two arm amputee Serhiy Tovstyk (father of two girls, worked as an IT Engineer); two legs and one arm amputee Vadym Dovgoruk; four limb amputee Vadym Svyrydenko (who is expecting a new baby girl in August).

UWA held a baby shower for the Svyrydenkos at the hospital recently. To date, over 20 heroes and their families are supported by the Ukraine War Amps community on a monthly basis. Some have been supported since February and March of 2015, while others joined in April, May, and June. However, much more needs to be done! If you are looking for ways to directly help a soldier – please Adopt a Soldier and join the efforts of the Ukraine War Amps community. 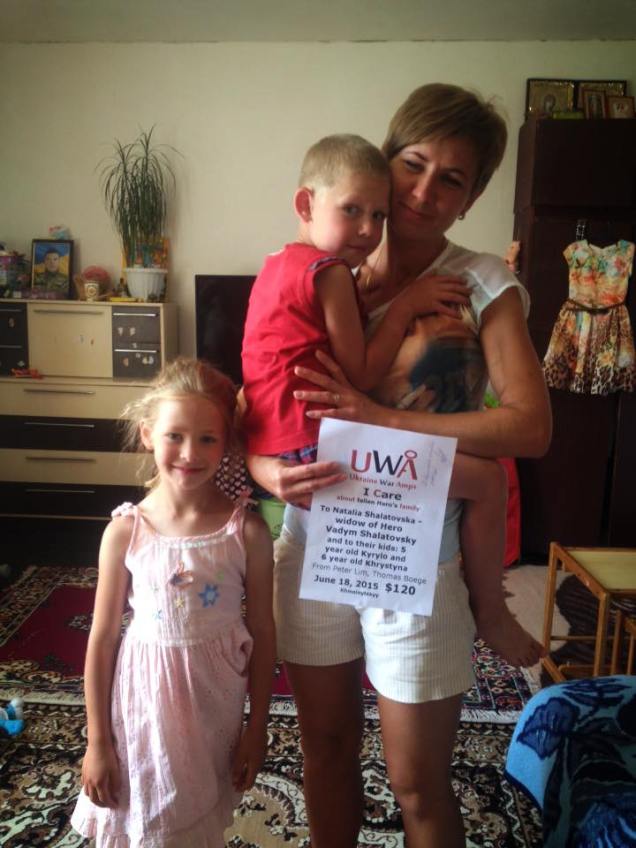 Khmelnytskyi, Ukraine: Natalia and her 2 kids lost their husband and dad in a crucial battle last year. In September of 2014, Vadim had been only 9 days in the army when his car was shot through and he was killed. For many months Natalia was waiting for news from him, not knowing what happened to him. At the beginning of this year, his body was identified and in March 2015 he finally made it home and was buried. Since then Natalia and the kids have been living on the pension of her mother, so far there is no support from the government in any form. UWA delivered $120 and shared some tea and cake and the family showed photos of better times with Vadim. The family is thankful for the money and say it helps them a lot!

UWA founders Gene Berezovski and John Broadhead say that they have discovered, through personal experience, that not only the war amps and their families need help – but the fallen heroes’ families suffer as well. We need to remember those who joined the Nebesna Sotnia (Maidan’s Fallen Heroes) fighting for their country. The program I CARE about Fallen Hero’s Family is our action plan and a wakeup call, launched in June of 2015. We need your help to provide assistance to the fallen heroes’ families on a monthly basis! Our first two sponsored families were reached and visited by UWA reps and we delivered financial assistance that came from Peter Lim and Thomas B. The families are: the widow and child of Petro Kizim (he was 24 years old) who are left without any means of income, while the family of Vadym Shalatovskyy (his widow Natasha has two children) lives only on a pension that Natasha’s mom provides.

Petro Kizym’s widowed wife Iryna Kruhla and 2 year old son Andriyko in their home in Cherkasy region. Petro Kizim was 24 years old on March 5, 2015 sitting in a truck with his friend and neighbour Oleksandr Behersky when a deadly strike killed Petro on the spot. Iryna and Andriyko became one of two families supported by the I CARE program in June 2015.

With the Adopt a Soldier and I CARE programs on the go, the Ukraine War Amps community is getting closer to its first anniversary on July 17, 2015 – one year since John Broadhead, a Canadian of Irish descent (whose dad was a WWII amputee and veteran) and Gene Berezovski, originally from Ukraine, brought the Ukraine War Amps idea alive.

To mark the UWA one-year anniversary, UWA is pleased to announce their first Ukraine War Amps Community Meeting and Potluck Event for those members who live in the Greater Toronto Area. The event is to be held in Centennial Park, Toronto on Saturday, July 18, 2015 between 11am and 1pm. It is a great opportunity for our GTA members to meet each other as well as greet new members and share our stories. Gene will be doing a brief presentation on the heroes of the Adopt a Soldier program and the recently-started I CARE project.

Ukraine War Amps’ Adopt a Soldier, and now, I CARE, projects are proud to be sponsored by the following organizations:

And to be supported by the following bodies:

To help support the Adopt a Soldier and I CARE programs
please access both through this link: