03.13.2014 Postcardsfrommaidan.org
Translated by Voices of Ukraine
Edited by Alex Howard for VOU

Postcards from Maidan is an art initiative that helps facilitate the psychological rehabilitation and physical recovery of patients. Artists visit the wounded and use drawings as a storytelling mechanism of Maidan. The wounded are later presented with the drawings. This is the story of one Maidan protester. It is story #14.

“I spent three months on Maidan. I did come back home at times, to get washed up and change my clothes. Last time, I was beaten on Shovkovychna Street, on February 18, 2014. I came to back to Lviv for a funeral on February 23, and that’s where I felt my head spinning, and so I came back here.

I was beaten around 2 or 3 am, when the Berkut police [Ed. note–now disbanded riot police] started chasing us. I stood up for a young guy, he was dragging his shield, I don’t know if they beat him or it was a grenade. He could barely walk, so I took his shield and fended off four Berkut policemen from him. Well, I pushed two of them on the ground, and two of them went around to get me, and that’s it. I don’t remember what happened after. I came to the Lvivska Brama, but it was impossible to walk through there, since Berkut was nearby. So I walked to the Hotel Ukraine. There were about 12 of us. There was a slope and a chain link fence there, I untangled it and we jumped to Maidan over the trash containers. A woman, she must have lived nearby, she was great, she opened the gates for us and we came to Maidan. If we were left along with those animals back there, who knows [what would have happened]… We talked to them, they had those crazed eyes of a bull. A woman talked to one, and he almost hit her.

I was with Galya and my brother. He worked at a dispensary on Hrushevskiy Street. Berkut policemen threw a grenade inside, came in, and stomped on the medications. I called my brother and asked where he was. He was going to bring some medications to the Trade Unions House [Ed. note–the building that was burnt down in February]. The next day, he and I went to Prorizna Street, where they put a bandage on my head. I asked them not to sew up my head, that it would heal on its own. Hell resumed on Maidan that very day, I couldn’t help but go there. I went there, I don’t remember how long I stayed there for, my head started spinning. I went to Mykhaylivskiy Cathedral, we laid down there. Svitlana and her husband Leonid took us in, she applied a head bandage, we woke up in the morning, cleaned up, and [found out that] she laundered everything, because my clothes were covered in blood.

I felt so sorry for that young man on Shovkovychna Street… I ran towards him. I couldn’t have done anything else, otherwise they would have killed him then and there.

Afterwards, I remember how a man carried the lad. His eye knocked out, his skull damaged, blood nearly bubbling, we brought him to the emergency room…

Just as we arrived at Shovkovychna Street, they had forged iron gates there–a man let us in. We were saved for the second time. He hid us in his office. We waited over there, since Berkut was already near the Zhovtneviy Palace. What a great guy, he wasn’t afraid to open his office and hide us there.

We would have held against Berkut if people hadn’t panicked. Because when people panicked, Berkut ran after us and attacked us from behind. Four Berkut policemen against one [protester]. The person is already on the ground, why would you?” 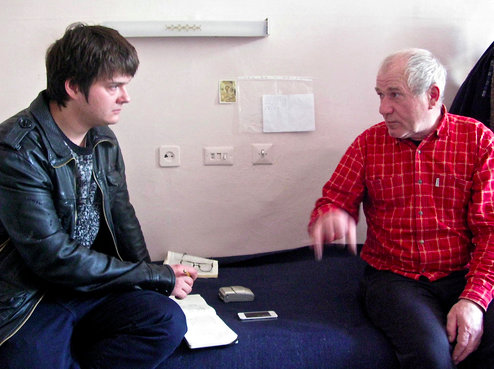 Artist Dobrynya Ivanov talked to Volodymyr Popadiuk at Oleksandrivska Hospital. Dobrynya took a photo of the protester during their converstation.