By Nadiya Savchenko, posted by FreeSavchenko.com
Posted on 11.04.2016
Translated and edited by Voices of Ukraine 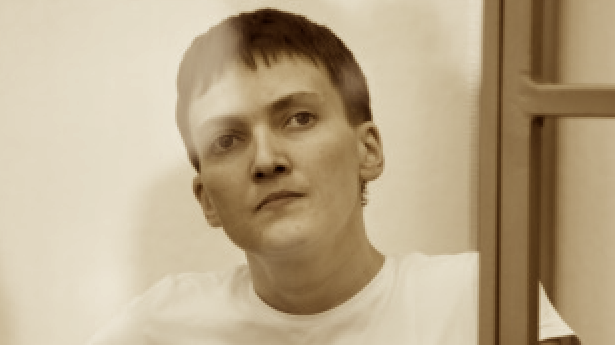 “To those who wish to hear,

I would like to tell you what’s going on – from a first-hand source, so that no one distorts anything.

While my health is deteriorating to the point of my life hanging by a thread, the Russian imperialist-totalitarian machine is trying to prevent any part of the global community from seeing that. For a long time, this was the exact same way they would hide all Ukrainians they had kidnapped, hide them in different prisons after subjecting them to torture. Refusing to let Ukrainian Consuls or lawyers see them until the signs of torture were gone. Even today, many Ukrainians remain hidden – those who were tortured with chemical injections and those who lost their minds. Those who were tortured by beatings and electric shocks were only shown when the burns and bruises healed.

The Russian government is trying to hide my condition right now, because it has worsened a lot. I have refused medical attention from Russian doctors, and my long-term hunger strike, which became a dry hunger strike [VoU note: since April 6], quickly undermined my health. I wrote a statement demanding medical professionals from Ukraine or independent doctors from Europe. They [the Russian government] really don’t want to show the world how people are being tortured in Russia, so they started threatening to force feed me. After realizing that threats don’t work on me, they moved on to a different tactic, called “let’s talk about this.” They even sent a special person from Moscow for this. I have already been through this, when I was on hunger strike last year, in Moscow’s Matrosskaya Tishina prison; I even wrote about it in my book.

This time, they explained to me that the matter of [allowing a visit by] Ukrainian doctors is being resolved, but by the time all the bureaucratic paperwork is done, I would already need hospitalization in the ICU, where only Russian doctors would ever be allowed. So they are trying to hide me every time Ukrainian doctors come to visit me, so that they won’t see the real picture. Or spout nonsense, like Lavrov, the head of the Russian MFA blurted last year, “Her behavior was bad, so we’re not going to let the doctors see her. She is simply faking it. Her health is fine, it’s her behavior that’s bad…”

What a total idiot! So, if a person is dying while behaving badly, she is not worth saving! This is a whole new Hippocratic Oath of Russian doctors! Because doctors swear to save even enemies! The horse-headed Lavrov was probably bad at school and never learned anything about this.

This is why this time, when they realized they won’t be able to hide me because the global community won’t allow it, they decided to talk and come to an agreement with me.

They explained that tests are required, so that they would have something to show to Ukrainian doctors, to process their permit. “Otherwise, why are they coming here?” [is the reasoning] I had already refused to do any tests, long ago, but today, I agreed to give samples of blood and urine – I can sure spare some! My blood was like tar, they barely managed to suck it from me; and I managed to squeeze out three drops of urine from my parched body.

When the results came back, everyone was plunged into shock! [There are medical] indications for immediate ICU hospitalization, and, apparently, my heart can stop any moment now. Well, they’re definitely going overboard there, since I wasn’t feeling THAT crappy!

Maybe they’re exaggerating, maybe not – I’m not a doctor, and don’t have the knowledge. Maybe doctors can understand this better, but I’ll explain it like this, in plain human tongue: there is a blood thinner, sodium (Na), and a blood thickener, potassium (K). When their ratio is normal, blood thickness is right, and it clots properly. With too much sodium (Na), blood doesn’t clot well; with too high potassium (K), blood becomes thick like tar, and the heart, like an engine, has trouble pumping it through the veins.

My test results are: sodium (Na), with the norm being 146, is at 117 (too low), and potassium (K), with the norm being 3.6, is at 17 (four times the norm). As a result, a blood clot can block the heart valve at any moment. The solution is to thin the blood with fluid, and to do that, I should drink water. My response – the hell I will! “Then an IV drip, because, come on, we can’t show you to Ukrainian doctors like this!”

I allowed that, which became a ticket in for Ukrainian Consuls, who hadn’t been allowed in to see me for a week already, and for Ukrainian doctors. They shot me up with 800 ml of glucose and sodium chloride. Tomorrow will be another test, if the [sodium and potassium] values are normal, Ukrainian doctors will be let in, and if not, we’ll bargain some more. I’ll leave the rest of our unofficial discussions behind the scenes. That’ll be something to write about in my next book… 😉

So this is the way it is! And those GRU guys started f*cking around in Ukrainian court! [Ed: she is referring to the 2 Russian servicemen, Yerofeyev and Aleksandrov, on trial in Ukraine who have changed their stories]. Did they forget how Russia abandoned them and denounced them?! Don’t they realize that with my suffering, I’m also winning freedom for them?! Because if I die here, they’ll die [in Ukraine] too! On the other hand, we have other people for an exchange! So if they keep f*cking around, they’ll end up overboard! I’ve got nothing to lose! 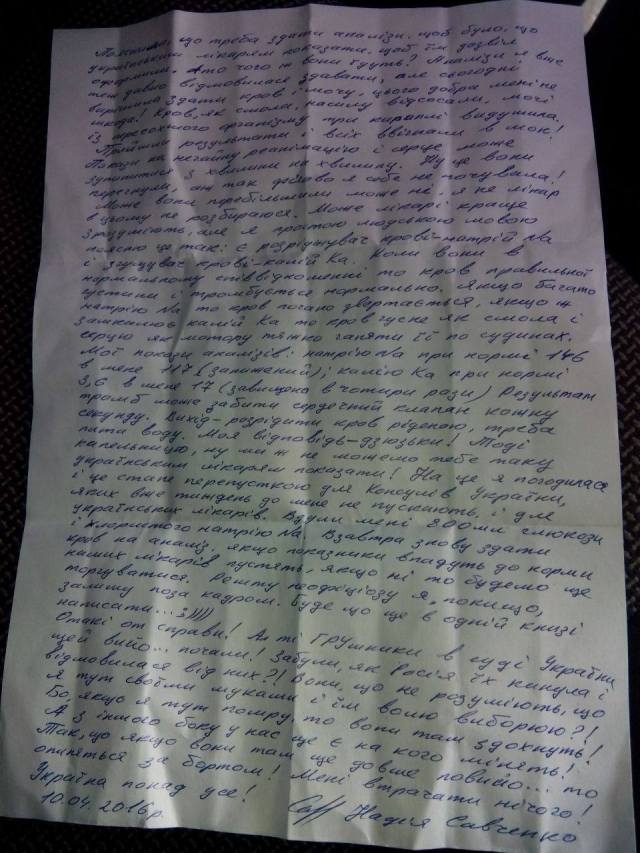