By Mustafa Dzhemilev
03.18.2016
Translated and edited by Voices of Ukraine 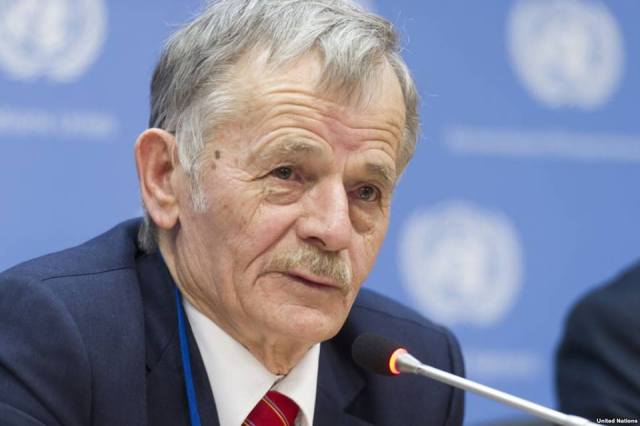 “Dear members of the UN Security Council, ladies and gentlemen!

A month ago, it was 2 years since the beginning of the occupation of the Crimean Peninsula by Russia’s armed forces. The day before yesterday, March 16th, marked the 2-year anniversary of the so-called “referendum,” which was organized by the Russian authorities to give some “legality” to the Russian Federation’s annexation of this occupied territory.

As of the time of this “referendum,” Russian armed commandos without insignia had already captured almost all of the public institutions in Crimea. All the TV and radio channels were also captured, and their frequencies used to broadcast Russian propaganda. So called “self-defense” gangs roamed the streets, made up of underclass elements [of society] and armed mostly “with sticks.” Those who tried to publicly express a negative view of these events faced unpleasant, even lethal, surprises. For example, Reshat Ahmetov, a 39-year-old father of three, who came out onto the central square of Simferopol carrying a Ukrainian flag and [a banner with] the slogan “Down with the occupation!” He was seized by a detachment of the so-called “Crimean self-defense,” which was headed by the current “prime minister” of Crimea [Sergey] Aksyonov and taken to an undisclosed location. The day before the “referendum,” his dead body, blinded and bearing signs of horrible torture, was found on the outskirts of the city on the other side of Crimea.

We were pleased to see that this time, the international community was not so indulgent with the aggressor’s actions, unlike the Russian attack on and partial occupation of Georgia in August 2008. Few were impressed by the ludicrous and absurd arguments of the aggressor country, claiming that [the annexation] was the will of the inhabitants of Crimea, and that [Russia’s actions] protected them from the savage Ukrainian nationalists. Thus, as we know, on March 27, 2014, the UN General Assembly adopted a resolution condemning the illegal “referendum” and the annexation of Crimea, by an overwhelming majority, with only ten small countries voting in favor of the aggressor. But this resolution was ignored by Russia and did nothing to reduce its aggression against Ukraine.

Less than one month later, on April 7, 2014, regular Russian troops, together with militants trained and armed by Russia, began military operations in eastern Ukraine, resulting in the occupation of parts of the Donetsk and Luhansk oblasts, of a combined area approximately equal to the territory of Crimea.

According to some sources, by May 2015, the number of dead Ukrainian soldiers and civilians, including young children, approached 10 thousand, with thousands more people left disabled for life. About 2 million people have become refugees. The financial damages from the shelling of Ukrainian territory by Russia and their mercenaries in the Luhansk and Donetsk oblasts, is countable in the hundreds of billions of dollars.

I believe that my colleagues from Ukraine will elaborate further on the human rights situation in occupied Crimea. Myself, I would just like to list the most important [human rights issues], mainly checking them against the requirements of the Geneva Conventions of August 12, 1949 on the protection of civilians in occupied territory.

A terrorist regime has been established in occupied Crimea, which in many ways resembles the worst years of the Soviet communist regime.

Democratic freedoms that existed on the territory of Crimea since the proclamation of Ukraine’s independence, have been completely eliminated starting from the first days of the Russian occupation.

At all international conferences, Russian authorities are boasting that almost all the inhabitants of Crimea voluntarily received Russian passports and became Russian citizens. In fact, there has never been and still isn’t anything voluntary about it. Those who do not have Russian passports simply cannot exist on the peninsula – they can neither study nor work, nor establish property ownership, nor get medical care. The indigenous peoples of Crimea, who wish to remain in their homeland, in their homes, which they had worked incredibly hard to rebuild after returning from the places of Stalin’s deportation – if they do not wish to receive Russian passports, they are forced to ask their occupiers for the right to reside as nationals of a foreign state. And the occupier’s quota for issuing residence permits is no more than 5 thousand a year.

Article 49 of the Geneva Convention of August 12, 1949 on the protection of civilians clearly prohibits the deportation of the inhabitants of an occupied territory. Even in the first weeks of their occupation, the occupation authorities had already deported the leaders of the indigenous people of Crimea, the Crimean Tatars. The occupiers’ subsequent strategy concerning the indigenous inhabitants of Crimea, is to resort to persecution, iniquity, and humiliations of their dignity and religious feelings, so as to make them leave Crimea of their own accord.

The same article of the Geneva Convention prohibits the occupying power from relocating parts of its own population to the occupied territory. But according to the official data of the occupation authorities in Crimea, no less than 15 thousand people have been brought from Russia. Most of them are officials at various levels. If we add to this no less than 70 thousand Russian troops in Crimea, as well as thousands of ordinary immigrants from Russia, who are receiving land plots for free or on preferential terms, the number of Russian citizens in occupied Crimea is at least one hundred thousand.

Article 51 of the Geneva Convention of 1949 prohibits enlisting citizens of the occupied territory into the occupier’s armed forces or even auxiliary forces. In my hands right now, I have dozens of military summons, demanding [that the addressees] report to the military commissariat for enlistment in the Russian Federation’s armed forces, or suffer the penalties under the relevant article of the criminal law. Several dozen young men have already returned to Crimea in zinc coffins, after being sent to war in Syria to support the dictatorial regime of Bashar al-Assad.

Intimidation is also carried out by means of arrests and lawsuits on perfectly unjust accusations, made against the people who don’t recognize the legitimacy of the Crimean occupation.

Article 70 of the Geneva Convention of 1949 stipulates that an occupying power cannot subject citizens of the occupied territory to harassment, arrest and trial for actions or opinions expressed by them before the occupation. But several people have been imprisoned for over a year now, including Ahtem Chiygoz, the deputy chairman of the supreme representative body of the Crimean Tatars – the Mejlis of the Crimean Tatar people. They are accused of organizing and actively participating in the meeting against separatism that took place in Simferopol on February 26, 2014 – that is, a full three weeks prior to the so-called “referendum” on the annexation of Crimea to Russia.

According to Article 76 of the Geneva Convention of 1949, citizens who are sentenced in the occupied territory shall not be moved to the territory of the occupying country, but must serve their sentences in their territory. But Ukrainian citizens Oleg Sentsov, Gennady Afanasyev, Alexander Kolchenko, Alexei Chirniy and others, who, after inhuman torture, were sentenced to long prison terms for public demonstrations against the occupation of Crimea, were sent to serve their sentences in the Siberian camps of the Russian Federation.

During interrogations, almost all of the arrested and detained opponents of the occupation regime are beaten and subjected to inhuman torture, including electric shocks. The occupiers have used torture even on persons who are not suspected of anything, but whom the occupiers want to coerce into cooperation. Thus, on December 16th of last year, the 24 year-old resident of Dzhankoy, Yenver Krosh, was subjected to several hours of electric shocks, as a means to force him into writing a statement about his willingness to cooperate with the FSB as an informant.

But the most fearsome and repulsive means of intimidation that the occupiers resort to are abduction and murder. To date, 22 such cases have been registered. The dead bodies of some of these people were found, bearing signs of torture. About the rest, there is no information and presumably, all of them have long been dead. For obvious reasons, the occupation authorities take no action on missing persons, or simply pretend to be searching for them. Moreover, the FSB effectively uses the facts of peoples’ disappearance to intimidate and suppress the will of the people. Frequently, in order to obtain the necessary evidence during the interrogation of Crimean Tatars, FSB investigators will say: “Are you not afraid to disappear without a trace?” or “Are you not afraid that your kids might disappear?”

At present, the occupation authorities are considering declaring the Mejlis of the Crimean Tatar people an extremist or terrorist association, and banning it. The main reason for such accusations is that the Mejlis, which is elected directly by the Crimean Tatar people through democratic elections and therefore, represents all the indigenous people of Crimea, does not recognize the legitimacy of the occupation, and remains loyal to its country – Ukraine. Therefore, from the standpoint of the occupation authorities, it is a structure that represents a “threat to the security and territorial integrity of the Russian Federation.” This matter was up for review in the so-called “Supreme Court of the Republic of Crimea” in Simferopol, but the results are not yet known.

I believe that such actions by the occupiers against all indigenous people of Crimea, and their expanding repressions against all who do not accept the occupation of Crimea, are sufficient reasons to introduce new and harsher economic and individual sanctions against the Russian Federation.

I have absolute certainty that no effort of the international community can ensure full respect for human rights in Crimea, until that land is liberated from occupation. Therefore, all measures should aim to force the aggressor to leave all the occupied territories of Ukraine, and to hold the occupier-country’s leaders accountable for all crimes committed on the territory of Ukraine.

Thank you for your attention.

Source: Representative of the President of Ukraine for the Crimean Tatar people, Mustafa Dzhemiliev FB page