1. Today, terrorists attacked the checkpoint “Marynivka” on the border with Russia from both the Russian and the Ukrainian territories. Ukrainian border control guards fought back.

Just before that, the Russian Foreign Ministry expressed “outrage” at Ukraine’s decision to block the Russian border. Immediately after this cover statement, insurgents attacked from the territory of Russia.

If anyone has any doubts that Russia engages in the close coordination of Ukrainian terrorists and throws legions of its mercenaries at them for their assistance–then I don’t know to whom, or what, arguments are still needed. It’s all clear as day.

2. In Europe, the ongoing debates as to whether France should or should not supply Russia with “Mistral” helicopter carrier ships continue.

European gentlemen, let’s once and for all call a spade a spade. “Mistral” is a weapon of aggression. Its primary purpose is amphibious operations. That is [amphibious] attacks.

Russia can attack either Ukraine, Azerbaijan and Georgia, or the NATO countries in the Black Sea. Deliveries of such weapons to Russia constitute cutting a branch the NATO sits on, or an extremely unfriendly step towards Kyiv, Baku, and Tbilisi– i.e. those whom Brussels itself calls its “friends” and “partners.”

And don’t bleat about the economic feasibility. If some bastard beats up my friend, my sacred duty is to come to my friend’s assistance. And not to give the bastard a baseball bat, relaying in words how I empathize with my beat-up mate. Enough hypocrisy. 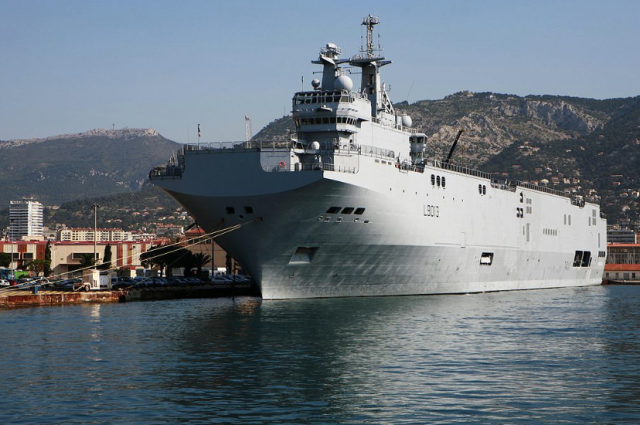 The day before yesterday, he said that no one had invaded Crimea, that the Russian military wasn’t there, and that the Crimeans had occupied themselves.

Yesterday he said that there was a seizure of Crimea on the basis of some opinion polls, according to which it had been allegedly revealed that Crimeans wanted to become part of Russia en masse.

Now he prophesies that the occupation of Crimea was perpetrated by Russia because there were supposedly no guarantees that Ukraine would not join NATO.

Well we have no guarantees that tomorrow Putin won’t turn out to be an alien visitor with privates on his forehead who devours human flesh, and then what [do we do] next?

But we have a guarantee that this gentleman is mentally ill. The only question is what to do–isolate him or still lull him away from sin? This is a subject for global debate.

1. At the briefing today, I criticized the actions of the State Border Service, which resulted in the state border partially being exposed. Immediately after that, I had a conversation with representatives of the border service leadership.

We were provided with information about the creation of motor-maneuverable groups, and the redeployment of border service units. I sincerely believe that, indeed, the alarming signs from the border over the past two days are a very temporary phenomenon related to “reformatting” of border protection and defense.

Basically, today’s events near “Marynivka” checkpoint are evidence that the “combat capabilities” of the border control guards have increased dramatically. God willing.

2. The Verkhovna Rada [Ukrainian Parliament] has “improved” legislation to combat terrorism. In particular, they expanded the range of subjects in such a combat and provided conditions for the ATO [anti-terrorist operation].

In fact, we are now patching holes in our laws relating to national security. The buildup is happening slowly, very slowly. But nonetheless.

3. Russia has become entangled in its own lies about the “refugee influx” from Ukraine.

Another little liar from the Kremlin cohort named Dima [diminutive of Dmitry] Medvedev has tirelessly insisted today that refugees from Ukraine, in Russia’s Rostov Oblast, are a dime a dozen. As in, that Ukrainians just flock to Russia in droves for the refugee status. “Now the number of those who applied [for refugee status] constitutes 4,000 people, this is an unprecedented situation,” prophesized the Russian Prime Minister, with his little eyes bulging.

But here’s the thing: at the same time, the authorities of Rostov Oblast denied this nonsense about refugees. As announced by the Press-Secretary of the Deputy Governor, Aleksandr Titov, Ukrainians arriving in the region “come to rest or to visit their relatives in other regions of Russia,” as in, there is always a stream of guests and tourists during vacation season.

Here’s the lesson for Dima Medvedev and the Russian media: when lying, negotiate with the local authorities. Or you’ll end up with an inconsistency. To the amusement of the whole world.