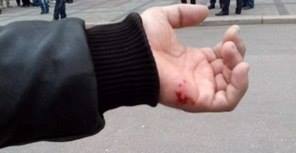 An “anti-Fascist” bit someone at a rally by the Dnipropetrovsk Regional State Administration (OSRA).

About 150 Self-defense activists were present at the rally. Meanwhile around 40 “anti-Fascists” gathered in Lenin Square. During the altercation one of the anti-Fascist representatives bit one of the members of the Self-defence group.

According to eyewitnesses, one of the anti-Fascists left his camp and wandered around Self-Defence members with a stick in his hands. He was asked what he was doing. A verbal argument broke out. During the argument, a bully from the opposing camp bit one of the Self-defense members. He was captured and sent to the police station.

Rabid dogs. There’s no other word for it.

1 Response to Biting incident in Dnipropetrovsk