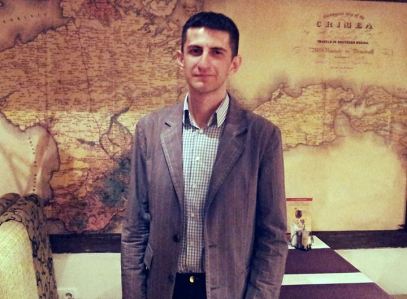 By Maidaners
03.20.2014 Facebook
Translated by Paweł Łapiński and edited by Voices of Ukraine

Alim is a 25 year old media consultant. He is one of the people involved in launching the Crimea_SOS initiative in social networks.

Everything began on the morning of February 27, 2014. It was already known that crowds of “little green men” with strange intentions were coming to Crimea. “No one understood what was going on yet,” remembers the young man. He called his friends – Tamila Tasheva and Sevgil Musayeva. Together, they decided to create an information resource about Crimea. They received a lot of conflicting information, and it was necessary to verify and collect it in one spot. That’s how they founded Crimea_SOS.

Soon, people started calling Crimea_SOS to report operational information from the peninsula. But also to offer their help. Many calls came from residents of Kyiv and Lviv, who said that they could host refugees from Crimea. “Some people were ready to invite Crimean families even with dogs and cats,” says Alim. Volunteers began to create a database of those who wanted to leave Crimea and those who were willing to host refugees.

Crimea_SOS began to expand, volunteers offered their help, a call center was set up, as well as a group of English translators. Up to 60 volunteers work at Crimea_SOS on critical days. Volunteers have set up a shift schedule. The hot line is available 24/7. The Crimean Tatar association in Kyiv have provided the initiative with work space. However, Alim emphasizes that Crimea_SOS works to provide assistance not just to Crimean Tatars, but all Crimeans who are against the occupation [of their land] and don’t know what to do next.

Another line of their work is to help Ukrainian servicemen on the military bases. Crimea_SOS has established contacts with them. “The [military] bases needed everything, from socks to barbed wire,” explains Alim. “But after the referendum, delivering something to the bases became much more difficult,” he admits.

Alim is also originally from Crimea, he’s still registered there, but for the last 5 years he has been working in Lviv and Kyiv. His parents, Crimean Tatars, live in a village nearby, in the city of Saky, and are not going anywhere. “My Dad says that they haven’t returned to the land of their fathers to leave it again now,” says Alim. What’s more, they finished remodeling their house only two months ago. My parents don’t know yet how to live in this new reality. But they won’t give up their Ukrainian citizenship. “I worry about my family and friends,” he says.

Crimea_SOS continues their work. There are many people left in Crimea who need this initiative. 45,000 people have already subscribed to the Crimea_SOS Facebook page.