This morning, Feb. 20, despite the truce announced last night, clashes were renewed on Maidan, in the center of Kyiv. It is as yet unclear who fired the first live shots, a number of varying reports circulate. According to some reports, protesters started advancing after riot police attempted to set fire to the conservatory, where the wounded were kept. Other reports say that the first shots were fired from behind enemy lines.

As of 11 am, snipers are at work. Over ten people reported dead.

Events of this morning, continued from:
https://maidantranslations.wordpress.com/2014/02/20/war-against-the-people-in-downtown-kyiv-today-feb-20-morning-908-to-1046/

As yet there is no conclusive information as to who fired the first live shots.

Some reports say that the first live shots were fired from the roof of the Conservatory, which was behind the law enforcement cordons. Since the Conservatory lies behind police lines, it would have been extremely difficult for protesters to take firing positions there. This gives ground to the assumption that the killing shots were a purposeful provocation by government forces. Another report says clashes were renewed when Berkut started throwing Molotov cocktails and/or grenades at the Conservatory. As protesters moved to put out the fires, snipers started shooting – at first, from the police lines, then from behind them.

Ruslana announces that she will stay at Maidan till the end. Calling all representatives of embassies to Maidan. Calling the press here, to make sure everyone knows what’s really going on.

Christopher Miller:
More than 50 captured police led inside the energy building next door to the Kyiv City Hall. 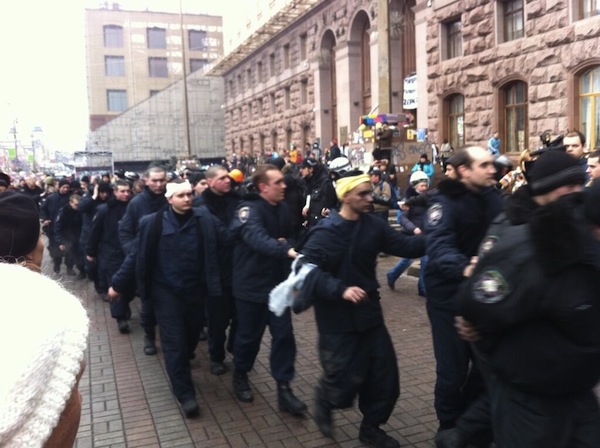 Olga Bohomolets::
A sniper is operating near Hotel Ukraine. Be careful! Already dozens of wounded and, tragically, 3 dead. Please bring ambulances as close to Hotel Ukraine as possible, to bring out the wounded.

Magnolia-TV:
EuroMaidan twitter reports that members of Maidan Self-Defense captured one one of the snipers. He is currently in Maidan headquarters.

“Regional” Pavlo Lebedev Gives Criminal Order to Armed Forces
40 train cars packed with military are heading towards Kyiv. Sources in Ukrzaliznytsya [Ukrainian Railroad] inform that the trains set out from Kremenchuk, via Poltava, on the night of 19/20 February.

“Information has been verified, they’re heading through Poltava and to Kyiv,” sprotiv.org informs.
It is unknown whether armed forces are also approaching Kyiv from any other directions.

Everyone called to the barricades. A perimeter is being formed around Kyiv, in an attempt to stop army units from entering the city. Near entrance to Kyiv, a lot of armed plainclothed men are standing by. Orders are given online every five minutes. The stage at Maidan is the main coordination center.

Turchynov speaking from stage: We must have iron self-discipline to win. We must create our victory, not more problems. There’s a chance to call a parliament session at 3 pm. MPs will be given guarantees by Maidan. All of Ukraine is currently advancing.
Oleg Lyashko confirms that the MPs will have a guarantee that the Parliament would not be stormed during the session.
Tyhypko announces that the President, Acting Prime Mister, and the Parliament speaker have entirely lost control of the situation in the country, and calls for people’s deputies to immediately form a new government.

Lenta.ru:
Lenta.ru, referring to Reuters, reports that the Ministers of Foreign Affairs of Poland, Germany and France, who came to Kyiv on February 20 to meet with Victor Yanukovych and the opposition leaders to discuss resolution of the conflict in Ukraine, cancelled their meeting and took a plane out of Kyiv.

Reuters sources in the diplomatic circles say that the meeting with the President of Ukraine were cancelled “for considerations of security.” They did, however, meet with the opposition representatives.

Lenta.ru:
Russian Prime Minister Dmitry Medvedev: “Russia will continue its cooperation with Ukraine, if the government in the country is legitimate and effective.”

At least SIXTEEN Killed by Snipers – Shot to Head and Neck. PHOTO and VIDEO

Censor.net:
Blogger Alexey Perkin writes:
“Came down to Maidan – eight corpses laid out by McDonalds, eight more at the front lines. Hundreds in ambulances…” The McDonalds is still an emergency medical station.

[MORE VIDEO HERE] One of the sniper traps set by Berkut, possibly on Instytutska Street, just outside the barricade perimeter of Maidan 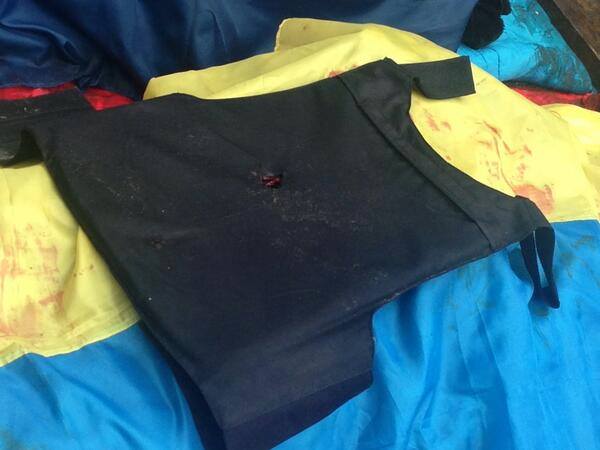 Svitlana Svetlycnha:
UKRAINIANS! Our friends from Russia tell us that 24 titushkas set out from Kronshtadt, guys aged 24-28! They’re all under investigation (thefts, drug dealing, etc.). The Kremlin sends them to Ukraine in exchange for dropping charges! They are escorted by 4 FSB [Russian Security Service] officers! They’re already in the Pulkovo airport. This information was given to a friend by one of these titushkas, who doesn’t want to go to the protest-filled Kyiv. The person in charge of them is Mykhailo Bakhmatsky. Three more similar squads are with them, from other parts of Russia!

The world must know that this is a criminal occupation on behalf of the Kremlin! Let the international observers know! The Kremlin can’t get away with this!

These creatures are being unloaded at Naberezhna, Parkova Road, near Ascold’s Tomb, near Slava Park, and Salyut Hotel. They’re setting out on foot, in different directions, some to the Left Bank [of the Dnieper].

Glavcom:
Correspondent of Glavcom reports that the titushkas stationed in Mariyinsky park are running towards the Dnieper waterfront. Hundreds of young people were seen running down the hills from the park, most aggressive and disoriented.
Reports of clashes with firearms at Maidan triggered a rapid retreat of enforcers and Titushkas towards Arsenalna subway station.

Helmet of a dead protester, perforated by bullet

Women telling about their friends who died today 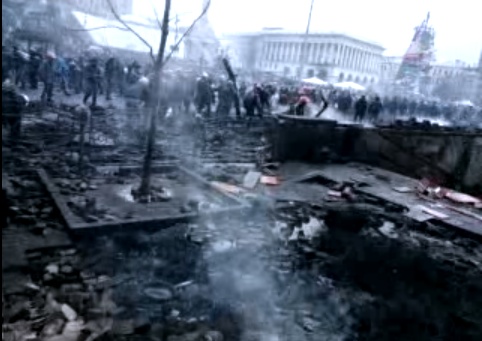 11:15, territory taken back from Berkut