VOICES OF THE REVOLUTION: Lesya Orobets – They who defeat fear will win…

Posted on February 9, 2014 by chervonaruta 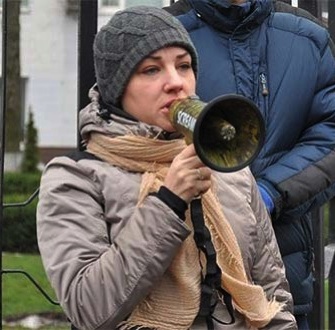 Yanukovych’s actions are easy to understand. In fact, very easy. Just put yourself in his position, and look at the situation through a lens of fear.

Fear of losing power, and consequently, losing the looted money and wealth. Fear of dying. Fear of open competition. Fear of a sucker-punch (and thus, the desire to hit first).

Looking at the situation through Yanukovych’s lens of fear, one can understand the actions and reactions of the repressive throne-protecting machine, which they still keep calling the Ukrainian state.

Some still wonder why Berkut and others are so cruel – ‘they are Ukrainians….policemen!’ No, they are defenders of the throne. The majority of Berkut knows that this is Putin’s throne, and not Yanukovych’s. As one of them said in an interview on Hrushevskiy St., “our backs are against Moscow.” This is not an oath sworn to the citizens of Ukraine and its Constitution, this is a clear deal with Moscow.

Because of Yanukovych’s fear, we will not see any elections where the Party of Regions takes less than 70% of the vote. This will not happen while he retains any political control. I don’t get what the parliamentary party leaders are thinking about, as well as those young ambitious politicians that aspire to become MPs, meanwhile masking themselves as civil activists.

Yanukovych will never yield so much as a raindrop of power voluntarily. Only if he is forced to, he might. This, I guess, is understood by all now. For the last 2 months his repressive machine has only toughened.

It’s because of his fear of open competition that speakers on pro-government demonstrations are hardly to be found. Mr. Markov, formerly an MP, is jailed; he was too original. The Party of Regions is just overflowing with brilliant politicians, so they have to pull out clowns like Mr. Kalashnikov from the attic, just to inject a teaspoon of drive into the mournful congregation in Mariinsky Park near the Verkhovna Rada [Parliament].

About his fear of treachery. All the manoeuvres around Putin are meant for protection against foul play from his side. A fear that Putin would betray him and shift all the power to Medvedchuk. Or somebody else. Or even crowd ministerial chairs with FSB officers — those guys won’t be content with merely law enforcement positions, they would take the dearest — the tax office, the state procurement, all the fishy building schemes.

We can roughly guess what the meeting with Putin in Sochi is going to be about (hopefully, it was not conducted in the infamous double-seated toilet stall). But it is pretty clear, that Yanukovych’s fear will hang like a colossal dark cloud above this meeting. Putin is going to play upon fear, and only fear, in seeking his sole goal in this drama — the total annexation of Ukraine and her supply of human horde, no less. Those who fail to see that, take a look at the photo of the last Eid al-Adha in Moscow. 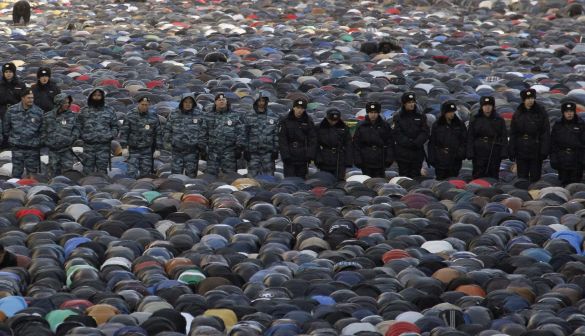 The recipe for victory over Yanukovych is as easy as a door: do not fear him.

When you stop fearing Yanukovych and his organized group, it becomes apparent that the emperor has no clothes. That’s why they are putting all their resources into instilling fear, personal insecurity and despair — through all their demonstrative beatings, arsons, frozen corpses in the forest, shootings with brass bullets, and now a booby-trap, labelled ‘medications,’ that blew up two young boys.

For that same reason they circulate clownish drug addict nutters in the media. Firstly, to scare normal townsfolk: ‘see?, they are drug addicts, they might do anything.’ Secondly, they inspire their comrades: ‘see?, you just take one and become a tough guy, FATHER will appreciate this and grant you a fat post to milk the plebes.’ Hitler’s regime, and every other dictator’s, stood upon the animal fear of its citizens. Because the crooks are always in a minority, and liberation of the normal folk is deadly for them.

That’s why they tug and pull and parlay on negotiations, at the same time furthering the creeping terror against individuals.

The recipe for the victory over Yanukovych is simple. Citizens must stop fearing him. The Regions must start fearing their electorate more than a meeting with Yanukovych in the Verkhovna Rada’s cinema. Oligarchs must fear for their money in Western banks more than Yanukovych. And, nobody will do that work for us.

Ukraine and the Ukrainian people will win this time.