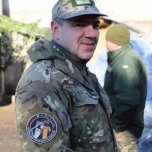 I really do not like the “Anaconda-16” exercises that have begun today. I mean, I am certainly happy about 31 thousand brave men who will run, jump, drive around on 3 thousand armoured vehicles (three thousand!).

And of course, I would have liked the look of all this action.

I don’t like, purely egoistically, the reason for conducting these exercises and their composition. In case someone doesn’t know, most of the soldiers, even more than the Poles, will be US servicemen. 13.9 thousand. That is really a lot. It is really expensive. To send 14 thousand men on exercises to another continent is ridiculously expensive. And they don’t get money for all this from under the mattress. In the States there is a whole procedure of allocating funds for such games for big boys. And there is no president there who can drive up to Congress and bend 300+ people to vote his way. There they can all count and will tell the president where to go if he starts spending money unnecessarily. Which means that these expenses are justified.

And that is what I don’t like. The NATO bloc sees a real threat. NATO is preparing and demonstrating preparedness.

Muscovy is pulling in troops and NATO is pulling in troops. And we are a buffer zone which could become a theater of war at any moment. You don’t believe this? Pity. The newly formed brigades and the filling up of training centres with conscripts, and the excesses with the draft, are all indirect signs that in Kyiv they understand this and are preparing specifically for the worst-case scenario. For the possibility of mass involvement of reserves which will be made up of all these conscripts and of demobilised ATO veterans. And meanwhile Ukraine has relaxed, explaining this as war fatigue. While with rare exceptions, the war hasn’t even really started yet. The war is only on the line of contact. With news and bulletins that are already treated as noise and as just numbers. Don’t switch off and don’t lose touch with reality. Otherwise later on, the shock will be sudden and painful. The war is on. The war continues. And it has not subsided. Only there is some global realignment going on right now. And it can start any day. And out there where it goes on, on the front line, we still need your help.