Dmitry Tymchuk, Head of the Center for Military and Political Research, Coordinator of the Information Resistance group, Member of Parliament (People’s Front)
05.10.2016
Translated and edited by Voices of Ukraine

During the shellings and provocations in the ATO zone, Russian-terrorist troops continue using small arms (including heavy machine guns), stand-mounted grenade launchers (in three recorded instances, including antipersonnel AGS-17 type, and anti-tank SPG-9M type), ZU-23-2 anti-aircraft cannons, and the on-board weaponry of armored vehicles. In addition to that, militants continue actively employing small infantry groups and DRGs to reconnoiter the ATO forces’ advanced positions and combat lines in the tactical depth. Terrorist sniper groups were active on some stretches.

In an area southeast of Luhanske, militants continue shelling the ATO forces’ advanced strongholds and observation points, using, among others, sniper weapons, grenade launchers, and the on-board weapons of armored vehicles (BMP-2). The enemy’s sabotage and reconnaissance groups have sharply stepped up their activity on the Lozove–Svitlodarsk–Sanzharivka stretch.

The situation remains tense in the vicinity of Avdiivka‘s “industrial zone” and adjacent areas (militants mainly operate from the “greenery”), as well as southwest of Avdiivka, as far as Pisky. In the vicinity of Mar’inka and Krasnohorivka, militants are also employing snipers and DRGs, while south of Donetsk (near Novotroitske and Berezove), terrorists are shelling Ukrainian advanced positions in permanent mode, using heavy machine guns and SPG-9M.

Further south, in the coastal regions, [we recorded] shellings from AGS-17’s, heavy machine guns, SPG-9M’s, and the on-board weapons of armored vehicles.

“DNR” units continue attempts to observe and track down the Ukrainian troop control and command points, as well as their movement in Donbas, using UAVs and radio surveillance stations. When tracking the movement of the ATO forces’ units, terrorists mainly continue focusing on the points of aggregation of active mobile phones. The effectiveness of this method decreased sharply after strict regulations were enforced concerning the use of mobile communication by Ukrainian military servicemen in the ATO zone. The “DNR military intelligence” units have mentioned this multiple times in their recent reports to their Russian supervisors.

The “DNR,” using militant-controlled media and social networks, is actively spreading information that militants allegedly destroyed a large number of combat equipment and “punisher” [Ukrainian Armed Forces] personnel by a “large-scale retaliatory artillery strike” against one of the Ukrainian Army units “involved in the shelling of Olenivka.” According to the IR Group’s information, these reports are false.

Yesterday, May 9th, in the Kuibyshevskiy district of Donetsk, after the “Victory Day military parade,” two “servicemen of the Army of the DNR” who had taken part in the “parade,” were celebrating with a drink and in the process got robbed by their new drinking buddies from the local population. A group of terrorist was letting off shots in the air while intoxicated as part of the celebration, and a “DNR” militant received a gunshot wound (shattered collarbone) as a result.

The “DNR” leadership continues increasing the combat capacity of its “”marines” units. The latest joint training of the “DNR marines” and the Russian Armed Forces marine units between Bezimenne and Samsonove (Novoazovskiy district) involved the use of a small craft (“landing assault craft”), four BMP-2’s, and a Zoopark-1 target locating and fire control system [a counter-battery mobile radar system]. The focus of the training were firing exercises with the use of BMP’s and small arms. Simultaneously with firing exercises, personnel practiced beach landings (the assault craft would approach the shore at low speed, and groups of 10-15 personnel would perform the landing and practice various aspects of capturing and holding a beachhead).

The “LNR” leadership sent out an instruction to the units of the “LNR 2nd AC,” informing that units of “Turkish terrorists” from the Grey Wolves (Bozkurtlar) organization as well as a “brigade of Baltic mercenaries” are supporting the ATO forces near the demarcation line in the vicinity of Stanytsia Luhanska. Militants attempted to relocate local civilians from settlements near the demarcation line, under the pretext of “rescuing them from the mercenaries.” 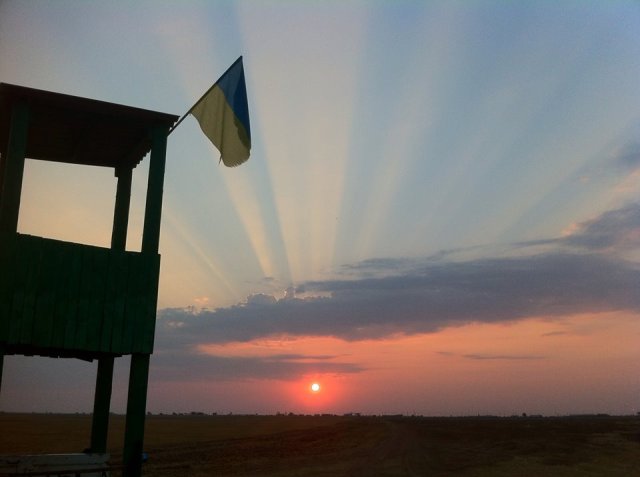