Dmitry Tymchuk, Head of the Center for Military and Political Research, Coordinator of the Information Resistance group, Member of Parliament (People’s Front)
03.18.2016
Translated and edited by Voices of Ukraine

Due to the presence of the OSCE representatives in the vicinity of Avdiivka, militant activity notably decreased in that area. However, Russian-terrorist troops continue active shellings in other sections, using, among others, 82 mm and 120 mm mortars, and ACVs.

At the same time, at least two militant tank groups (2 tanks in each) are observed in the vicinity of Avdiivka, beyond the E50 highway from the side of Yasynuvata. The tanks are camouflaged at positions. Terrorist 122 mm artillery also remains in position near Yasynuvata; it is a battery of D-30 howitzers that had previously shelled the ATO forces’ positions near Avdiivka.

Near the northwestern outskirts of Spartak, terrorists opened fire from an SPG-9M stand-mounted grenade launcher (even though “OSCE observers” were present north of that area at the time). Fire was directed at the ventilation shaft of the Butovka mine and the “Zenith” stronghold. 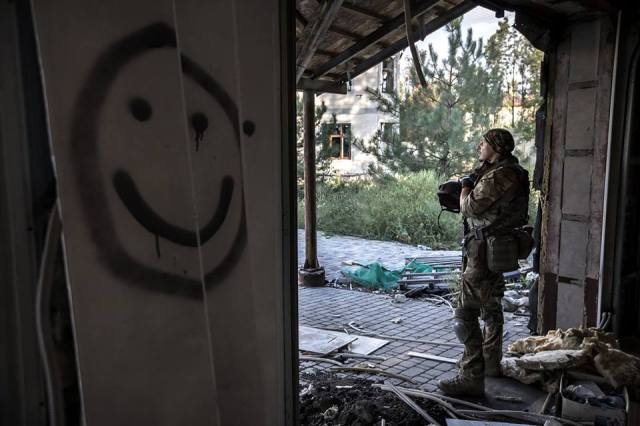 Two new “hotspots” have emerged. One is the area of Dokuchajevsk, where the ATO forces’ strongholds to the east and southeast of Novotroitske are being shelled. The second one is in the coastal region: the stretch between Shyrokyne and Vodyane. In both cases, militants use 120 mm mortars, while near Dokuchajevsk they also deployed armored vehicles. The landscape of the area (rich in ravines and quarries) allows militants’ armored vehicles to covertly approach the ATO forces’ advanced observation points and strongholds, and carry out precision fire from their on-board guns.

In Donetsk, militant redeployment is apparent in the Petrovskyi district: at least one company of militants is being concentrated in the area of Oleksandrivka, arriving from the east along the Donetsk Bypass (including eight trucks, six BMP-2’s, and two MT-LB’s). Additionally, militants transferred two mobile fire groups (2-3 82 mm mortars and two ZU-23-2’s in each) towards the Zhylploshchadka and Trudovski estates.

Terrorist units south of Donetsk (beyond the Donetsk Bypass, on the stretch Luhanske – Olenivka – Dokuchajevsk) are being reinforced. A militant unit of up to one motorized rifle company in strength was spotted moving towards Dokuchajevsk from the direction of Styla, on board of trucks. South of Olenivka, militants were observed transferring armored vehicles (2-3 MT-LB’s and two tanks), while one MT-LB and two BMP-1’s were transferred towards Olenivka itself. The movements were carried out during nighttime.

The “DNR anti-terrorist spetsnaz [special forces]” is being formed in Donetsk. “Specialists” of the Russian FSB are in charge of this initiative. All measures related to the creation of this unit are carried out in strict secrecy. At the same time, disputes arose among the “DNR” command as to the command chain of the newly-created militant “spetsnaz” – whether it will be subordinated to the commanders of the “DNR Ministry of State Security” or personally to the “DNR” chief Alexander Zakharchenko. For the time being, the unit is being formed under the control of the “ministry.”

Brigade and battalion commanders in the “DNR 1st Army Corps” were ordered to immediately resolve the “ghost problem” in their units, and organize for proper supply of personnel with all types of provisions. According to the information of the “DNR 1st AC,” the amount of supplies and allowances in many units does not correspond to the real number of personnel in them, with monetary and clothing allowance being issued for militants who do not exist. Allowance fraud is particularly rampant at the front line, where the real number of militants in units is hard to keep track of.

The “DNR Minister of Defense” Vladimir Kononov paid a visit to Moscow (Russia). The purpose of his visit was to negotiate on the financing of the “DNR” gangs and to receive funds to cover overdue payments. These payments include militants’ wages, outstanding utility debts of “DNR military units” (heat, power, gas, and water supply), and land tax, covering a period from 05.01.2015 until present day.

In Donetsk, a commission was created to “mobilize real estate” (industrial buildings, facilities, etc.)  for the needs of the “DNR Ministry of Defense.” The task of the commission, controlled by the heads of the “DNR MoD,” is to collect title documents for real estate objects. Each document package must include a written statement of the owner, allowing or refusing to station “DNR” military units within their property. If the owner of the real estate cannot be located within the “DNR,” and/or is not registered with the “DNR tax authorities,” the property is subject to automatic mobilization.

For instance, in Horlivka, the shareholders of “Stirol” CJSC (except for Dmitry Firtash) gave their consent for the mobilization of several buildings on the facilities of their [chemical] works. In Donetsk, several buildings of “DZSK” OJSC [Donetsk Heavy Machinery Works] are subject to mobilization. The latter is intended for the stationing of the 11th regiment of the “DNR 1st AC.” (Previously, the 10th regiment was stationed at this facility, and looted the occupied premises. On 03.11.2016, armed militants arrived at the facility, threatened civilian (female) security guards with fire arms, used a truck to break down the gate, and stole two semi-trailers. Representatives of the “DNR law enforcement  authorities” are investigating this situation.)

Units of the “LNR 2nd Army Corps” received an order from the “2nd AC” command: to observe the regulations for camouflaging weapons and equipment, and to take measures to counteract “Ukrainian spies.” Strict punishments have been instituted for disclosure of secret information and exposure of “units and divisions,” both for rank and file militants, and for unit commanders.

Another “military specialist training” is planned for “LNR” gangs. Teams of instructors staffed by servicemen of Russian Armed Forces have already arrived in “Lutuhyne camps” and at the militant “training center” in Perevalsk.