By Anton Naumlyuk, freelance correspondent for Radio Svoboda
01.18.2016
Translated and edited by Voices of Ukraine 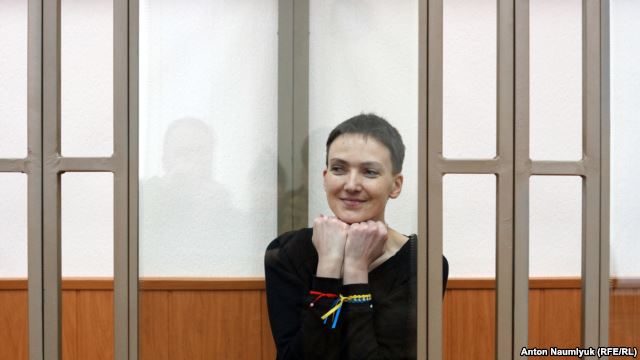 A former soldier of the 80th Airmobile Brigade of the AFU (Armed Forces of Ukraine) Ivan Rusnak, speaking on Monday [January 18] at Nadiya Savchenko’s trial as a witness for the defense, confirmed the Ukrainian servicewoman’s alibi which her lawyers had put forth. According to the former soldier, on June 17, 2014 he fought against separatists from the self-proclaimed breakaway “Luhansk People’s Republic.” The APC [armed personnel carrier] Rusnak was in was hit and caught fire. Together with other AFU soldiers, some of whom were seriously hurt, he evacuated from the burning armored vehicle, retreated into the greenery alongside the road, and organized a perimeter defense to protect the wounded.

That was where Savchenko subsequently found them, as she was walking from a [previous] skirmish towards Luhansk, to conduct reconnaissance and to try to find survivors from the Ukrainian military. 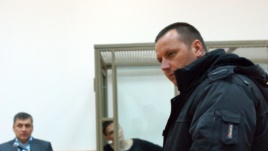 “We had just lain down near Stukalova Balka, and Nadiya came upon us. I saw her first. She was walking toward us right along the ‘greenery,'” Ivan Rusnak described. “Savchenko was heading to the stricken APC, which was smoking, up ahead. Nadiya shouted at us: ‘Do not shoot, I’m one of your own!’ I saw on her a chevron in the form of a Ukrainian flag. She wore a foreign uniform, ankle boots and a green scarf on her head. I even thought it was a man at first, we have guys who wear such scarves.” According to the witness, other than a tactical vest and an automatic, Savchenko had nothing on her, including any backpacks, two-way radios or binoculars which figure in the case as evidence for the prosecution.

“Nadiya gave us first aid, bandaged the wounded, made an injection of anesthetic, told me not to remove the fragment from the neck of one of the wounded, otherwise he would bleed out,” the witness stated in response to questions from the lawyers. “After that, she came out onto the road to call and ask for help. At this time, a shot came from the ‘greenery’ on the other side of the road and wounded her in the arm. She crawled back, and bandaged herself. She said: ‘Wait here now, others will come for you,’ and then she went forward to find and help others who were wounded.”

When answering the prosecutor’s questions, Rusnak said that the meeting with Savchenko occurred at approximately 9:30 am, and some 10 minutes later she headed toward the burning armored personnel carrier, which was captured by the “Zorya [Star]” Battalion, which was led by the current head of the self-proclaimed “Luhansk People’s Republic” – Igor Plotnitsky. Thus, Rusnak confirmed Savchenko’s defense team’s version that the Ukrainian aviator was captured a few hours before the shelling that killed journalists Igor Kornelyuk and Anton Voloshin, and thus, could not have directed it [the artillery fire that shelled the journalists].

After Savchenko left the group of AFU soldiers, Rusnak amongst them, they came under dense fire from assault rifles, machine guns and grenade launchers. According to the witness, he heard a car drive by, but it did not stop. Apparently, this was the car driven by members of “Aidar” Battalion, who went to help the wounded, but did not notice the AFU fighters, and fell into an ambush, into which a few minutes later, Savchenko fell too. In the car was a backpack with the Ukrainian pilot’s documents and belongings.

Rusnak and other soldiers took refuge in a house in the village of Stukalova Balka and waited there until nightfall, at which point, without waiting for help, they independently reached the Ukrainian checkpoint. Several BMPs and tanks had been sent to their aid, but the machines were hit, and the soldiers who made their way to them crawling along the “greenery,” came under fire from anti-aircraft guns, as did the Armed Forces’ helicopters.

The session attended by the former Ukrainian soldier was very tense. Three times in a row the court rejected allowing the witness to  view a video of Nadiya Savchenko’s capture [to have him possibly identify further witnesses], which was shot by one of the militia men – Egor Russkiy, and the defendant’s sister Vira Savchenko was almost removed for her outraged outbursts. As a result, the lawyer Mark Feygin asked the court to facilitate the witness’ “safe return home to Ukraine.” “Do you have reason to fear?” – asked the judge, surprised. “Look, I personally was kidnapped and illegally taken to Russia,” Savchenko stated in response.

In addition to questioning the witness on Monday, the [defense] lawyers have filed over a dozen petitions to exclude from the case materials the prosecution’s evidence collected by First Channel operator Roman Korolenko: Anton Voloshin’s remains and the journalists’ belongings from a hotel room in Luhansk. The judge decided to consider the petitions at the next session, after they are assessed by the prosecution.