The Price of A Hunger Protest #FreeSavchenko

Posted on January 9, 2016 by chervonaruta

The debate over how warranted Nadiya Savchenko’s [second] hunger strike is continues for the third week. [She announced it on December 17, 2015 and began it on December 18th according to her lawyer Mark Feygin]. 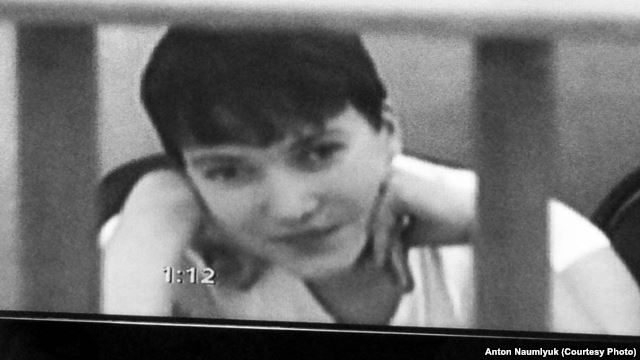 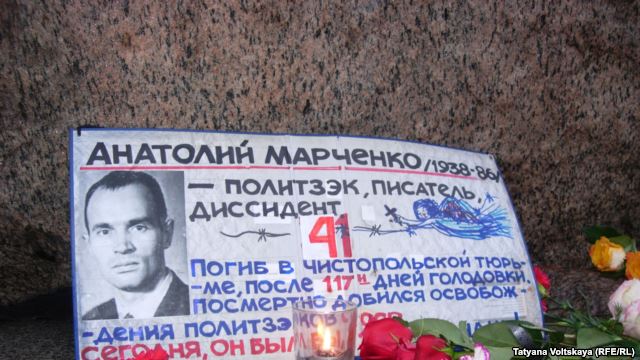 Marchenko’s death resonated widely amongst the dissident environment of the Soviet Union, and in the West. According to one version, this event and the reaction to it by western politicians urged [then president] Mikhail Gorbachev to begin the process of liberating political prisoners. A week after the death of Marchenko, Mikhail Gorbachev called Andrei Sakharov in Gorky [now renamed Nizhniy Novgorod], saying that the academician can return from exile from Moscow.

The famous Soviet dissident and human rights activist, former head of the Mejlis of the Crimean Tatar people, Mustafa Dzhemilev, considers that Marchenko’s hunger strike played a role in his own release in April of 1987:

– It was after the death of Marchenko that the release of political prisoners began. When I was tried in a closed court in Magadan in 1986, they quite unexpectedly gave me three years conditionally with a probation period. They cited the humanity of the Soviet court, [saying] that I have a child who’s a minor. It was weird, because where was this humanity in my previous six court processes? As though I did not have children then. The only person from the free public in the courtroom was my wife. And when I was released from detention, she threw herself on my neck and her first question was: “Do you know at what price you are freed?” I said, “I do not understand. What is the issue?” – “A few days ago Tolya Marchenko died. He demanded the release of all political prisoners.” My release was also to his merit. But a perfect person died. All of this is gotten at a hard cost.

Almost all of the Soviet dissidents who had the experience of being in [labor] camps went on hunger strikes. One of them, Ivan Kovalev believes that to resort to this method of combating lawlessness one should be very careful:

– It is an extreme measure prisoners resort to when there is nothing else to be done. But, if it is not a symbolic hunger strike, for example the Day of the Political Prisoner, for one day, but a hunger strike with some kind of a requirement, then the question arises: what is better – to declare a hunger strike and, eventually, to rescind it, or better yet to have not declared one? It seems to me, that to resort to such an extreme measure one should tread with caution, and it’s better by all means to avoid it. At least for strategic reasons. Because the price of such a pressure tactic on the administration drops sharply when people endlessly declare, and then rescind a hunger strike without achieving a result.

Soviet political prisoners, usually recalled a hunger strike if the prison administration promised to meet their demands. But in most cases, these promises are not fulfilled. Ivan Kovalev repeatedly went on hunger strike, as did his wife and member of the Moscow Helsinki Group, Tatiana Osipova. She fought to be allowed to see her husband. According to Kovalev, his wife demands were not met:

– She was starving for our right to see each other, although we were both prisoners. This was allowed by the laws then, but never carried out. And we were not the only family who was in prison at the same time and had, in principle, the right to see each other. Tanya received assurances that these requirements would be met when she lifted her hunger strike. It’s another matter that they were not met, but she had received assurances. 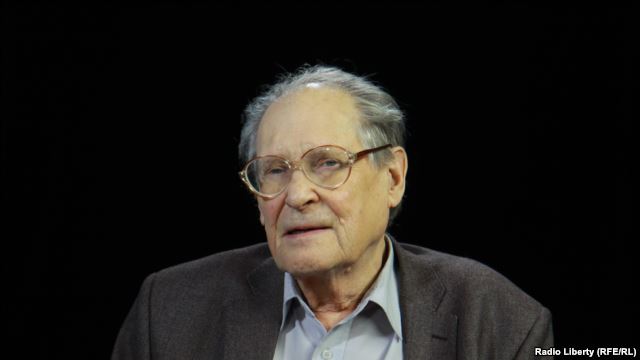 Ivan Kovalev’s father – dissident and human rights activist Sergei Kovalev – opposed Tatyana Osipova’s hunger strike; he considered it wasn’t the best way to fight back. However, in an interview with Radio Svoboda, Sergei Kovalev admits that while in detention, he repeatedly went on hunger strike, and it is possible that now, if he were in captivity, he would again begin to protest in this way. According to Kovalev, Nadiya Savchenko’s current hunger strike – is not an appeal to the Russian authorities but to society. As regards a possible exchange for the Ukrainian pilot, here, according to Kovalev, the result may not be  what Savchenko’s supporters are counting on:

– She is hunger striking against judicial tyranny. It is quite obvious. What will be the result of this hunger strike? This is not a question for her. This is a question, if you like, to us. This hunger strike may result in her raising her value as an object of exchange. And it worsens her position. They could demand more for her. Moreover, she is a member of PACE [Parliamentary Assembly of the Council of Europe]. Therefore, the question that may be the result of this rude Court and her numerous hunger strikes, is really a call to us. From my perspective, right now her hunger strike has only one meaning – with this action, she appeals to the conscience of the people. If they respond to the voice of conscience, then it makes sense. I repeat – this hunger strike is directed not to the Kremlin nor the officiating Russian police. She has turned to us.

Mustafa Dzhemiliev, who fought for many years for the return of his people to their homeland, also has experience of hunger strikes in the Soviet camps. During Nadiya Savchenko’s first prolonged hunger strike, Dzhemiliev turned to her with a fatherly request not to risk her health. The Soviet dissident knows like no one else the value of this form of protest:

– My own worst hunger strike was in 1974. It lasted 303 days with forced feeding through a tube. The idea was, of course, not pity or mercy from the Soviet regime. That was ruled out. I just wanted to draw the world’s attention to the arbitrariness, to the lawlessness created against human rights defenders and toward the Crimean Tatar people. And in this, one can say, I achieved my goal, though of course at a very heavy price. With regard to Nadiya Savchenko, she also has made great strides with her hunger strike. In regards to her, they create blatant lawlessness, she was kidnapped, and now they are imposing false accusations. I asked her to stop the hunger strike because she had already reached her target. The Russian state – is not a state where there is law and humanity. I wanted her to maintain her health and life, because she is still very young. But she refused. She told me: “You were on hunger strike for 303 days, and I’m only at 70-something.” I think this is not an argument. Still, she should not expose her life to danger, because we are going to save it by other methods. 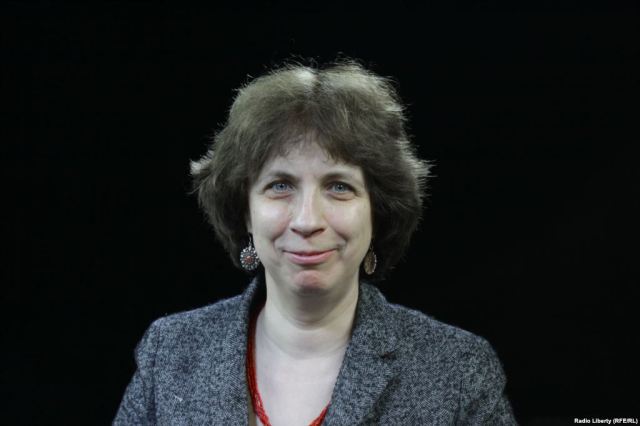 Human rights activist Zoya Svetova, as a member of the Public Supervisory Commission, visited Nadiya Savchenko in Moscow detention [SIZO] during her previous hunger strike. In the current situation, Svetova does not consider hunger striking to be the best way to fight for their rights:

– I visited her almost every week when she was on hunger strike last year, she lost a lot of weight then, 20 kilograms and was completely exhausted. There was a celebrated letter from the Russian intelligentsia in her defense, addressed to Vladimir Putin to release her, again for humanitarian reasons. But, as we know, Putin does not respond to such letters, and now it is unclear why Nadiya Savchenko is on hunger strike. Obviously, they will carry out a guilty verdict and her hunger strike will not change anything in this story. So, frankly, I believe that this hunger strike is absolutely meaningless. Then, her hunger strike gave her story a heroic flair, and Nadiya Savchenko became known to the whole world – indeed, a courageous woman who could not accept the fact that she, who is innocent, found herself in a Russian prison. But now there is a process, and it is necessary to finish it as soon as possible, whatever the verdict. And then her fate will further be decided not in courtrooms but, of course, on the political level. 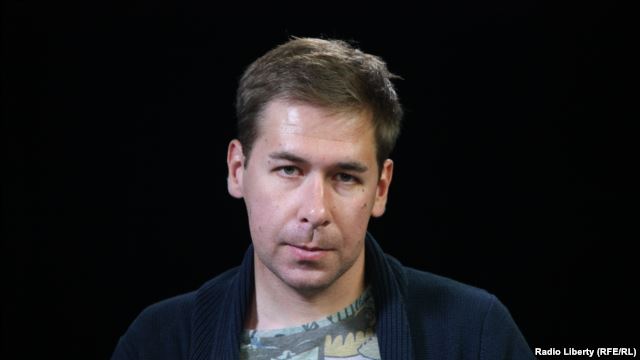 Ilya Novikov, one of Nadiya Savchenko’s [3] lawyers, together with his colleagues [Mark Feygin and Nikolai Polozov], understands the defendant’s decision to hunger strike, but recognizes that this circumstance complicates the work of the defense in this process.

– All words, nice and not so very, regarding whether there will be an exchange, we perceive only as words for the time being. We have no reason to take them as anything else within the historical context of another Ukrainian, Yuri Soloshenko, who was in a similar situation and who was also promised that he will be exchanged. As a result, he was deceived. We’re working on the assumption that we need to take this [legal process] to the end. We, unfortunately, are time-constrained with Nadiya’s decision to announce a hunger strike. Now every time we are thinking about whether to declare another petition, or whether to direct the next witness, we will have to constantly look at the state of Nadiya’s health and compare it to how much she can still withstand. Because we do not even have confidence in the fact that in the fourth week of a hunger strike she will be able to make it to court, that the prison doctors will even allow her to go, that the trial will even be held in her presence at all.

According to Ilya Novikov, Nadiya Savchenko’s sentence may be pronounced in February.