Posted on December 2, 2015 by Maria Stanislav

Dmitry Tymchuk, Head of the Center for Military and Political Research, Coordinator of the Information Resistance group, Member of Parliament (People’s Front)
11.30.2015
Translated and edited by Voices of Ukraine

Over the past weekend [November 28-29], militants fired multiple times on Verkhnotoretske from the direction of camouflaged positions north of Krasnyi Partyzan, using 82 mm mortars and stand-mounted grenade launchers. Krasnohorivka was also shelled from 82 mm mortars and small arms.

Ukrainian troop positions and civilian objects [targets] in the vicinity of Avdiivka (including its eastern outskirts and “Staraya Avdiivka“) were shelled from ZU-23-2 anti-aircraft guns and 120 mm mortars. At first, fire from small arms, machine guns, and two ZU-23-2 came from the direction of high ground at a height of 251.2 and the wholesale farmer’s market; then, fire from 120 mm mortars came from the direction of Kruta Balka. Also shelled were the ATO forces’ positions in the vicinity of Pisky, Opytne, and Mar’inka.

Militant activity continues in the northern and northwestern outskirts of Horlivka. The ATO forces’ positions are being shelled every day, from the direction of Holmivskyi and Zaitseve, as well as from militant positions north of Mayorskiy Avtorynok [automotive market]. The fire is mainly directed at [Ukrainian] positions in the vicinity of Dacha, Kodema, and Shumy, and at other areas adjacent to the Horlivka – Artemivsk motorway.

Militants of the so-called “Horlivka garrison” are actively discussing the order from the command of the “1st Army Corps of the DNR [Donetsk People’s Republic]” to transfer additional artillery and mortar units (including MLRS and self-propelled artillery units) to the Horlivka – Debaltseve line. Rumors are still circulating about a planned offensive by Russian-terrorist troops in early December 2015. In the eastern outskirt of Horlivka, militants are bringing up weapons and armor closer to the front. A terrorist armored group (three BMP-2 infantry fighting vehicles, two BMP-1, and three BTR-80 armored personnel carrier) was spotted on the move. 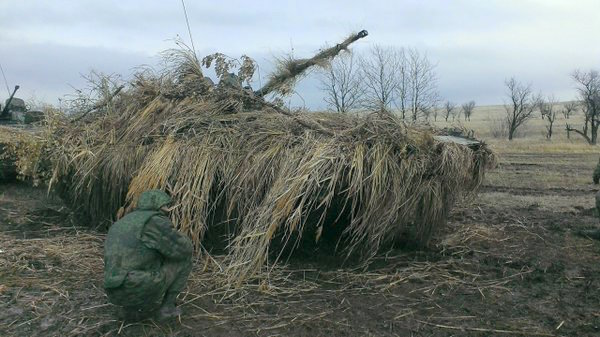 Militant activity was also observed in the coastal regions. In the area of Shyrokyne – Sakhanka, militant infantry groups were observed moving in several sections at once, and small arms fire (including from heavy machine guns) was recorded.

Active construction of fortifications and mine obstacles is observed in a number of sections of “DNR”-controlled territory along the demarcation line.

Armored vehicles were spotted on the move in the southern portion of the Donetsk ring highway [Kiltseva Doroha] – four BTR-80 and two BMP-2 moving in the direction of Zalisna Street (Proletarskyi district of Donetsk).

Militants continue transferring “personnel” to the vicinity of Irmino (at this time, it is unknown whether the purpose of the transfer is reinforcement or rotation). Militant units were observed arriving in Novooleksandrivka and Kalynove (in each case, a reinforced platoon to join the forces already concentrated in the area).

New militant units are being transferred through Shakhtarsk and Starobesheve, including for rotation of units deployed at positions between Olenivka and Dokuchajevsk, and further south up to Hranitne. During the past two days, we observed up to 25 truck runs in this direction, as well as the transfer of 11 units of combat equipment (armored combat vehicles); a “motorized rifle company” (with standard equipment and weaponry) was seen transferring to an area south of Dokuchajevsk from the direction of Styla.

In coastal regions, in the vicinity of Krasnoarmiiske (Novoazovsk district), militants are creating a solid fortified area in the second line of defense (the choice of location is feasible, considering the presence of a lateral road between Krasnoarmiiske and Bezymenne). Militant armored equipment was observed in the vicinity of Krasnoarmiiske, which militants are attempting to camouflage and entrench. 120 mm mortar camouflaged firing positions are located north of Oktyabr; ammunition is being transferred there (three Kamaz army trucks arrived during the past 24 hours). Located closer to Zaichenko are the camouflaged positions of a militant “motorized rifle company” (approximately 60 personnel, with two tanks, six armored combat vehicles (4 MT-LB and two BMP-2), and up to ten various trucks).