Dmitry Tymchuk, Head of the Center for Military and Political Research, Coordinator of the Information Resistance group, Member of Parliament (People’s Front)
11.12.2015
Translated and edited by Voices of Ukraine

During the past 24 hours, militants launched attacks against the ATO forces’ positions simultaneously at several points along the demarcation line, using small infantry units – mainly reinforced platoons (30-35 personnel). After being repelled by the Ukrainian troops, terrorists continued firing at ATO positions. Moreover, militants continue actively gathering intelligence on the ATO forces’ combat formations and carrying out sabotage and terrorist actions (attempting to lay mines on the approaches to Ukrainian troops’ strongholds and positions, on connecting pathways, as well as inside the “neutral zone”).

South of Popasna, between Novozvanivka and Troitskyi, three militant infantry groups attacked battlefield security outposts and an ATO forces’ stronghold. The attack was carried out frontally (after one of the groups had first moved covertly into the “neutral zone”) and from the flank. Support for the attackers was provided by a mortar battery (four 82 mm mortars) and at least three AGS-17 automatic grenade launchers.

Militants mounted similar actions near Shumy and Mayorsk. After intense shelling from 82 mm mortars and the on-board weaponry of BMP-2 infantry fighting vehicles, two groups of militants tried to attack the advanced positions of the ATO forces from the flanks. Concentrated fire from the defending Ukrainian troop units halted the enemy, forcing them to withdraw to their initial positions.

Militants have also been active south of Hranitne (near Mykolaivka, an attempt was made to take up positions in the “neutral zone” under cover of mortar fire); near Mar’inka (enemy infantry groups totaling 100-110 personnel were spotted moving from Oleksandrivka and the Trudivske mine towards the ATO forces’ positions in the vicinity of Krasnohorivka). In separate instances, the movements of enemy armored vehicles were observed (we noted two MT-LB multi-purpose light-armored transporters, including one with a ZU-23-2 anti-aircraft gun, and at least three BMP-2s). 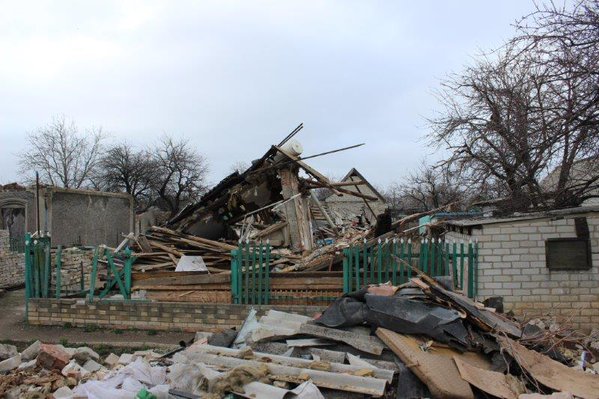 Mar’inka and Krasnohorivka are among the most heavily damaged settlements near Donetsk. Photo by ICRC_ua

South of Avdiivka, near the village of Opytne and further north, near the village of Novhorodske, several militant infantry groups tried to get close to the ATO forces’ positions (sometimes to within 150-200 meters) in order to open fire and mount attacks. Terrorists attempted to break into the gap between Avdiivka and Opytne, as well as to circle Dzerzhynsk from the south through Shumy and Novhorodske.

In addition, ATO forces’ positions are frequently coming under fire from militants, especially in the stretch between Mar’inka and the northern outskirts of Horlivka (including Krasnohorivka, Pisky, Donetsk International Airport (DAP), Opytne, Avdiivka, Novoselivka, Troitske, Novhorodske, Shumy and Mayorsk). Positions are also being subjected to weapons fire in the coastal regions (in the area between Hnutove and Sakhanka), as well as near Hranitne, Popasna, on the Krymske–Trokhizbenka stretch, near Shchastya, and between Stanytsia Luhanska and Syze.

The reinforcement of the militants’ “Horlivka garrison” continues. An armored vehicle group consisting of four BMP-2s and two BMP-1s has been transferred to the vicinity of Ozeryanivka (southwestern outskirt of Horlivka). According to the initial reports, a militant tank platoon has redeployed to the same area. An artillery group of brigade strength has been deployed east of Horlivka (nearer to the Luhansk-Donetsk motorway). Terrorists have been busy delivering ammunition to their positions from the Debaltseve area – up to 40 truck loads per 24 hours.

Servicemen of the Russian Federation Armed Forces are on duty at an outlying checkpoint in the Horlivka area. Members of the families of local militants have been seen leaving for Russia. Terrorist leaders have instructed the management of the PJSC [public joint stock company] “Concern Stirol” [chemical complex] to suspend production (temporarily).

Information is being circulated in local militant circles about preparing for a counter-offensive in the Artemivsk direction, in response to the supposed offensive by the Ukrainian Armed Forces allegedly scheduled for after 11/15/2015.

Six tanks and at least four BMP-2s have been spotted near Oleksandrivka (east of Mar’inka) in camouflaged positions.

One of the terrorist “reinforcement” groups which we reported earlier (observed south of Donetsk) has already been spotted in the area east of Yasne. The group comprises up to 100 militants, eight BMP-2s and MT-LBs and at least two anti-tank systems.

A militant-reinforced motorized infantry company with up to ten BMP-1 and BMP-2 infantry fighting vehicles, four BTR-80 armored personnel carriers and up to 10 motor vehicles is being transferred from the Proletarskyi district of Donetsk towards Makiivka.

Given the shortfall in financing from the Russian Federation, terrorist leaders in the Donetsk People’s Republic [DNR] have decided on a “temporary restriction” on the payment of one-time injury benefits to local residents and militants, on the pretext of “essential infrastructure rebuilding.” Local residents will now receive UAH 3,000 [USD 130] in the event of a serious injury, UAH 2,000 [USD 87] for light and medium injuries. Members of illegal armed gangs will receive UAH 5,000 [USD 217] and UAH 3,000 [USD 130], respectively (previously, compensation payments to civilians were UAH 5,000 [USD 217], and to members of illegal armed gangs, UAH 10,000 [USD 435]). 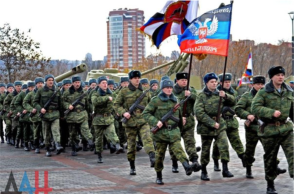 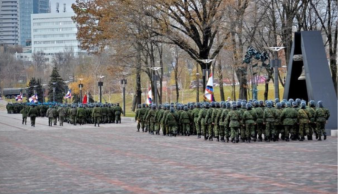