Dmitry Tymchuk, Head of the Center for Military and Political Research, Coordinator of the Information Resistance group, Member of Parliament (People’s Front)
07.03.2015
Translated and edited by Voices of Ukraine

In the past day there has been a marked decrease in the activity of the Russian-terrorist forces in Donbas. However, when shelling the positions of Ukrainian troops and civilian targets, insurgents are still using weapons “forbidden” in the Minsk agreements (cannon artillery, armored vehicles, 120 mm mortar).

In addition, Russian-terrorist forces’ formations are actively regrouping their forces and resources, including close to the demarcation line between [the two] sides. Also, the enemy is carrying out a reinforced reconnaissance in several areas, using a wide range of forces and means – from UAVs [unmanned aerial vehicles] to DRGs [sabotage and reconnaissance groups].

During the day in the area of Pisky and Doslidne, the terrorists led attacks from 120-mm mortars and 122-mm artillery. 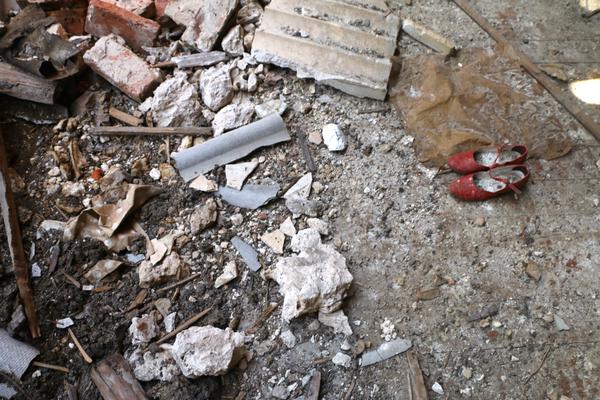 “There’s no place like home.” Photo from Pisky, Ukraine by Nolan Peterson. Source

The same weapons were used by insurgents in the coastal areas, where ATO forces and civilian objects were shelled in the vicinity of Berdyanske, Lebedynske, Pavlopil, and Hnutove. Terrorist artillery groups are carrying out fire strikes from positions located near Bezimenne and Krasnoarmiisk. In addition, a new terrorist group comprised of two batteries has been observed north of Novoazovsk (the area of Huselshchykove – Patriotychne).

In the vicinity of the Butivka mine, an armored terrorist group that operates in the area (two tanks, a BTR-80, and two BMP-2) repeatedly shelled the advance positions of the Ukrainian troops. The shelling was carried out by two tanks from camouflaged firing positions; the tanks operated under cover of 82- and 120-mm mortars. The terrorists attempted to prevent ATO forces–from opening fire from anti-tank weapons–with Zu-23-2 anti-aircraft guns and by firing from ACV weapons on the flanks.

Fire attacks were recorded on the positions of ATO forces in the vicinity of Novhorodske, Leninske, and Shumy. The fire strikes were carried out from AGS-17 automatic grenade launchers, 82-mm mortars, and anti-tank missile systems (in the first line along this stretch, the terrorists have received anti-tank missile detachments). 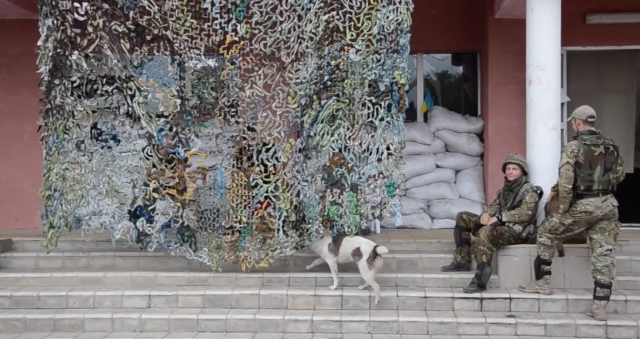 In the vicinity of Katerynivka and Zolote, hidden raids into the “neutral zone” by groups of insurgents were recorded; insurgents planned to shell the positions of Ukrainian troops from close range with large-caliber machine guns. The enemy group raids were carried out under cover of 82- and 120-mm mortars and AGS-17. These attempts were thwarted by the active directed fire of ATO forces’ units from small arms.

In the past 24 hours in the area of Sokolniki, Triokhizbenka, and Shchastya, terrorists shelled the positions of Ukrainian troops (mostly from small arms and AGS-17). Several attempts by enemy sabotage and reconnaissance groups to cross the Siversky Donets river were observed to conduct reconnaissance and acts of sabotage in the tactical rear of the ATO forces. After several armed confrontations and fire contacts, the detected insurgent sabotage and reconnaissance groups retreated to their starting line.

On the Novotoshkivka – Triokhizbenka stretch, and on the left flank (Stanytsia Luhanska – Shchastya), the terrorists’ active use of UAVs to explore the positions of Ukrainian troops was recorded. It was determined that UAVs in these areas are used by a special unit of the Russian Armed Forces deployed to Luhansk from among a group of Russian troops in Abkhazia. This division that operates along several sections of the “frontline” periodically updates and corrects information about the location of Ukrainian troops.

An artillery battery of the Russian Armed Forces (at least six D-30 122-mm howitzer with transport) was observed behind Dokuchajevsk. Increased measures to disguise [the artillery] have been observed. The transfer of this artillery unit was carried out by riding across a weapon or two at a time.

In Donetsk, terrorists have staged a park of combat vehicles in the former “Coca-Cola” warehouse area (south of Spartak). Four tanks, 10 ACVs (four BMP-1 and BMP-2, three BTR-70 and BTR-80, three MT-LB, one with a ZU-23-2), 14 vehicles. During the last 24 hours, two more tanks and a BRDM-2 arrived. Some of these armored vehicles operate on the first line at the front.

The transfer of an insurgent artillery group was observed through Alchevsk and Stakhanov towards Pervomaisk. The artillery group includes 122-mm D-30 (six units) and 152-mm “MSTA-B” (four units).

At a machine-building plant in Kirovsk, there is a concentration of military equipment and weapons (six tanks, of which at least two units are not combat-ready, three 2S9 “NONA,” four BMD-2, three BMP-2, two BMP-1, six BTR-80, two BTR-70, six MT-LB, two of them with MT-12 “Rapira”). Moreover, two Russian “Tiger” ACVs (one vehicle with a “Leer-2” electronic warfare station), five UAZ vehicles, and several civilian SUVs were observed on this “base.”

Konstantin Bernatovich, 33, on patrol at the frontline in Pisky, Ukraine. Photo by Nolan Peterson, The Daily Signal. Source