Dmitry Tymchuk, Head of the Center for Military and Political Research, Coordinator of the Information Resistance group, Member of Parliament (People’s Front)
03.11.2015
Translated and edited by Voices of Ukraine

Russian-terrorist forces in Donbas continue to grossly violate the terms of the Minsk agreements, launching fire strikes on the positions of Ukrainian troops and attempting an offensive in certain areas. The most tense situation is [currently] observed in the seaside (Mariupol) sector, near the settlement of Shyrokyne, where terrorists carried out offensive operations during the past 24 hours, using mortars and armored vehicles. Also, Russian-terrorist forces have been active near Avdiivka, Tonenke, Sokolnyky, Pisky, and a number of other settlements. 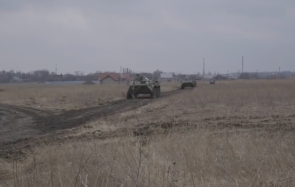 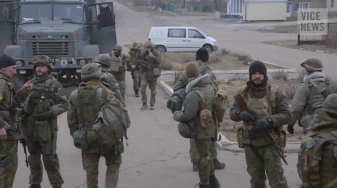 Ukrainian forces’ Azov Battalion in Lebedynske on the outskirts of Mariupol. Screenshots from ViceNews report.

A Russian-terrorist artillery group has been concentrating in the vicinity of Bezimenne (Mariupol sector), thus creating a powerful enemy artillery fist in the area. We have reports of 16 MLRS units, 28 cannon artillery weapons (at least 12 of them are self-propelled howitzers – 122-mm 2S1 Gvozdika [“Carnation”] and 152-mm 2S3 Akatsiya [“Acacia”]).

Several convoys of motor vehicles and armored vehicles passed southward through Debaltseve, in the direction of Snizhne and Krasnyi Luch. These convoys included 24 tanks, 35 ACvs, and about 25 motor vehicles.

The enemy has moved an armored group to the vicinity of Mayorsk. The group includes 6 tanks and 11 ACVs, supported by a battery of anti-tank artillery (six 100-mm MT-12 Rapira [“Rapier”] guns).

In Horlivka, local insurgents are vigorously spreading rumors that Ukrainian troops are actively preparing for an offensive (“to avenge Debaltseve”).

Due to a lack of shoring timber, mines and ‘dugout’ mines in the occupied territory of Donbas are being halted en masse. A quiet panic is growing among the representatives of terrorist organizations involved in the ‘coal business.’ ‘Hunting’ for shoring timber is gaining momentum in the occupied territories – we have reports of conflicts, sometimes with the use of weapons.

In the ‘DNR,’ a ‘higher education reform’ is underway; so far, it has placed the Donetsk National University [DonNU] under threat of extinction. Several departments of the DonNU are getting shut down for the simple reason of lack of funding. The closure of its international department has caused a particular outcry (by the way, its teaching staff were actively supporting the ‘DNR’ in the spring of 2014). Protest attempts by the teaching staff are thwarted by the ‘DNR’ insurgent threats to arrest those most dissatisfied, for “undermining the authority of the people’s government.”

In the ‘LNR,’ a special “information commission” has been formed. It is charged with monitoring airtime for Ukrainian television broadcasts throughout the occupied territory. The purpose behind the “commission” is complete removal of Ukrainian TV channels (including entertainment channels) from the broadcasting network in the “LNR” territory.

A ‘food riot’ is brewing in Makiivka. Local residents are voicing their extreme displeasure with the exorbitant food prices (e.g., 1 kg of herring costs 116-120 Ukrainian hryvnias [equivalent of 5 USD per 2 lbs]). Escalation of social tension is exacerbated by the fact that armed deserters from the ‘DNR’ militia are returning to Makiivka en masse. These are locals who have deserted the ‘DNR’ ranks because of a chronic non-payment of wages. 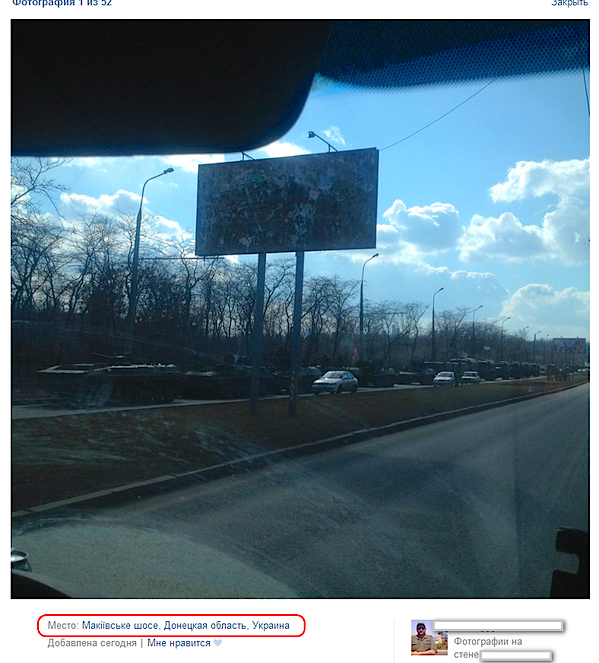 Large-scale marauding continues in Debaltseve after the withdrawal of Ukrainian troops. Insurgents as well as locals are actively looting and robbing the homes of their neighbors.

The ‘DNR’ leadership is currently holding a ‘cleansing’ of the Novoazovsk ‘city administration.’ The ‘DNR mayor’ of the city has been suspended from his duties on suspicions of embezzling “humanitarian aid” received from the Russian Federation. Several more representatives of the ‘city administration’ are also persons of interest in this ‘criminal case.’

Operational update on the Russian special services activities in Crimea:

According to the Information Resistance group’s operational data, the Russian Security Service [FSB] has been active in Crimea preparing a transfer of traitors from the Crimean agencies of the Security Service of Ukraine [SBU] (who joined the FSB of the Russian Federation in the spring of last year) to the occupied territory of Donbas (most of whom are signing a 3-year contract with the Russian special services).

Specifically, the former SBU turncoats were issued a “voluntary-compulsory” training in the Rostov oblast (of Russia). Following that, they would be sent to Donbas, in order to serve in the newly created “intelligence services” of the ‘DNR’ and ‘LNR.’

The FSB promise that these employees will continue to be employed by the FSB while they operate as part of the above terrorist organizations.

Assistant department head of the FSB on Crimea and Sevastopol Andrey Maksimenko is directly in charge of the “recruitment process” for the terrorist organizations.

As previously reported by the IR group, another traitor – former head of the SBU department in Sevastopol Pyotr Zima – is overseeing the creation of “security agencies of the DNR and the LNR.” By the way, according to IR group data, Andrey Maksimenko is a close friend of Zima.