Dmitry Tymchuk, Head of the Center for Military and Political Research, Coordinator of the Information Resistance group, Member of Parliament (People’s Front)
02.20.2015
Translated and edited by Voices of Ukraine

The situation in the ATO area remains tense; Russian-terrorist troops continue to actively shell Ukrainian troop positions. Russian-terrorist units are regrouping on the main lines of operations. Enemy units are being restaffed and supplied with additional armaments and military equipment in order to restore their combat capacity. This process is being supported by an increased supply of resources and materials. Over the last 24 hours, at least 4 supply convoys were spotted arriving from Russia to the occupied territories of Donbas (for a total of up to 55 vehicles and 28 pieces of combat equipment, including tanks, armored fighting vehicles, and self-propelled artillery units).

In the area of Debaltseve, during 02.19.2015, the enemy attempted to prevent the exit of disjointed and remaining groups of Ukrainian units from the Debaltseve force, by a “clean-up” operation of the city and its outskirts. Occasional firefights were reported on the Kalynivka – Lohvynove – Nyzhnje Lozove, in the direction of Luhanske [village in Donetsk oblast; not to be confused with the city of Luhansk] and Svitlodarsk. Insurgents and Russian military servicemen attempted to set up screening forces and fired sporadically on the main transport routes in this area.

Units of the Russian Armed Forces are present in the area of Debaltseve (to the south and east of the city). These units are very well equipped, armed, and geared (camouflaged as “Army of Novorossiya”). In particular, we have reports of three Russian battalion tactical groups (BTG), supported by two artillery groups (a total of 35 tanks, 68 CFVs, up to 50 pieces of cannon artillery, and 24 multiple rocket launcher systems). These BTGs took a direct part in the battles for Debaltseve, together with gangs from the “DNR” [Donetsk People’s Republic] and “LNR” [Luhansk People’s Republic]. Command structures that directed the “Debaltseve operation” (including the artillery direction center) are also manned by regular Russian officers. During the “operation,” local insurgent gangs, much more poorly armed and equipped, were deployed in front of regular Russian army units. (Currently, these gangs are holding positions in the city [of Debaltseve] and on the northern direction.)

The enemy’s main assault tactical groups are regrouping further into the occupied Donbas territory. Additionally, remnants of the tactical group from the terrorists’ “Horlivka garrison,” which took part in fighting for Vuhlehirsk, are being transferred from the area of Debaltseve towards Horlivka and Yenakijeve (11 tanks, 8 CFVs, one mortar battery, one anti-tank battery, 4 anti-tank guided missile launchers, and 4 MT-12 “Rapira” anti-tank guns). We also have reports that several “LNR” mobile groups (mainly the remnants of so-called “Cossack” formations and local insurgents) are moving towards Pervomaisk on motor vehicles (total of up to 250 personnel, several 120-mm mortars, and 4 tanks).

During the last twenty-four hours, Russian-terrorist artillery groups stationed near Donetsk fired on the positions of Ukrainian troops in Pisky, Marinka, Vodyane, and Opytne (three instances of MRLS fire, but mainly cannon artillery and mortars). Ukrainian troops opened retaliatory fire, in individual cases and only on surveyed and confirmed targets.

A fresh tactical group is being transferred to the area of Donetsk, through Snizhne and Shakhtarsk, on motor vehicles (up to 20 trucks and 3 minibuses). The convoy also includes four BMP-2 infantry combat vehicles, and two BTR-80 armored personnel carriers, used as march security. This tactical group is manned by local insurgents and Russian mercenaries who received training in Russia, in the training camps of Russian special services.

More of the insurgents’ equipment damaged around Debaltseve is being transferred to Snizhne, Donetsk, Yenakijeve, and Horlivka, for repairs.

A mixed group consisting of insurgents and Russian mercenaries arrived to the area of Bezimenne (near Novoazovsk) from the territory of Russia, up to an enforced company in strength (130 personnel, 4 tanks, 6 trucks, six D-30 guns, and a mortar batter). This group was accompanied by a reconnaissance group manned by military servicemen of the Main Intelligence Directorate of the General Staff of the Armed Forces of the Russian Federation (17 personnel, 3 jeeps, and a minibus). 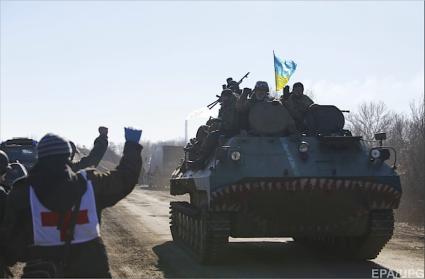 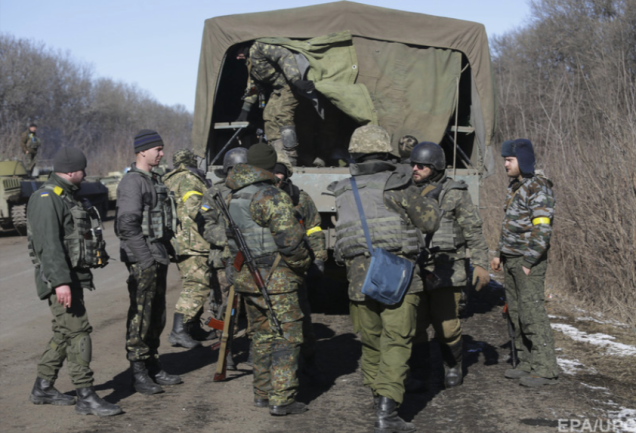