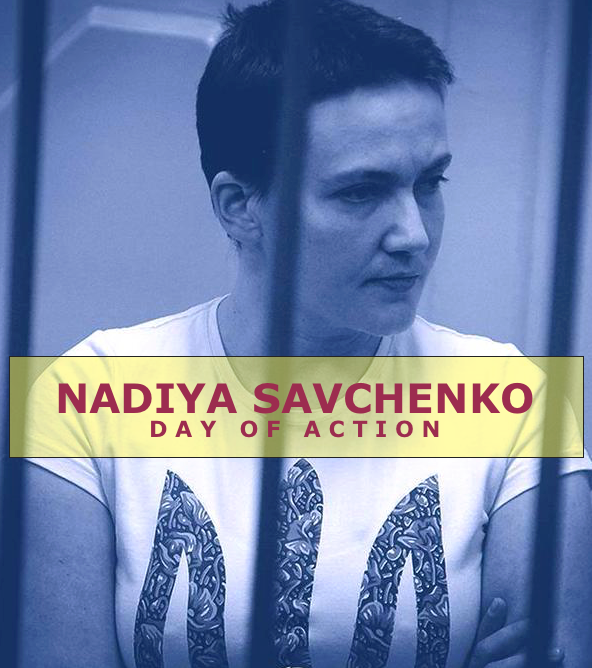 In the hopes of continuing to put pressure onto key people who may be able to influence the release of Ukrainian MP/pilot Nadiya Savchenko as she enters her 50th day of hunger strike tomorrow (Feb. 1st), we have teamed up with other individuals globally to form a few Nadiya Savchenko Action Days. The action requested and info needed will all be provided in one post. Today, please help to “write a letter” to a very key figure, the Chair of the Committee of Ministers of the Council of Europe (COE). The Committee of Ministers, with the Parliamentary Assembly, is the guardian of the Council’s fundamental values and monitors member compliance.
(It would be good to write to your own foreign affairs minister as well). The reason is explained in the sample example letter below. You can copy this one and use it as is, or as a template you modify. Please do so in the next 24 hours and send it by email to the addresses at the bottom (2). You can also tweet a jpg of it to the Chair if you know how to do that and prefer to use Twitter (account address at bottom). If you are French please write in French as the Chair speaks French. That’s it, it’s that simple and easy. But please stop, take 4 min and do it now! THANK YOU!

Mr. Didier Reynders, Chairperson of the Committee of Ministers of the Council of Europe (COE)

I ask that you consider a matter, whose inattention will have serious repercussions on public confidence in the Assembly’s willingness to stand for its principles.

The Parliamentary Assembly called on the Russian authorities to release Nadiya Savchenko within 24 hours and to ensure her return to Ukraine or hand her over to a third country (Resolution 2034). I urge the Committee of Ministers and you personally as its Chair to take action to ensure the release of Ms Savchenko, a Ukrainian fighter pilot who was captured on Ukrainian soil and subsequently incarcerated in a Russian prison and who has parliamentary immunity as a member of the Parliamentary Assembly. Mr. Pieter Omtzigt has twice tabled questions about the case of Ms Savchenko (8 October 2014, No. 665 to the Committee of Ministers, Doc.13625; and again on 29 January 2015, No. 678, Doc.13701).

What action has the Committee of Ministers taken in the last four months on the case of Ms Savchenko, and in particular vis-à-vis the Russian authorities, in order to pursue her release? What are the committee’s plans today to actively pursue her release?

Ms Savchenko has been on hunger strike for 48 days and her health is deteriorating rapidly.

In addition to the possible death of Ms. Savchenko, the consequences of inaction include serious damage to the reputation of the Parliamentary Assembly, placing in doubt its commitment to defend the rights it purports to uphold.

Sincerely and with great urgency,

Send copy to the Secretariat of the Committee of Ministers