By Zinoviy, Kyiv resident and 7 month veteran of Maidan protests
07.09.2014 Kyiv
Edited by Voices of Ukraine

About the shooting on Maidan on July 6-7th… 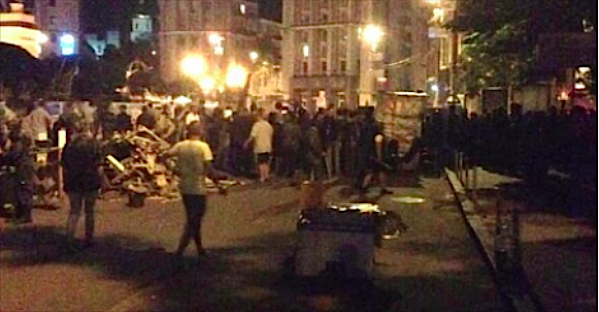 Evening of July 6 – At least 200 well-organized fighters from Maidan Self-Defense opposed a neo-Nazi group of around 30 people, and are real heroes for it.

I was nearby when the neo-Nazi group attacked the gay club and saw what they were doing until maybe a few minutes after the first shots were fired. I did not, however, see what weapons or ammunition were used.

The neo-Nazi group first attacked a gay club [“Pomada”] on Zankovetska Street, throwing rocks and explosives at the door. This is the second night in a row in which this group attacked this gay club in this matter. Apparently no one was hurt.

The neo-Nazi group then walked down Passage and Khreshchatyk streets, screaming slogans that they were the “SS.” Most had shaved heads and wore shorts, and during attacks had either their t-shirts pulled over their faces or wore light balaclavas. They waited in front of Bessarabskiy Rynok [Besarabsky Market] for about 10 minutes, then attempted to enter Maidan via Khreshchatyk St. near the intersection with Horodetsky, but drew the attention of the Maidan Self-Defense and were not permitted to enter.

The neo-Nazis retreated and went up Prorizna Street, in order to approach Maidan from another side. They appeared near Taras Schevchenka Lane not far from the Globus dome, but Maidan forces were ready and waiting for them. There was about a five minute discussion between the two sides, then a fight broke out with clubs. The Maidan forces won since they outnumbered the fascists, and they captured and moderately beat one of them. The rest of the neo-Nazis retreated up Schevchenka Lane and were chased by the Maidan Self-Defense.

Suddenly, there was a gunshot (according to reports from the Self-Defense, and matching what I saw next, the first shot was from the neo-Nazis) and the Maidan forces retreated to the Maidan. The neo-Nazis split into groups, many remaining on Schevchenka and the rest sprinted towards Maidan. There were many civilian onlookers caught in the middle but they were spared. A large physical fight broke out on Schevchenka. The neo-Nazis were now shirtless and running quickly towards Maidan. Large Nazi tattoos could be seen, swastikas, one fascist with a massive Nazi eagle tattooed across his back. Gunshots could be heard from near the Christmas tree, which were said to have been fired by the fascists.

Maidan and the fascists quickly regrouped. About 200 Maidan forces gathered in formation between the Christmas tree and the stage, in full battle gear, camouflage, protective equipment, shields, guns. The orders were given for the first row to carry shields and the second guns. The professionalism and discipline was impressive, and it was clear that these are veteran fighters. I saw two Maidan forces members with automatic rifles. A few more have pistols but of course most are unarmed except for sticks. The Maidan forces split into groups of maybe 50 and go in various directions, but mostly back towards Schevchenka.

The conflict has now escalated into a gunfight. Shots are heard from the direction of the Globus dome. I see an ambulance near the post office which later leaves, I assume with a victim. All entrances to Maidan are blockaded (if they weren’t already) including Metro exits. The latter, I assume is for the protection of the public so they don’t enter the war-zone. Shots continue, now more often, perhaps over 100 in total. After about 45 minutes or so it is quiet again.

July 7 – Tuesday I see drills on Maidan during the day. At 11pm Maidan went on total lockdown. The barricades were built up, barbed wire laid down and Molotov cocktails and rifles readied. Soon after, Maidan forces–over 100–rallied in front of the stage in full battle gear. Orders were issued over the stage sound system (very loud) to split up into groups and hold each barricade. Suddenly loud yells could be heard near the 2nd barricade facing European Square. Most of the Self-Defense members start sprinting in that direction, and the stage floodlights are kicked on. Germany scored a goal in the World Cup, and people were cheering from a bar. Fortunately there was no attack.

However I heard reports of two police buses sitting on top of Institutska Street at night according to a reliable source on Maidan. Also the day before (accruing to news and people on Maidan), a cleanup crew came to Institutska St. to clear out the sacred barricades there, but were not allowed to clean it up.

There were more drunks and homeless on Maidan in January than there are now. They just seemed less visible because the general population of Kyiv came to Maidan during the day, during the protests. Now what remains on Maidan are people on rotation to fight in the east, or people who maintain and guard each tent and kitchen, usually because they have no job to return to, or are retired. There are at least 200 trained fighters on Maidan every night, almost all of whom have been to the east or are considering going soon. Other well-trained people are returning from the east tomorrow. Most of the people on Maidan now were there during the revolution. Others are refugees from Russia, Crimea and the east. Maidan kicked out most of the worst people, the most corrupt and those who did nothing, long ago in a number of evictions. Of course some remain, these are the ones who are sociable or work the system and politics well.

Maidan has long been more like an army than a protest. During the winter some Self-Defense [members] would even use guns against the police, then told journalists they are peaceful protestors that are armed with only sticks.

Maidaners claim they are being offered 250,000 hryvnia [approx. 21,000 USD] per tent to leave. Some tell of stabbings by outsiders, poisonings, even kidnappings and murders.

There was a large tire fire near the former concrete block wall on Khreshchatyk St. two weeks ago, and two nearby tents were burned down. The back of a police water canon vehicle was burnt off. This was in the area of the street which now is completely cleared.

In last week’s armed attack near the Verkhovna Rada offices [Ukrainian Parliament] at 4pm on Tuesday, it’s well known the attackers were the former 17th Sotnya. That used to be (don’t know if it still is) [Andriy] Parubiy’s sotnya. I have seen this group guarding the Verkhovna Rada. Maidan claims the police gave the attackers two bags of riot grenades. The attack happened after Maidan protesters, along with foreign currency debtors supporting bank legislation, blockaded the Rada all day.

About the neo-Nazi group: the best reports I can get from Maidan and the media are that they are members of the Interior Ministry’s Azov Battalion. As is already known, Azov is composed of many fascists, and is even recruiting fascists (even ex-murderers) from Russia according to numerous press reports. Azov Battalion is linked to the “Social-National Assembly,” the neo-Nazi group that claims they’re not neo-Nazis, whom we see very often on Maidan.

Both the Azov Battalion and the Interior Ministry appear to be giving inaccurate reports of what happened the night of the shooting. Igor Mosiychuk of the Azov Battalion claims that drunken members of the Self-Defense attacked the Azov Battalion. The Adviser to the Minister of Internal Affairs of Ukraine, Anton Gerashchenko, says the fight started because a group broke Maidan rules by having their faces covered.

ZIK TV–Night shooting on Maidan: either strife or an attempt to disperse Maidan.

People who continue to protest on Independence Square [Maidan Nezalezhnosti] in Kiev, consider the night shooting [on July 6-7] a provocation. Some of them are even convinced that it was an attempt to disperse Maidan.

Let’s recall that on the night of July 7th, on Maidan, a shooting occurred as a result of which, according to the Ministry of Internal Affairs in Kyiv, four people were injured from traumatic weapons.

Mr. Vadim, who has protested on Maidan since December 5, told ZIK TV reporter Maxim Osovska that about close to 1:45am he heard a pistol shot. He believes that the shooting was arranged by representatives of the organizations “White Hammer” and “Narnia.” “As I was told, they were trying to beat up the [people from the] Caucasus. They began to scream and Maidan Self-Defense ran in. The guys from the Caucasus wanted to fight back but the attackers responded with shots,”–said Vadim. According to him, the night incident does not look like one that could have been organized by the authorities to liquidate the tent camp in the center of Kyiv.

“Maydanivets” [Maidaner] Denis Lyulka, who called himself “a representative of the 4th Sotnya,” explained that at night, from the direction of St. Michael’s Square, about 30 armed men arrived who attacked the people of the third barricade. “This is a provocation, which aims to divide the square. The government is doing this in order to remove it [Maidan tent city],”–he said. According to Denis Lyulka, “The square is still needed due to the war in the East and to control the lustration process.”

One of the Maidaners, Vyacheslav, speaking to a ZIK reporter, doubts that the shooting at night could be “clearly a provocation for the purpose of stripping the square.” “Maybe it’s the authorities, but maybe someone hurt someone” –Mr Vyacheslav said.

Source: ZIK.com.ua (with the video in Ukrainian)