VOICES OF THE REVOLUTION: 40 days after Ustym’s death or 400 km both ways 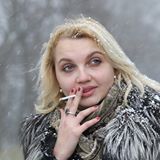 By Olena Stadnik
04.07.2014
Translated by Olya Lutska and edited by Voices of Ukraine
Source

If you can, please read this to the end…

In those days we lived at the Kyiv city state administration building. Do you know what I had for breakfast there? I ate loaves for breakfast – the wedding loaves – those decorated with flowers and wreaths. These loaves were left over after the funerals of boys who would never make it to their own weddings.

Those days seemed so long. The men’s room was turned into the smoking room. Sometimes we laughed there. Someone always told a joke. We smoked and laughed. Then invariably someone with a serious face would come in and say: “How can you laugh? People were killed there.” Everyone would stop laughing. This man with a stern look would calmly finish his cigarette and go away, and the smoking room would be filled with silence for a long time after he left. Mostly, people who stayed in this silence were those who had known some of the victims, all those who were crying in their sleep.

Sometimes, someone would come into the smoking room through the clouds of smoke; they would sit down on the windowsill and say: “You don’t get it, everything is for nothing. All of them died in vain!” Everyone would immediately start comforting him. They consoled him in many different ways. Then, the man with the cigarette would calm down and say: “You’re right. We will have a chance to fight.” Five minutes of weakness were followed by determination, and then he would leave. Around the same time when the door would close behind him, one of those who were consoling him, would say thoughtfully, “Guys, he’s right! All for nothing!” And then we would start to comfort the person who had just stopped to reassure the previous person. Sooner or later, it would be your turn. You would take a seat on the windowsill, stare at a spot on the wall … and people would start to console you.

Sometimes we went to a café. If we saw an old friend on the street, we cheered, “[You are] aliiiive!” One day, someone brought cigars – we treated each other as well as we could. And a farewell procession for Ustym was scheduled for 2:00 pm on February 21, 2014. As far as I remember, I didn’t even see him then [during procession]. I only saw him later – in Zbarazh – during the church service. I could not stop thinking that it was not him. He was laid out, so distant and calm. We were asked not to kiss him on the head because the bullet had gone through it. This Ustym looked nothing like the boy I knew, whom I was friends with a 17-year-old girl from our tent, the boy who used to tickle and tease her, he would lift her up, run after her, always laughing. Once, I saw them play – I smiled to myself because they were playing like children in a sandbox. Playing like fluffy, shaggy puppies do outside. I think that happened during the events on Hrushevskiy Street.

On February, 21, my voice got hoarse, but I continued to shout. All of us were hoarse at that time. As his coffin made its way through Khreshchatyk [main street in downtown Kyiv],  “Glory!” spread in waves behind it.

That was the first day I wore the uniform. It was very cold and humid outside. Snow was lying in the streets of Ternopil oblast [region]. The wet snow. It was also quite windy. We left for Zbarazh late at night. We were four people in our car. The other 20 people were traveling by bus. Our car managed to catch up to the bus carrying Ustym’s body. We arrived at Zbarazh even sooner than that bus. Many locals came to the checkpoint – they were shouting “Glory!” The whole city was lit up – candles were burning by every house, women and children were crying. Then we drove up to the house. This is where I heard how a mother whose son had been killed, cried. I didn’t want to be there anymore, but I had to be.

I saw his mother again in a couple of hours. She was resignedly calm. You know, it’s impossible to describe her face color. It was ashen. Lips, eyes, skin, hair. Everything was [of] the same color. Or rather, no color at all. Not a single color. His mother was very silent. Very. Understanding everything, she kept silent.

I wanted to scream, but everyone kept silent. I wanted to howl, but the house was so quiet. What could I do? Fall at her feet? Ask her for forgiveness? How could I explain to her why Ustym got killed, and not me? Because I didn’t have the courage to be at the frontline that day? Or because I slept that morning? How could I justify myself? How could I possibly explain it? No way to do that. That’s why you just stand still and keep silent. Very silent.

And yet… There is something perverse in strange thoughts. You can’t stop wondering about different things – for example, you imagine your mother, when on a stormy night someone brings her the body of her murdered 25-year-old daughter. You think, would she cry? And then you think, “since I lived longer, it would be better if I had been killed.” And that my mom still has another daughter – it should have been me. And my mother is strong, it should have been me. And everything would be somewhat easier. People believe in those who died, “the funeral service is held and they are indulged by paradise.” And I still don’t understand anything. Absolutely nothing is clear to me.

November 30 was easier. Those who got beaten were on our side. Those who were beating them up were on the other side. Decisions were made considering the circumstances. Now, you do not know where to run, or what to do. You know, it feels so good to assemble and disassemble a machine gun. I do it quietly and slowly, in such moments you don’t think about anything. Just disassemble and assemble. It calms [you] down.

We went to Zbarazh for the second time for nine days. I saw his mom again. Bloodless, lifeless, understanding everything and having lost everything. I tried to explain to her, to say thank you. Ustym saved me, Ustym saved my 18-year-old sister, Ustym saved my mother. Ustym saved all the girls, all the children. I do not know, I do not know… But I think that everyone who saw a mother whose son was killed, will never be able to shoot at anyone.

We went to Zbarazh for the third time for 40 days, it was last weekend. Ustym’s mom was so beautiful – her face, colorless. With such a look [in her eyes]… And you know what … I would like to say that I’ve never seen such a look, but it’s not true. I saw it later. I saw it, because we stopped at the village Travneve (Zbarazh district, Ternopil oblast) on our way back. A 17-year-old Nazar, who also was killed on Maidan, lived there. And I saw his mother there. His mother’s face was ashen, all features were smoothed out by the sadness and the look in her eyes, it was that look … And she was silent as well. Very silent.

The grave in Travneve looks beautiful. Yellow and blue flag, as well as red and black flag are waving above it. Just behind it, a field extends farther away, with the sky right above it… Beautiful. Ustym has a beautiful grave as well – he is buried next to Ukrainian Sich Riflemen. For some reason, this thought has a calming effect on me.

I hugged the mom, and we left. Left her, and Ustym, and Nazar there. We got into the bus and drove away. It was quiet in the bus. And then, someone started singing, “There, by the castle in Lviv, There, by the castle in Lviv, stood an old oak, And under that oak lay a partisan.” We were not singing together. All of us were screaming together. I had something aching in my chest for four months, and now this something had finally burst out. We were screaming, screaming and screaming. And we felt better because of this.

Actually, I thought that a 40-million-people nation would set up pilgrimage routes to the graves of our soldiers. That people from all the towns would come there, God forgive me, to worship the crosses and to kiss the hands of the mother. Well … maybe it will still come to this. And everyone will choose the direction for themselves and go for it: 400 km [249 miles] both ways. In the end, I personally saw how a grandmother brought her granddaughter to a photo of Ustym on Maidan and said: “Look – this is a hero. He died for you.” I burst into tears then. As a child, they would take me to the Eternal Flame [under ‘Ukraine’] and to the Tomb of the Unknown Soldier, in the same manner.

By the way, it’s my mom’s birthday today. And today, I am absolutely confident – sooner or later the revolution will win. It will win, because we have nothing to be afraid of anymore, nothing except for this strange, calm silence of the Mother.

3 Responses to VOICES OF THE REVOLUTION: 40 days after Ustym’s death or 400 km both ways