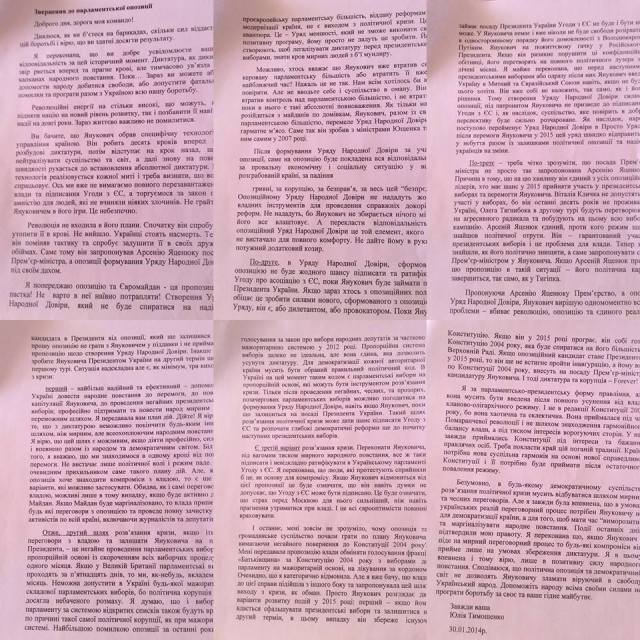 Appeal to the Parliamentary Opposition

I watch you fight on barricades, and how much strength you give to this struggle, I believe that you are capable of achieving the needed results.

I am sure you are well aware of your responsibility in this historic moment. The dictatorship is like a wild animal pushing forward, thirsting for blood, but temporarily trapped in a trap of civil rebellion. Until… Now, you can either help your people win their freedom, or make fatal mistakes and lose our struggle together with Ukraine.

Revolutionary energy is amped up so high, that it can either elevate our nation to the next level of its development, or rob Ukraine of hope for many years. It’s crucial now to not make mistakes.

As you are aware, Yanukovych chose a specific technology of governing the country. He takes ten steps forward in building the dictatorship, and then takes a step back to neutralize the society and the world, and then he moves at full speed again to establish the absolute dictatorship. This technology is implemented every moment and I must admit that it works. Here, we do not demand the full restart of the government and signing the EU Association Agreement, but bargain instead over the law on amnesty for people who have not committed any crimes. Do not play with Yanukovych’s game with him. It is dangerous.

The revolution was not on his plan. At first, he tried to drown it in blood. It did not work out. Ukrainians will stand to their death. Yanukovych has now changed his tactics and tries to strangle Ukraine in his friendly embrace. That is why he offered Arseniy Yatsenyuk the position of Prime Minister, and the opposition – the formation of a Government of the People’s Trust under one roof.

I am warning the opposition and Euromaidan – his proposal is a trap! It is not worth getting into it naively. The establishment of a Government of the People’s Trust which is not based on a solid pro-European parliamentary majority dedicated to reforms in the country’s modernization, is not a way out of the political crisis. It is a gamble. This is a minority Government that cannot fulfill its positive program. It will be prevented from doing so. It will be created to legalize the dictatorship before the presidential elections, and to wash off the blood of peaceful people from its uniforms.

Some probably think that Yanukovych has already lost his parliamentary majority or will lose it in the near future. Unfortunately, this is not true. We all would like to believe the opposite. But do not lead yourselves and the country astray. He did not lose control over the parliamentary majority, and will not lose it as long as he has absolute authority to do so. As soon as the people leave Maidan and go home, Yanukovych and his parliamentary majority will grind the Government of the People’s Trust like cannon meat. He did the exact same thing to Yushchenko’s ministers and Yushchenko himself in 2007.

Secondly, the Government of the People’s Trust formed by the opposition will not have a chance to sign and ratify the EU Association Agreement while Yanukovych is President of Ukraine. If a politician from the opposition promises to do so when the new oppositional Government is in power, then this politician is either a cheerleader or a procovateur. As long as Yanukovych is in power, there is no EU Association Agreement, nor will there be one. Yanukovych is bound by (and will never be free from) his one-way agreement with Volodymyr Putin. If he takes a risk and violates these confidential promises, he will become a full political loser within months. I am quite confident that before the next presidential elections, or immediately after it, Yanukovych will introduce the Customs and Eurasian Union even if he is unwilling to do so. He and his decisions no longer belong to him. Therefore, the formation of the Government of the People’s Trust by the opposition will not result in the signed EU Agreement, and consequently, the society that believes in Ukraine’s prospects will be badly disillusioned. As a result, the people will gradually rename the Government of the People’s Trust into the Government. And after Yanukovych’s victory during 2015, this government will soon disappear into an abyss with the remnants of political opposition and Ukrainian hopes for change.

Thirdly, it is necessary to understand the intent behind the offer of Prime Minister’s position to Arseniy Yatsenyuk. Yatsenyuk is currently the only person among oppositional leaders who has a chance to win over Yanukovych during presidential elections in 2015. Vitali Klitschko will not be allowed to participate in the elections, since he has not lived in Ukraine for the past ten years. Oleh Tyagnybok will be turned into an aggressive radical during the second round of the elections; in fact the electoral campaign will be built on this supposition. Arseniy Yatsenyuk is the only candidate the current regime has nothing on. He is the guaranteed participant in presidential elections, which is problematic for the current government. Now they have found a way to destroy his political career, by becoming a Prime Minister under Yanukovych. If Arseniy Yatsenyuk accepts the position under the current situation, his political career is over, just like it happened to Tihipko [NOTE: Serhiy Tihipko, a former presidential candidate, former Vice Prime Minister in 2010-2012, currently a Deputy Chairman of the Party of Regions].

By offering a Prime Minister position to Arseniy Yatsenyuk, and the Government of the People’s Trust to the opposition, Yanukovych simultaneously solves all the problems – he kills the revolution, opposition, as well as the only viable remaining presidential candidate from the opposition. That is why I ask the opposition to stop playing games with Yanukovych and refuse his offer about the creation of the Government of Civil Trust. Otherwise, you will make Yanukovych the second-term President in the first round of elections. The situation is extremely difficult, but there are at least three scenarios to end the crisis:

First – the most reliable and effective plan will help Ukraine to bring the national rebellion to victory, to full capitulation of Yanukovych, to immediate presidential elections; to professionally support and guide the people in a peaceful, victorious way. I gave you my plan of action. Act! I believe it is not possible to end the dictatorship in any other way but peaceful and comprehensive civil rebellion. I believe this approach will work if we act in a professional, strong and confident manner along with our people and the democratic world. Moreover, I think that we are a step away from complete victory. What is missing is political decisiveness, and the regime will crumble. Obviously, I support this very scenario. However, if the opposition is willing to compromise with the current government, there are other scenarios worth considering. Both scenarios, just like negotiations with the government, are only possible if Maidan stays active. If Maidan is marginalized, the government will stop all negotiations with the opposition and eradicate activists across the country, including journalists and MPs.

Thus, a second scenario to resolve the crisis is to negotiate with the government and leave Yanukovych as the president, as well as holding immediate Parliamentary elections by proportional representation with reduction of all electoral procedures to one month. If Great Britain is able to hold parliamentary elections in 15 days, we must be able to shorten ours to a month.

We must not allow any sort of parliamentary elections by majority composition, since political corruption in Ukraine has become unprecedented. In my opinion, parliamentary elections by open list system would also be damaging because of the same political corruption as under majority elections. The biggest mistake of the opposition in recent years has been voting for the election laws by partial majority system in 2012. The proportional electoral system is not perfect, but it is the only system that will remove the dictatorship. The correct political code must be selected for democratization of every authoritarian country. Presently in Ukraine, this code is represented by proportional parliamentary elections that could be an instrument to resolve the crisis. Only after immediate, honest and transparent snap elections could there be consent on the formation of a Government of National Trust, even if Yanukovych remains in power as President of Ukraine. This avenue for the resolution of the political crisis will allow a chance to sign the EU Agreement and to start considerable democratic reforms even before the next presidential elections.

The third scenario to resolve the crisis will be to convince Yanukovych, under the pressure of peaceful civil rebellion, to sign and immediately ratify the EU Agreement in the Ukrainian Parliament. I am convinced that protesters would treat this as a basis for compromise. If Yanukovych refuses to follow this scenario, then it follows that he does not even consider that the EU Association Agreement can be signed. This would mean that he is afraid of Moscow more than he wants to stay in power. And proponents of European integration must take this into account.

Lastly, I do not completely understand why the opposition and Ukrainian people started following Yanukovych’s plan by demanding a return to the Constitution of 2004.

I was told of the government’s proposal to exchange the votes for majority parliamentary elections by Batkivshchyna faction in accordance with the Constitution of 2004, for my medical treatment abroad. Obviously, I refused. But I already realize that the government has approached this situation from another side, and offered this solution to the crisis as a lie. Therefore, Yanukovych has two scenarios for 2015: first – if he succeeds in the falsification of presidential elections and remains president for the second term, he will keep the existing Constitution. If he loses in the elections of 2015, he is preparing the Constitution of 2014 that will support his majority in Verkhovna Rada. If an oppositional candidate becomes the President in 2015, he will be barely inaugurated when Yanukovych is on the candidate list for Prime Minister position under the Constitution of 2004. And then dictatorship and corruption will be in Ukraine – forever!

I am for a parliamentary-presidential form of government, but it must be instituted after the full removal of the oligarchic clan regime from power. And to do so, we must stay away from the Constitution of 2004, since it is chaotic and eclectic. It got adopted during the Orange Revolution under pressure from interests of competing countries, and not through an elegant solution to the balance of power. Our Constitutions have also been adopted with the interests and wishes of those in power. We must put an end to this unacceptable tradition. Our country needs new societal harmony that is based on a new just constitution, which must be adopted after the existing regime has been finally overthrown.

Obviously, political crisis in any democratic society must be solved through peaceful and fair negotiations. However, I always knew that in Ukraine, Yanukovych needed the negotiations not to make the country democratic, but to marginalize civil rebellion. Recent events have confirmed I was right. I am sure that if Yanukovych started peaceful negotiations, he would compromise only if dictatorship stayed. I am absolutely confident in this and therefore only believe in the positive impact of civil rebellion. I hope that the political opposition and the democratic world will not let Yanukovych break the Ukrainian people who believe in freedom. Help our people with all your power to not lose their struggle for their, and your, respectable future.