Petr i Mazepa: About contrasts, or what they forget about in Toretsk

By Yury Yezhov
07.07.2016
Translated and edited by Voices of Ukraine

On July 5th, the cities of Slovyansk and Kramatorsk celebrated the second anniversary of their liberation from terrorists. It was not a holiday in the usual sense, since the war was still ongoing and it was too early to celebrate…

“About contrasts, or what they forget about in Toretsk”

On July 5 Slovyansk and Kramatorsk celebrated the second anniversary of their liberation from terrorists. It was not a holiday in the usual sense, since the war was still ongoing and it was too early to celebrate. But it was yet another opportunity to recall the events of that time. To thank those who helped make that first, very important step. And to remember those who gave their lives for the liberation of Ukrainian Donbas.

There was a military parade in Slovyansk. Not a pompous Soviet-style one, but quiet, and reasonably solemn.

The president of Ukraine personally handed out awards and spoke with the participants of the events of the now distant summer of 2014: the paratroopers and the commandos, the policemen and the national guardsmen; the best of the best. For many of them Slovyansk was only the beginning.

It was symbolic that under this reliable shield, local residents who wanted to thank their defenders assembled. A small thing which really hit home for me was – when most people tried to get to the [President] (some – to shake his hand, some – to take a selfie), one elderly, grey-haired man went up to the soldiers with a bunch of simple flowers and the words “Lads, I’d rather go with you. You deserve it more!” And the soldiers smiled shyly while opening up their “Hummers” [sic] and “Spartans,” IFVs [infantry fighting vehicles] for the local kids to play on.

There was also a parade of orchestras, a requiem gathering at the 5th checkpoint, a photo exhibition, performances of the creative groups of the city and other events.

At the same time, in Kramatorsk there were charity football matches between the musical stars, the soldiers and local police teams, in honour of the musician Larson [Ukrainian musician, rapper, a volunteer and former soldier of the ATO Sergey Larkin (Larson) who died in hospital after a motorcycle crash, Ed.]. 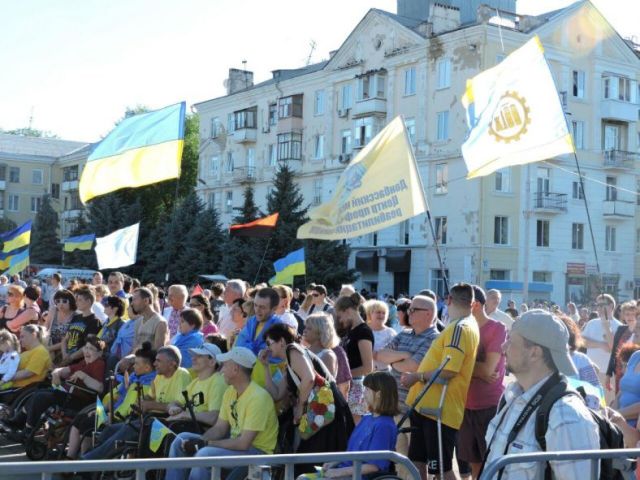 There was a patriotic march of the residents of Kramatorsk and a music concert with Jamala as the main star.

The square was flooded with cheerful people, many of them with children. Crimean Tatar flags could be seen organically alongside the red-and-black and the blue-and-yellow flags. There was no nationalism or aggression – only smiles, good humour and cool music. Without division by ethnicity, language, faith or political beliefs – exactly as it should be in a large but close-knit family of free people.

Against this positive background, the incomprehensible act of the inhabitants of Toretsk comes into particularly sharp contrast. Some drunken people (many of whom also had prior convictions, as it later turned out) tried to block a military convoy of the Ukrainian Armed Forces. The year is 2016, and there was more than enough bitter experience among the soldiers not to stand on ceremony this time; fortunately, the police helped out. According to Abroskin, the Head of the Donetsk Oblast police, the mayor of Toretsk stood on the sidelines and observed the situation with detachment.

The last time this happened was back in 2014. And it seems that everyone should have understood by now what such actions lead to. And the end result is very simple – a war in your city, which was confirmed later on. On the evening of the 5th, shells began to land on the settlement of Severny, basically a suburb of Toretsk. Fortunately, this time only the fences and windows were damaged as a result of the attack, and no residents were hurt. But the lesson was a good one: if you oppose the military, you get unwelcome presents from the separatists. Everything is logical. If you sow a storm, you’ll reap a war.

And that same war now continues only a hundred kilometres away from the festive Slovyansk and Kramatorsk. Here in Avdiivka, people are forced to endure all the horrors of a war right on their doorstep. The children have gotten accustomed to playing in sandboxes to the sounds of mortar salvos, teenagers go for walks in the evenings. Someone left because they couldn’t stand this any more, someone else was forced to leave because their home was destroyed.

Guests and residents of Kyiv like to go on the quite popular tours to Chernobyl. Connoisseurs of the “Stalker” experience pay good money to visit and look at an abandoned ghost town. But recently many complain that the props are unnatural. They say that the travel agencies deliberately put some things there to attract more clients.

In Avdiivka, everything is completely authentic. There are no fakes. That’s a 100% guarantee. It is a paradise for “Stalkers.” 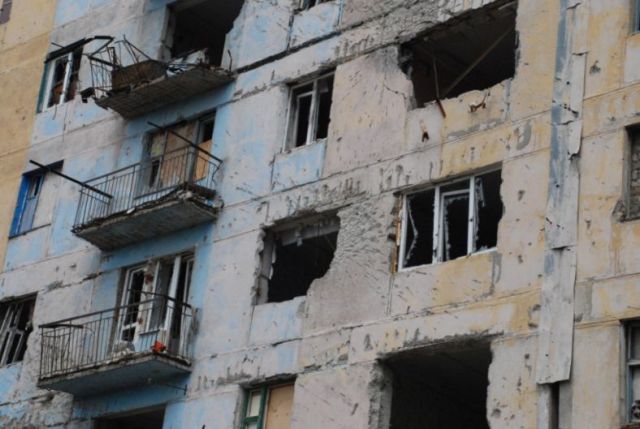 But no photographs can convey that feeling you get when you enter an abandoned, destroyed apartment. Here, you can see exactly what war is like. When people leave behind absolutely everything that they have worked so long to get. 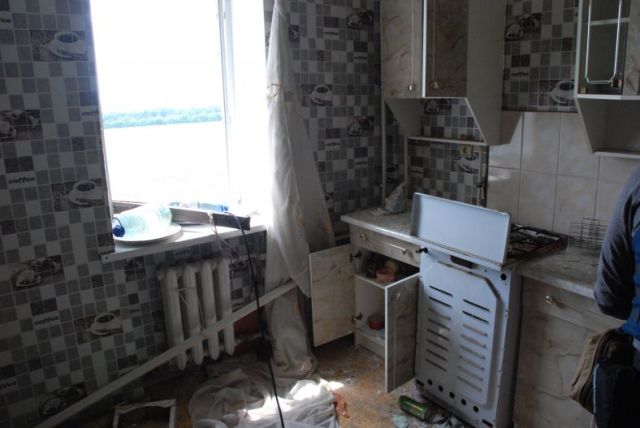 When they take only money and documents with them. When instead of a balcony, there is a gaping hole from a projectile fired from a “brotherly,” unrecognised, “republic” of “liberators.” 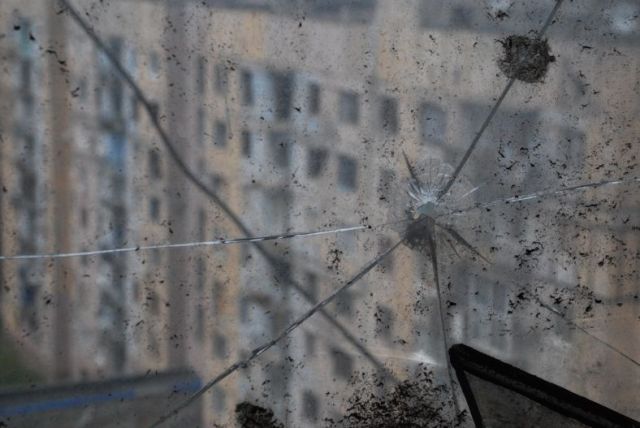 When among the abandoned children’s toys you can find mortar fragments, sharp as razors…

It is very easy to call for war in a place where you live, to invite foreign “defenders” into your home. It is even easier to stand in the way of the military columns of those who will be actually saving you from the aggressors. Only it is very difficult afterwards to explain to your children why, instead of festive concerts and happy, smiling people all around, you have to sit in a basement or to gather your belongings and flee to nowhere.

So, if someone suddenly has a desire to stand in front of columns of Ukrainian Army detachments, they should think about who will come instead of them and what “Russian world” they will bring along with them. And someone who doesn’t like to listen to the Ukrainian Jamala’s songs will be forced instead to listen to [Russian crooner Joseph] Kobzon. And to the sound of artillery salvos hitting their house.