Dmitry Tymchuk, Head of the Center for Military and Political Research, Coordinator of the Information Resistance group, Member of Parliament (People’s Front)
02.08.2016
Translated and edited by Voices of Ukraine

During the past weekend (02.06 – 02.07.2016), the situation in the ATO zone in Donbas was the most tense in the Donetsk (Mar’inka, Staromykhailivka, Pisky, Opytne, Avdiivka) and Alchevsk directions of operation (Zaitseve, the Zhovanka river), in the area of the Svitlodarsk bridgehead, and in the Telmanove – Hranitne area.

Units of Russian-terrorist troops, as per “tradition,” shelled Ukrainian troop positions in the vicinity of Pisky and Opytne. Several terrorist groups (8-10 personnel in each), moving under the covering fire of heavy machine guns, entered the neutral zone and opened fire on the ATO forces’ strongholds, using automatic small arms and machine guns. During the shellings, militants also used RPG’s (firing HE projectiles) and underbarrel grenade launchers. Terrorists operated in the vicinity of the destroyed radar station (the DAP) and in the private residences area on the outskirts of Spartak.

Heavy fire came down on the southern and eastern outskirts of Avdiivka, where terrorists deployed 82 mm automatic mortars (“Vasilek” 2B9 or similar), firing from the high grounds near the Yasynuvata junction. The “Zenith” stronghold and the remains of buildings near the vent header of the Butovska Mine also came under fire (militants used AGS-17’s and SPG-9’s).

A militant mortar unit (three 120 mm mortars) fired from positions in the private residences area in south Staromykhailivka. In this vicinity, terrorists also used the on-board weaponry of the two BTR-80’s that maneuvered through the area. From the northern part of the settlement, militants fired using SPG-9’s.

In the vicinity of Mar’inka, militants fired heavily on the ATO forces’ strongholds and positions, deploying four AGS-17’s from the “Crocodile” waste bank.

Militants also stepped up their activity in a number of other areas. Mortars were used in the Zhovanka – Zaitseve area, with support from heavy machine guns. Here, terrorists operated not only from the southern side of Zaitseve, but also from positions near Holmivskyi. Another terrorist mortar group is constantly operating from positions north of the Terykonna station (firing towards Zhovanka – Zaitseve as well as towards Mayorsk).

Terrorist formations have also been activated in the vicinity of the Svitlodarsk bridgehead. Heavy machine guns and stand-mounted grenade launchers (AGS-17 and SPG-9) were used against the ATO forces’ strongholds northeast of Rozsadky (from the direction of Veselohorivka), as well as on a number of Ukrainian troop strongholds and observation points east of Troitske (from the direction of Kalynove).

North of Staromarivka, terrorists deployed mortars from positions near Krasnyi Oktyabr and Pervomaiske, firing at the ATO forces’ stronghold north of Hranitne. A militant group stationed on positions north of the destroyed bridge provided supporting fire from machine guns and AGS-17’s.

In and around Donetsk, the “DNR Ministry of State Security” is deploying “filtering measures.” In addition to the stationary checkpoints, 12 mobile checkpoints were deployed, mainly near the city exits. Some of them are reinforced with armored vehicles. According to the rumors that are being circulated among militants, a search is underway for Ukrainian DRGs – supposedly, the “Kyiv junta,” unwilling to pass a law on the amnesty of terrorists, gave orders to eliminate the “DNR” higher-ups, including Zakharchenko, and to carry out a number of large-scale sabotage acts in Donetsk.

A combined unit of Russian marines dressed in “DNR” militant uniforms was identified in the Petrovskyi district of Donetsk (near Ratsionalizatoriv Street). An armored group (up to 10 BMP’s and MT-LB’s) was spotted south of that area, and six tanks further east.

Militant mobile groups were identified in Horlivka, near Michurina Street and the Komarova residential estate. Each group has 1-2 APC’s, 2-3 trucks with 82 mm mortars, SPG-9’s, sometimes ZU-23-2 or anti-tank guns, and 20-30 personnel. These groups take positions covertly, fire on targets, and promptly leave. Similar groups were previously spotted in the Petrovskyi district of Donetsk, in the Putilovka area [of Donetsk], near the Novyi Horniak and Vtoraya Ploshchadka neighborhoods. 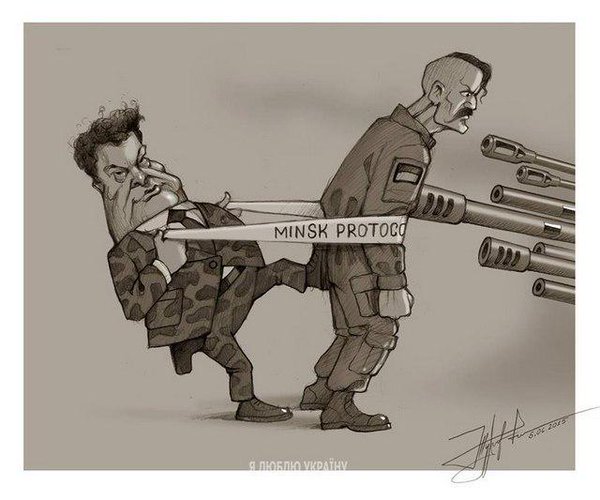