Dmitry Tymchuk, Head of the Center for Military and Political Research, Coordinator of the Information Resistance group, Member of Parliament (People’s Front)
01.26.2016
Translated and edited by Voices of Ukraine 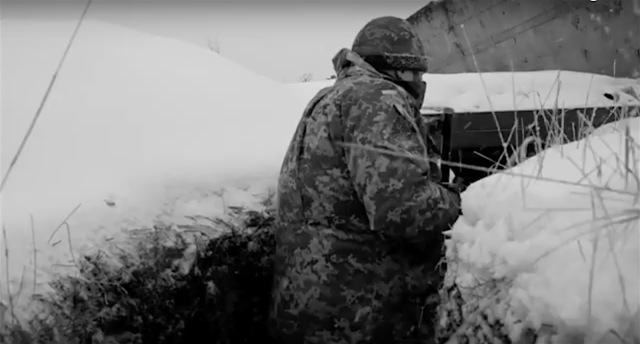 During the past 24 hours, militants “traditionally” were the most active near Donetsk. Shellings took place in the vicinity of Opytne (from the direction of the DAP and Spartak, with AGS-17’s and heavy machine guns), south of Avdiivka (at least three 82 mm mortars, and a sniper group), and Pisky (shelled by a pair of BTR-80’s from the direction of Vtoraya Ploshchadka private housing estate, with occasional participation of AGS-17’s from the direction of Zhobunky; the enemy also deployed tanks in this area).

South of Mar’inka, terrorist units were observed regrouping at the front line, under covering fire from SPG-9’s and ZU-23-2’s.

In an area east of Novhorodske, militants attempted to bring down heavy small arms and grenade launcher fire on the ATO forces’ advanced observation points, but failed. Specifically, an enemy infantry group entered the neutral zone from the direction of the Zalizna Balka and opened fire, but came under return fire of the ATO forces and retreated to their initial lines under cover of 82 mm mortars and several AGS-17’s.

Southeast of Novoselivka, a militant group attempted to approach one of the Ukrainian troops’ advanced strongholds to a close range. A firefight broke out, resulting in the enemy being forced back. The militants’ retreat was covered by fire from two 82 mm mortars.

Erratic enemy fire (from machine guns, automatic weapons, and RPG’s) was recorded south of Mayorsk and in the northern part of Zaitseve. South of Skeleve, unsighted fire was carried out against the ATO forces’ positions from a heavy machine gun. Unsighed machine gun fire (PKM and RPK machine guns) also came in the direction of Ukrainian troop positions near Hranitne.

Militants are transferring armored equipment towards Panteleimonivka, by night time, 1-2 pieces at a time. During the past 48 hours, at least six ACV’s and MT-LB’s were transferred, as well as two tanks.

Militant tanks were spotted in the vicinity of Bezymenne (3 tanks), as part of the enemy’s efforts to reinforce the reserve for the flank of the unit holding positions along the Zaichenko – Sakhanka line.

A unit of one company in strength, with four tanks, two BMP-2′, and one BTR-80, arrived at the “Torez” militant training center. The unit is staffed with “mobilized” local residents who arrived to receive “beginner training.”

Information is circulating in the “DNR’s political circles” that in spring of this year [2016], the Russian side is going to depose Oleksander Zakharchenko as the head of the “DNR” and appoint a new “leader.” The list of alleged candidates includes such names as Mykola Azarov [former Prime Minister of Ukraine under the Viktor Yanukovych administration], Serhiy Arbuzov [former First Deputy Minister of Ukraine under the Viktor Yanukovych administration], and an unnamed governor of one of the southern oblasts of the Russian Federation, whose appointment, supposedly, is being lobbied by Boris Gryzlov [Russian politician, one of the leaders of the United Russia party].

Rumors are also being spread throughout the “DNR” that the leaders of the SBU [Security Service of Ukraine] granted permission for ISIS militants to be hosted in Ukrainian health resorts. Allegedly, this decision is related to the increasing numbers of Islamic militants arriving to Turkish hospitals from Syria, and, according to a supposed arrangement with the Turkish government, some of the wounded ISIS militants are being redirected to Ukraine.