Posted on November 8, 2015 by Maria Stanislav

Dmitry Tymchuk, Head of the Center for Military and Political Research, Coordinator of the Information Resistance group, Member of Parliament (People’s Front)
11.06.2015
Translated and edited by Voices of Ukraine

High levels of activity by Russian-terrorist forces in the anti-terrorist operation [ATO] zone have been noted. In addition to small arms (heavy machine guns included), miltants over the past 24 hours used AGS-17 and AGS-21 automatic stand-mounted grenade launchers, SPG-9 “Kopye” heavy antitank grenade launchers, 82 mm mortars and ZU-23-2 anti-aircraft systems. At the same time, there was a dramatic increase across several sectors in the number of attempts by enemy forces’ sabotage and reconnaissance groups [DRG] to infiltrate the ATO forces’ rear.

The strongholds and advanced positions of the ATO forces near Shchastya and Trokhizbenka came under fire several times (four mortars and three AGS-17s were used).

The presence of heavy armor was observed in the Kyivskyi district of Donetsk, despite militants’ assertions that it had been withdrawn. The IR group’s network
recorded four terrorist tanks near the “Tochmash” plant, and two more tanks near the “Monolith” stadium.

A Russian-terrorist forces “back-up battalion,” part of the so-called “Horlivka garrison,” was deployed at the front line north of Horlivka (between the Maiorske automobile market and Holmivskyi). The battalion’s sub-units (“motorised infantry companies”) have been deployed in a double-echelon configuration (two companies in front, one company behind). These forces have twenty eight armored vehicles at their disposal.

A Russian Spetsnaz DRG group (up to 15 personnel) set out on a “raid” in the direction of Pisky from its permanent place of deployment (Rozy Lyuksemburh [Rosa Luxemburg] St., Donetsk). A DRG unit from the “Vostok” battalion (up to 20 men) left Mospyne (where it is deployed in Secondary School No. 154), bound for Mar’inka. Two DRG units (up to 25 men in each) departed from Debaltseve to penetrate the ATO forces’ operational and tactical rear, disguised as refugees and holding documents identifying them as Ukrainian citizens.

As directed by the leadership of the Russian Federation Armed Forces, dead militants from the “Donetsk People’s Republic [DNR] Army” are being “dismissed” retroactively to try to conceal troop losses.

Official units of the Federal Security Service (FSB) and the Main Intelligence Directorate of the General Staff of the Armed Forces [GRU] of the Russian Federation operating in Donbas have joined forces to co-ordinate their operations in the ATO zone (to gather intelligence), and in other oblasts of Ukraine (to prepare and execute terrorist attacks and sabotage). The two intelligence services have set up a joint coordination center in Donetsk.

The “DNR” ringleaders are planning to “rehabilitate” members of illegal armed gangs from among the so-called “Cossack units” disbanded in May 2015. Some of these “Cossacks” are still held in detention facility no. 5, in occupied Donetsk. Special commissions are expected to be set up to review the cases of arrested Cossack militants.

“Food rations” from Rinat Akhmetov’s “We Will Help” (“Pomozhem”) foundation are being distributed in occupied areas of Donetsk oblast to employees of the so-called “DNR Ministry of State Security.” 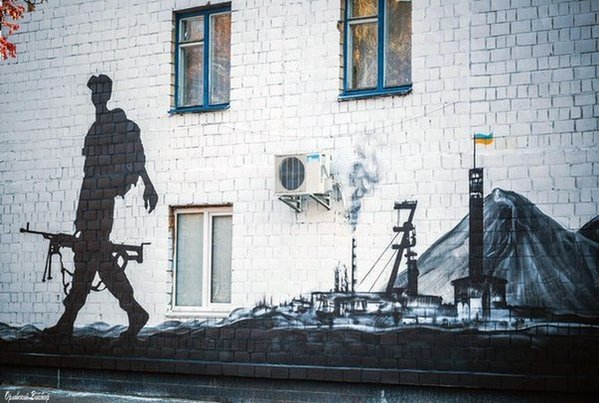 Mural in Kyiv. (via @kievtypical)