Dmitry Tymchuk, Head of the Center for Military and Political Research, Coordinator of the Information Resistance group, Member of Parliament (People’s Front)
07.17.2015
Translated and edited by Voices of Ukraine

Russian-terrorist troops in Donbas continued actively firing on the ATO forces positions and civilian objects in ways that prevent the OSCE from recording violations of the Minsk Agreements. The main activity – up to two or three shellings – takes place in the evening or at night (when OSCE patrols are virtually absent). In shelling, terrorist use heavy weapons – artillery of a caliber greater than 100 mm, 120 mm mortars and armored vehicles.

At the same time, we have observed escalation of terrorist-sabotage activity (“small-scale warfare”) by militants in the tactical and operational-tactical rear of the ATO forces. During the past day, several enemy sabotage and reconnaissance groups (mostly consisting of special forces units of the GRU of the General Staff of the Russian Armed Forces) were performing combat missions in the Ukrainian forces’ rear flanks. Militants’ sabotage and reconnaissance groups are actively laying minefields and “hunting” for lone Ukrainian servicemen or supply vehicles travelling without an armed escort.

To the west of Donetsk (along the line Mar’inka – Krasnohorivka – Pisky – Opytne – Avdiivka – Shumy), terrorists continue virtually uninterrupted fire from various weapons, and make active use of armored vehicles and tanks. In the area of the settlement of Opytne, militants fired from 120 mm mortars and used 122 mm artillery nearer to Avdiivka. Near the settlements of Krasnohorivka and Pisky, shelling by militant tanks and ZU-23-2s artillery guns was noted.

Enemy sniper groups continue operating in the vicinity of ​​Mar’inka and Krasnohorivka (brick factory), firing on the ATO forces’ positions from the cover of greenery.

Aerial views of Shyrokyne, before and after Kremlin’s “liberation.” Photo: social media

In the coastal region (near Shyrokyne and between Hnutove and Talakivka), terrorists fired using small arms. The use of 82 mm mortars by militants was also recorded.

Near the settlement of Shchastya, the enemy continues to carry out armed provocations and spontaneous attacks. They are also attempting to infiltrate the Ukrainian troops’ rear by dispatching sabotage and reconnaissance units en masse. In this sector, the militants actively use AGS-17 automatic grenade launchers for attack, as well as to provide cover fire for infiltrating sabotage and reconnaissance units.

In the past day, terrorists carried out repeated fire strikes on Novotoshkivka and Krymske using 122 mm artillery (mainly targeting the ATO strongholds).

Terrorists brought in six tanks and four armored fighting vehicles (three BMP-2 and one MT-LB) to the vicinity of Donetsk Airport.

Military trucks on the move back and forth today in Donetsk, Ukraine.

The militants are transferring or regrouping artillery in several areas simultaneously:

• east of Panteleimonivka (the Panteleimonivka – Korsun – Shevchenko triangle), Information Resistance operatives noted the appearance of six batteries of 122 mm D-30 howitzers, as well as an artillery command and control station;

• A battery of Grad BM-21 122 mm MLRS has been transferred to Horlivka;

• In the area of Dokuchajevsk and Styla, militants are preparing firing positions for the artillery of the Russian-terrorist tactical group operating in the area. Currently, the artillery units themselves are located to the east of the Mospyne – Komsomolske line (one artillery unit, three batteries – five 122 mm or 152 mm self-propelled guns, eight D-30 cannon artillery units, and eight Grad BM-21 MLRS systems). 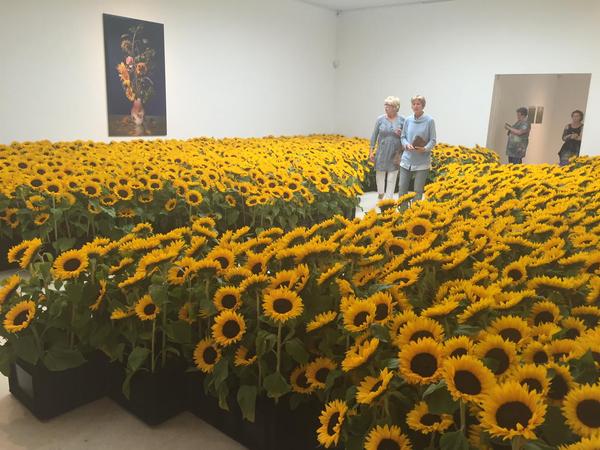 Sunflower memorial in Amsterdam for the victims of flight MH17 downed in the fields of eastern Ukraine 1 year ago today. Source