The Music of Warriors: a checkpoint on the Ukrainian cultural front

Wearing a balaclava and playing the Anthem of Ukraine on a cello in the snow in Kyiv, a Ukraine musician with the call sign “Martin” in a soldier’s uniform participates in a project entitled the Music of Warriors. The project is simply about the fact that there is heart and soul in the Ukrainian army. Military and musicians perform various classical and well-known Ukrainian songs on classical and Ukrainian musical instruments. The first work is the video posted on February 8th of “Martin’s” Anthem of Ukraine. 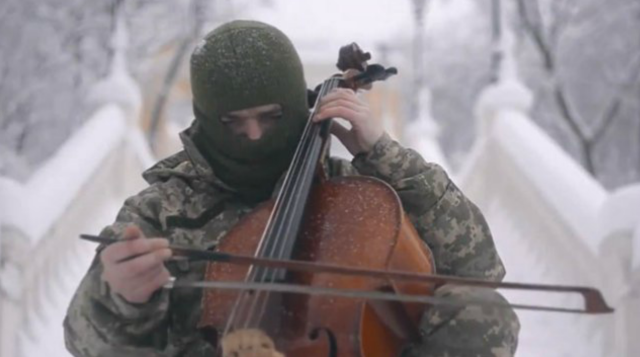 The Music of Warriors patriotic art project is “one of the checkpoints on the Ukrainian cultural front” according to its founder Oleksander Tkachuk, written on the project’s Facebook page. The music is recorded in the “Spravzhniy [Real] Sound” studio in Kyiv. Tkachuk also says that he “aims to prove that music is also a weapon.”

“A musician is a warrior – the musical instrument is a weapon in his/her hands. They do not kill with music – but rather, give a chance for life and hope, for the better.”

“The Ukrainian army, Ukrainian soldiers, these are not the ‘punishers’ Russian media likes to talk about. These are educated, cultured, intelligent citizens protecting their own country,” Tkachuk stated to Ukrainian media.

In the second piece, posted on February 13th, the popular song “Lenta Za Lentoyu” [Ribbon by Ribbon], an old Ukrainian Insurgent Army tune that inspired rebels to defend an independent Ukraine and was played often during Euromaidan, is played here on bagpipes by a soldier with the call sign “Dudar.” “It uplifts the soldier’s spirit,” Tkachuk explains. “The bagpipe is an instrument by whose sounds the Scots gained their independence.” Yevhen “Dudar” himself was often heard on playing the anthem and other melodies on Kyiv’s Independence Square during some of the worst storming of Maidan last year – it had a huge affect calming people’s nerves. Espreso.TV did an interview with him in Ukrainian and Russian in relation to the Music of Warriors project. In the video, he is seen playing his bagpipes at the historical site of the temple of the ancient Slavic pagan god Perun, on Kyiv’s Lysa Hora [Bald Mountain] and in front of Fort Lysohirskyy’s postern No.4 in the same locale.  Have a listen:

Tkachuk explained on his Facebook page: “I want to make it clear in advance – I am not a fighter, not a soldier. At least not for now. The name of this cultural project should not be taken literally. This is the creative idea of the author of the project. The aim of the project – is to, in this way, attract the attention of the public to the Ukrainian military, their needs and requirements. That is why according to the rules and conditions of the project musicians wear camouflage.”

“Sooner or later, the war will end. But the art that was created during the war and by soldiers, it will last for the ages,” Tkachuk stated during an Espreso.TV interview.

Future videos include bandurist Jaroslav Dzhus, “a musician who has perfect pitch,” whose call sign is “Burshtyn” [Amber]. His video will launch by the end of this week and will be devoted to the anniversary of the shootings on Maidan. The music is being kept secret at the moment but Tkachuk promises “it is powerful.” He is also interested in launching a second project involving all the ‘songs from the heart’ composed by Ukrainian soldiers at the front to record them for posterity.

“We are doing this not only for the soldiers, but for people who are in the occupied territories who for some reason consider us to be their enemies. We aren’t their enemies. We want to coexist in peace,” Tkachuk stated.

Source: The Music of Warriors FB

3 Responses to The Music of Warriors: a checkpoint on the Ukrainian cultural front