Posted on January 2, 2015 by chervonaruta

Dmitry Tymchuk, Head of the Center for Military and Political Research, Coordinator of the Information Resistance group, Member of Parliament (People’s Front)
01.02.2015
Translated and edited by Voices of Ukraine

Among the insurgents killed during their attempt to attack the positions of Ukrainian troops near the settlement of Pisky on December 31, 2014, four of them, disguised as the so-called “militia,” turned out to be Russian marines from the Black Sea Fleet of the Russian Federation. All four of them were contract soldiers.

A fresh formation of the Russian troops has arrived in Horlivka (up to 300 people), who took the city under their control. The arriving soldiers are dressed in new camouflage uniforms without insignias; they are well equipped and armed. Since their arrival in the city, the number of local insurgents has sharply decreased.

In the area of the settlement of Volnovakha (near Mykolayivka), the units of Russian-terrorist troops have once again moved to the advanced positions of the Ukrainian troops. Two fresh formations numbering up to 200 people and six armored vehicles have been observed. Also, an active intelligence reconnaissance has been observed in this area (drones and enemy sabotage and reconnaissance groups).

South of Starobesheve, a battery of the enemy’s self-propelled howitzer 2S1 “Gvozdika” has been observed on the march (4 units of the 2S1, several KAMAZ [cargo trucks] with shells). One IFV [infantry fighting vehicle] and several cargo trucks with infantry units on board provided military guard during the march. The battery moved into advanced firing positions.

In the vicinity of Trokhizbenka, Russian-terrorist troops once again began to practice the tactics of “nomadic tanks” (a similar situation exists at the Donetsk airport). Tank crews are mostly staffed by the military personnel of the Russian Federation. The crews seem to engage in formulaic (“textbook”) manoeuvres: a covert entering of firing positions, 3-4 aimed shots, an abrupt exit and a change of position. They use infantry for cover and preliminary exploration of the object of their attack without fail. Sometimes, mortar strikes are launched on the lead positions, in order to suppress the anti-tank weapons of Ukrainian troops and to ensure the exit of the [Russian] tanks.

In the Dokuchajevsk – Telmanove stretch, Russian-terrorist troops began to consolidate their battle formations after the “collapse” of their leading edge positions (due to the recent mass defections by local insurgents). Formations that have “proven” themselves get moved forward, staffed with insurgents from “Oplot” and “Vostok,” as well as Russian mercenaries.

In the vicinity of Hranytne, the enemy brought a consolidated artillery group to the first line [of the front]. In collaboration with the mortar detachments, the cannon artillery strikes at the positions of the Ukrainian troops in this area.

In the “DNR government,” the search campaign for “Ukrainian spies” continues. According to assurances made by the leadership of “the DNR ministry of national security,” all ministers and department heads will undergo a special audit. The disappearance of a number of “officials” has been noted as well.

At the same time, pro-Ukrainian inscriptions [graffiti] began to appear again in public places in Donetsk. The “DNR security agencies” are taking measures to identify “the Ukrainian underground.” 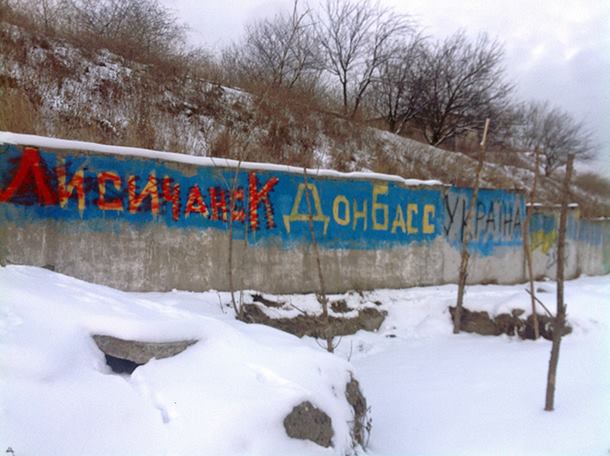 Patriotic graffiti wars in Donbas continue despite best efforts of “DNR government” to suppress them: “Lysychansk – Donbas – Ukraine.” This one is from Dec. 3