Dmitry Tymchuk, Head of the Center for Military and Political Research, Coordinator of the Information Resistance group, Member of Parliament (People’s Front)
12.22.2014
Translated and edited by Voices of Ukraine

Over the past weekend, the departure of a majority of units of Russian-terrorist forces was recorded from the line of contact with the Ukrainian troops in Luhansk and Donetsk regions. This process is not observed in some areas – in particular, the enemy leaves its troops “at the front line” in the Pervomaisk – Lysychansk stretch, as well as near the settlements of Donetsk, Telmanove, Novoazovsk, and in the vicinity of the Bakhmut Highway [Donetsk region]. Russian army units and mercenaries are the first to leave the line of contact; units of local insurgents remain primarily in their positions.

At the same time, there has been an increase in efforts by the leadership of the Russian-terrorist troops to strengthen the centralization of command and to control the discipline of the units. Failure to obey the “central authority” on behalf of individual commanders and terrorist soldiers entails a threat of physical punishment up to a “death penalty.”

The concentration of enemy troops is currently underway along the Bakhmut Highway. Besides an airborne company tactical group that operated here earlier and the artillery group that provides its support (which shortened their distance to our advanced positions to a minimum), additional units began arriving to the second line [of the front].

[Our sources] recorded the arrival of another company tactical group and several gangs from A. Mozgovoy’s formation. The total number of enemy forces in the area of our checkpoints #29 and #31 has reached 600 people; a tank unit (up to 7 tanks), an artillery group (two-battery mixed artillery battalion, besides the cannon artillery – at least 4 MLRS), and about 25 armored fighting vehicles (AFVs) have been observed. The insurgents are armed with a large number of mortars, anti-tank systems, LNGs [anti-tank grenade launcher easels], RPGs; “Bumblebee” flamethrowers were observed as well. In this area, the enemy fires at the positions of our troops with small arms, sometimes using mortars.

In the area of the settlement of Hranitne, the Russian troops withdrew to the second echelon, two “mobile groups” of local insurgents remained “on the front line” (equipped with NSV-12.7 “Utes” large-caliber machine guns and 120-mm mortars). These groups were tasked with discharging harassing fire onto the positions of Ukrainian troops.

[Our sources] have observed a new method of regrouping, that the enemy forces use to conceal their progression to the advanced positions. Now, the personnel and its supporting equipment are moved separately. At first, the personnel arrived at the positions (mostly by civilian transportation), then the equipment and heavy weapons “roll over” in small groups (the tanks and artillery come last). 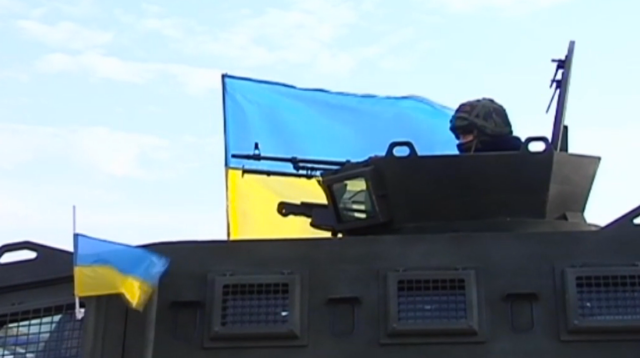