By facenews.ua
11.01.2014
Translated by Yulia Nesterenko and edited by Voices of Ukraine 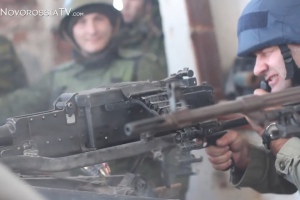 Russians with expensive rifles are increasingly appearing on the front lines, states the Ukrainian military.

Ukrainian volunteers from the ‘Holy Mary’ Battalion, who defend the area around Mariupol, commented on a resonant video with Porechenkov, Glavnoe informs.

Now Ukrainian military wait with impatience on the front line for Russian actor Mikhail Porechenkov, certainly, not as an actor, but as a terrorist, who shot ‘cyborgs’ [enemy nickname for Ukrainian forces defending Donetsk airport] from a heavy machine gun. It is said that this meeting will be without applause.

“This is our enemy, of course, our battalion ‘Holy Mary’ will find him,” the company Commander of the battalion, Andrey Vatolkin, noted.

Soldiers immediately noted that the actor shoots with live ammunition and from even a large-caliber NSV-12.7 – this machine gun shoots through sandbags and even concrete walls and just explodes human bodies.

“The Marines from Feodosiya don’t mince their words, they remember that this same Mikhail Porechenkov lived in their unit for weeks during the shooting of the film ‘The 9th Company.’

The day before yesterday the Marines lost two of their fighters, because on the enemy side someone like Porechenkov decided to have fun and shoot.”

Nobody in the 9th Battalion of Territorial Defense is surprised at such a video. They say that they already noticed long ago – Russians with the most expensive sniper rifles, for whom it is a new game to shoot Ukrainians, increasingly keep popping up at the front.

“The Russians are coming on safari. Here they have large-caliber weapons of 12.7 mm. And they just come for a day of shooting. There are even rough gauge calibre balls, the Dragunov sniper rifle has a thin one, so we keep our heads down,” explained a member of the territorial defense.

With their sniper rifles the Ukrainian military don’t reach these shooters, which is why they usually shoot them from more serious calibers, according to the publication.