Posted on November 8, 2014 by chervonaruta

Dmitry Tymchuk, Head of the Center for Military and Political Research, Coordinator of the Information Resistance group
11.08.2014
Translated and edited by Voices of Ukraine

In the past 24 hours, there were more than 40 attacks by Russian-terrorist forces on the positions of ATO forces.

The most intense situation remains in the directions of Debaltseve, Donetsk and Luhansk – 15, 12 and 8 shellings each, respectively.

In particular, our checkpoints and strongholds in the area of Debaltseve have undergone attacks by insurgents 6 times,  fire strikes were deposited 4 times over Trokhizbenka, and the positions of ATO forces near the settlements of Avdiivka, Nikishyne, Crimea were fired on 3 times.

Since the announcement of a temporary ceasefire, Russian troops and illegal armed groups violated the agreement more than 2,500 times.

NSDC [National Security and Defense Council of Ukraine]: “No one is talking about an open attack by insurgents. It is obvious that there are not enough troops on the territory of Ukraine for the large-scale attack. According to the art of war, the attacker must be four or five times stronger than those who defend themselves. The terrorists don’t have this; the Ukrainian military have the  advantage of force.”

To argue with the NSDC is impossible (besides, the “gold standard” ratio between the defending and attacking forces at the tactical level is still 1 to 3, at the strategic level – 1 to 2, and even less is allowable). So let’s not argue. Let’s just look at the NSDC map from September 5th and November 6th. And think about this.

I understand the reluctance of government agencies to inflate panic. This is an absolutely correct approach. But it’s still worth a sober assessment of the situation and making appropriate conclusions – hoping for the best, preparing for the worst. 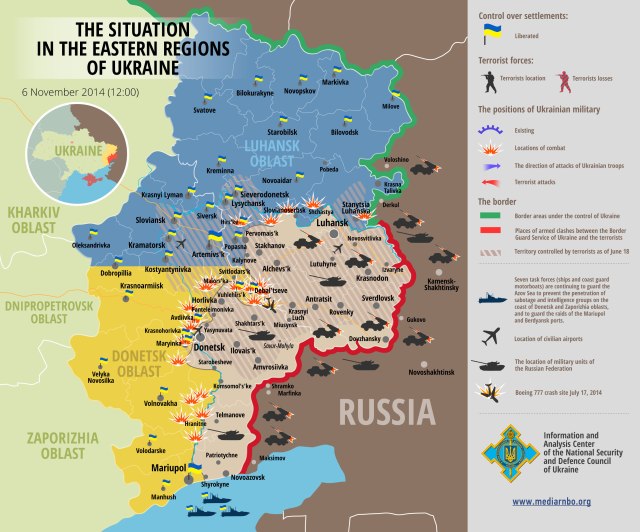