Sergei Loiko, photojournalist and correspondent for the L. A. Times currently stationed in Donetsk, has posted this photo essay from an event that occurred on October 19th during ongoing battles for Donetsk airport.

Russian military forces, mercenaries and insurgents have been battling Ukrainian forces, some of whom are volunteers, for control of the airport for weeks, but Ukrainian forces have so far managed to heroically hold strong against constant shelling, ground raids and attacks. As a result, the enemy has dubbed the men holding the airport, “Cyborgs.” While heroically defending the airport, one such Cyborg was killed. He was a tank driver and images of the rescue of his remains for transport home and burial were posted online with commentary by the photographer.

Please be advised this ongoing story of brothers-in-arms has explicit war imagery that is disturbing!

His comrades, under fire, find a box suitable for a coffin:

The tanker’s remains are put into the box: 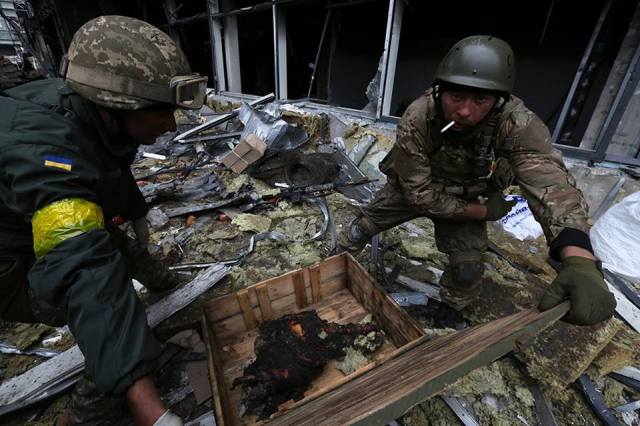 This guy is risking his life to send a tank driver home. His name is Slava. He volunteered. Nobody forced him to do it. Look him in the eye. He remains at the airport:

This guy is risking his life to send a tank driver home also. His name is Mike. He volunteered. Nobody forced him to do it. Look him in the eye. He remains at the airport: