Dmitry Tymchuk, Head of the Center for Military and Political Research, Coordinator of the Information Resistance group
10.14.2014
Translated and edited by Voices of Ukraine 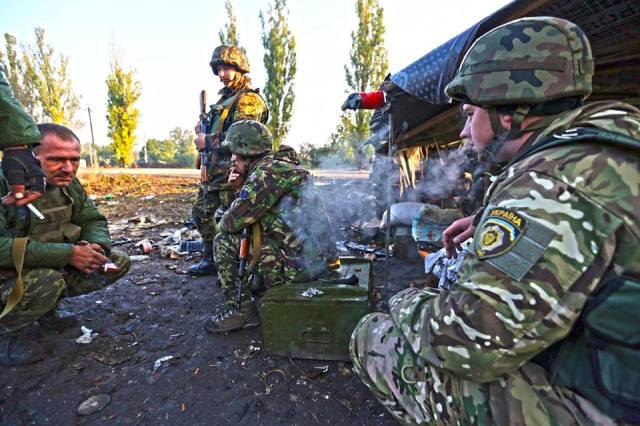 Last night in the ATO zone, it was relatively calm. One firing was reported – yesterday around 23:00 [11pm EEST] militants fired an MLRS “Grad” onto positions of our troops near the village of Tonenke.

Over the past 24 hours, Russian-terrorist forces violated the ceasefire silence more than 30 times, shelling our positions with all kinds of weapons provided to terrorists by the Russian Federation. Militants also made ​​another unsuccessful attempt to storm the airport in Donetsk.

The most active shelling onto the positions of our troops occurred as follows:

• The Donetsk Airport, in the populated areas of Pisky, Chornukhyne, in the suburbs of Debaltseve – where 3 fire strikes of the Russian-terrorist forces were recorded.

• The positions of ATO [anti-terrorism operation] forces near the settlements of Talakivka, Olkhovatka, Avdiivka, Tonenke were attacked twice.

Units under the control of terrorist leader I. Bezler (“Devil”), left a number of checkpoints on the right flank of the Debaltseve beachhead and moved to the area of fortified positions previously occupied by them in Horlivka. In this regard, the “DNR” [‘Donetsk People’s Republic’] management demanded explanations of Bezler, but he did not argue this withdrawal of troops from Debaltseve whatsoever.

The “mobilization activities” amongst former employees of Ukraine’s Interior Ministry, who remained in the “DNR” have come to no avail. Attempts by the “DNR” leadership to turn them into “special forces” have become a fiasco because of the instant desertion of more than two thirds of the personnel comprising these subdivisions.

In the Telmanove–Novoazovsk strip, Russian military and insurgents under their control carried out an operation on an unprecedented scale to search for their missing DRG [Russian sabotage and intelligence group]. According to our data, citizens of the Russian Federation also are involved in the “search operation,” traveling in vehicles with the designation “OSCE.” Information about the destruction of the given DRG has been received across the channels of Ukrainian troop military control bodies. The circumstances of the disappearance of the DRG and the reasons for its “value” to Russian command are currently unknown.

There has been a marked intensification of enemy UAV [unmanned aerial vehicle, i.e.: drone planes] reconnaissance flights in the district of Mariupol. Recently, the “drones” are run mainly in pairs.

In the district of ​​Perevalsk and Alchevsk there is exacerbated conflict between militant groups of local terrorists and troops of the so-called “Don Cossacks.” There have been several clashes between “LNR” [‘Luhansk People’s Republic] factions and A. Mozgovoy’s [Luhansk people’s] “militia.”

In areas controlled by the “LNR,” a massive, centralized collection is being organized of scrap metal in the form of battered weapons and equipment that cannot be restored. To do this, a number of local residents formed a special “scrap metal” command. These teams are working in areas where there was particularly fierce fighting. On this basis, conflicts have been observed with Russian soldiers who are trying to evacuate the equipment of their units in a battered state to the territory of the Russian Federation.

On territories controlled by the “LNR,” militants are strongly spreading rumors that today, on the occasion of the Orthodox Christian holiday of the Holy Virgin, Ukrainian troops will carry out artillery attacks on churches in the conflict zone. In connection with this, armed provocations on the part of Russian-terrorist troops under the guise of ATO forces cannot be excluded.

In the ATO zone, the civil-military cooperation group of the Armed Forces of Ukraine (the Ukrainian anologous structures, CIMIC – Civil-Military Cooperation) continues its work. The purpose of this structure – is the organization of cooperation between the military control with the civilian population, local authorities and organizations. The priority objective of this structure is the search and recovery of bodies of dead servicemen in the conflict zone (in the past month, this structure evacuated more than 130 bodies of dead soldiers). There is cooperation on this issue with the Ukrainian military groups of the “DNR” (often information about the whereabouts of the remains of our soldiers comes from them, and they also provide security in the evacuation of bodies). In absolutely stark contrast is the behavior of “LNR” terrorist groups who are not in contact, and do not allow for the possibility of carrying out the same work [in territories controlled by them]. On this issue, the “LNR” is not in contact with even the mediation representatives of the “DNR.”

Senior representatives of the “LNR” are expressing a claim to the Russian government about its reluctance to actively introduce the Russian ruble instead of the Ukrainian hryvnia in circulation in the occupied territories in the Donbas. Earlier, the “LNR” has repeatedly appealed to the Kremlin with the requirement to solve this problem, but always received the rejection of the Central Bank of the Russian Federation. In the “LNR’s” version, the reason for this is fear, on the part of the financial institutions of the Russian Federation, of receiving new sanctions by the West in the banking sector. At the same time, in areas controlled by the rebels, some working people are paid in rubles, but for the implementation of the currency they basically go into the territory of the Russian Federation.