Posted on September 7, 2014 by chervonaruta

By iPress.ua
09.05.2014
Translated by Stepan Nikitchuk and edited by Voices of Ukraine

“Now she is fighting for Mariupol with Azov Battalion” 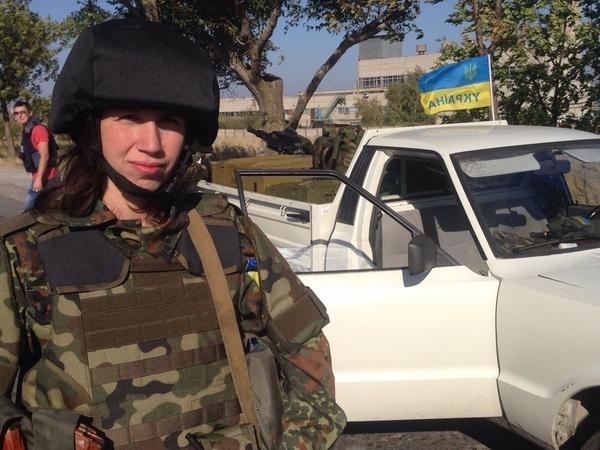 The Polish journalist Wojciech Boyanovski reported it on his Twitter page:

– he wrote under the photo, which shows Tetyana Chornovol in a flak jacket and a helmet.

As reported by iPress.ua, Tetyiana Chornovol’s husband Nicholai Berezovyi was a fighter in the volunteer Azov Battalion. On August 10, he was wounded and died from loss of blood during the battle for the city of Ilovaisk.

After the death of her husband, Tetyana Chornovol resigned from the position of the government commissioner for anti-corruption policy.

On September 4, about 20 tanks and several military vehicles and Russian fighters of the DNR [Donetsk People’s Republic] moved to Mariupol. In the area of the village of Shirokino, that is 23 km from Mariupol, Ukrainian troops stopped and repulsed their attack.

Yesterday the mayor of the city of Mariupol Yurii Hotlubey said that the local government has decided to form a volunteer battalion called Mariupol on the basis of the Azov Battalion.