4 journalists make it out of surrounded Ilovaisk (video + photos)

Video of our breakout from Ilovaisk. Filmed by Ivan Lubysh-Kirdey. The break out lasted about 20 minutes, and Vanya [Ivan] shot everything. Here – [is] 30 seconds of video, the firing from one of three ambushes. Thanks to Maks Levin for life [Maks was driving and was wounded but is ok]. Our car was the only one that managed to escape from the battlefield. It’s very scary for the guys from the battalions that were left there. Until now, it is known that only 100 of about 400 surrounded soldiers got out. Of them – 28 are volunteers, and the rest are from the Armed Forces of Ukraine. What is happening now with all who remained to take the fight – is not fully known.

By Maks Levin, Ukrainian LB.ua photojournalist embedded with Ukrainian forces in Ilovaisk
08.30.2014
Translated and edited by Voices of Ukraine

Ilovaisk is surrounded! Friends sound it on all trumpets – the guys in there are cannon fodder, they must be retrieved. Without a fight they will not surrender. But there are ambushes in three places! Aviation, I do not know! After the second ambush no one was driving behind us anymore – everyone was left there! Two of our tanks were knocked out for sure!

Friends, we cannot believe we’re alive. Today I (LB.ua), Markiyan Lyseiko (Ukrinform), Ivan Lyubesh-Kirdey, Heorhyi [Gosha] Tikhy (German TV ARD) broke out from surrounded Ilovaisk – experiencing a second day of birth. At one point during the first firing and ambush we broke forward a little. [We were] caught in two ambushes, in front of us they knocked out our tank – in short, today is the second time we were born. The driver (me) received minor wounds, broken windows – about three balls fell on them. One flew through the entire interior. It’s a miracle we did not have a few missiles (or grenade) shoot into us.

Thanks to our luck, or God (for whomever believes) and our decision at some point to get ahead of the column.

To our colleagues from Donbas, the Dniepro, the military is still there fighting. We pray that most of them come out from that hell. There is no support in the column! fuck fuck fuck.

And of course – our savior, the INFINITY from Alexander Radchenko – thankyouthankyouthankyou !!! Thank you that she goes so fast and so reliably. Thank you Alexander, we will repair the car, she saved four lives! 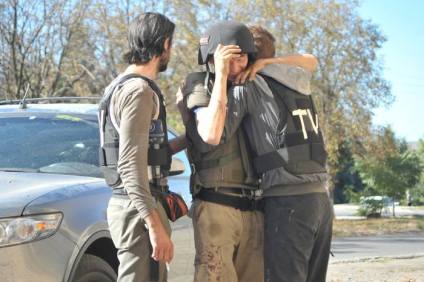