Posted on August 4, 2014 by chervonaruta

Posted by lj user frankensstein on Mysliwiec livejournal
08.01.2014
Translated and edited by Voices of Ukraine

To understand what a fierce fucking is now happening in Donbas, see this video. No expert assessments, no black boxes, no findings by the U.S. intelligence are needed any longer. This is the best proof that it is indeed the DNR macaque [Donetsk People’s Republic], who downed the Malaysian Boeing over Donbas.

The picture is pretty straightforward. A mad bald monkey who received money from a fool just like him, after watching the cartoons on [Russian] Channel One and overjoyed with screaming and whooping, starts the chaotic firing of the city of Shakhtarsk with mortars. What’s more, he also records it on camera.

So that you understand, the “Olympus” stadium from which the shelling is taking place is in downtown Shakhtarsk, five steps from the city administration building. Residential areas are on all sides [of the building]. The locals will not let [anyone] lie [about this], this can be confirmed by any local resident.

Map of Shakhtarsk with stadium in red.

On the map, the building the terrorists are shooting at (it is visible behind them in the video), is a small rectangle adjacent to the oval of the stadium. And what is that object just behind it? Can you see? These are the highrise communities #7 and Zhuravlivka, and also the Eastern neighborhood and residential homes. You can also open another map at this link and see for yourself.

Map of stadium with line of fire. 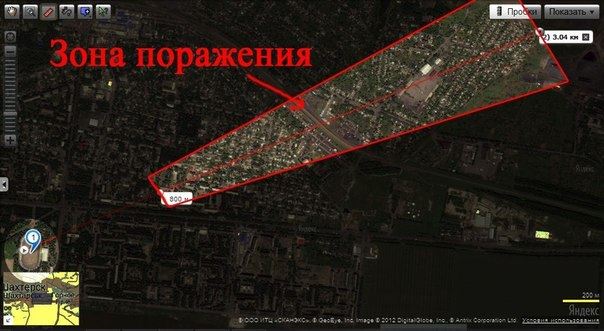 That is, with shouts of “take that, Banderites,” “for Novorossia [New Russia],” and paid with the money from some boneheaded Russian, the DNR terrorists are hammering live ammunition, hand-inscribed shells at the residential quarters of the mining town. In Russia, they certainly don’t know where this was filmed, and where the mortars are flying to. There, viewers will believe that they are truly Banderites they are shooting into, or maybe the whole point behind [such thinking] is that all of us are Banderites to them. So what if someone got killed, [they will] write it off as the [work of the Ukrainian] National Guard.

I think everyone has seen the consequences of such shellings.

If you still don’t understand what Novorossia is, then watch the video again. That’s what it is.

Update: I received photos from Shakhtarsk of the consequences of the chaotic shelling of the city by the DNR. Shells fell on residential homes in the vicinity of Chervonohvardiyska Street. The photos are made from the 16-story highrise on 73 Lenin Street. They were made in the northbound direction.

Be sure to send this video to your Russian relatives and friends. It won’t be broadcast on Channel One.