1. The SBU [Security Service of Ukraine] operatives detained five members of a subversive group, which planned to blow up railway tracks in Zaporizhzhya Oblast. The failed saboteurs received specialized training in demolition at a training camp in Russia’s Rostov Oblast.

A “mined terrorist war,” was declared by pro-Russian insurgents to the Ukrainian nation; having covered Donbas, it’s spreading beyond this territory.

I really hope that after we strangle and exorcise this scum from Ukraine, it will engage in its favorite occupation in a place it crawled out from–in Rostov Oblast. And better yet, in the suburbs of Moscow.

2. The Luhansk terrorists experienced a seasonal exacerbation. They claimed (and one should take a moment to reflect on this flight of morbid imagination) that… [they] are considering “freezing the deposits” of Ukrainian citizens throughout the territory under their control. As in, we will refund you with interest, when we have the money.

Is it just me or are these “LNR” [Luhansk People’s Republic] clowns subtly taunting residents of Luhansk with this idea? Well, they must be: you are stopped in an alley at night by some bloke with an automatic machine gun, he takes all your money and then says, supposedly, ‘bro, I have frozen your deposits. As soon as I get my business running–I will give it back with interest.’

Such songs from the mouths of robbers and rapists are nothing but black humor. It would be funny if it weren’t so sad.

1. The RNBO [National Security and Defense Council] estimated today that from the beginning of the ATO the territory controlled by terrorists decreased by half.

I would say this is a pleasing, but at the same time, a very cautious statement. Since the insurgents don’t have this many forces and means to completely control the entire territory “attributed” to them.

The ring around the terrorists is tightening. The only bad thing about it is that it’s too early to call it inviolable yet: the insurgents have direct access to the Ukrainian border with their bloodthirsty Mother–Russia. Once this devilish umbilical cord is cut, and the ring gets closed, there will be only one step to our victory. 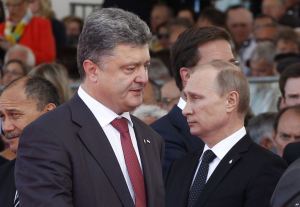 2. President Petro Poroshenko promised not to use aviation and artillery in Donetsk. The Russian “Caucasus methods,” employing the tactics of a scorched earth policy–is not for Ukraine.

Here I would like to add that the RNBO statement regarding the plans of the ATO forces to block Donetsk and Luhansk caused unhealthy excitement in the media, especially the foreign media. Everyone fancies a blockade.

Today, I’ve grown tired of explaining to journalists that nobody is going to set up a “besieged Leningrad.” It’s only a matter of preventing an influx of mercenaries and weapons into these cities. Indeed, without such a blockage of major hotbeds of terrorism (simultaneously with the complete blockade of the state border), the ATO could go on forever.

3. The office of the High Representative of the Union for Foreign Affairs and Security Policy [Maja Kocijančič] announced today that Ukraine has the right and duty to defend sovereignty, law and order within its borders.

This is the Brussels response to the statement by the Russian Foreign Ministry about the need for a sharp reaction on behalf of the EU in response to the “forceful actions by the Ukrainian army” in eastern Ukraine.

I (think, like many of you) spend every day listening to the statements of European officials and politicians with mixed feelings. They will either sit under Putin or their conscience will prevail and they will support Ukraine. Frankly, I’m tired of both criticizing the Europeans or taking my hat off to them. They should finally make up their minds somehow. But for today’s [official] EU response–thank you, of course.