Donbas Has Always Been Ukraine: the Holodomor and Russification Legacies

Ukraine Scholars on Social Media
06.05.2014
Edited by Voices of Ukraine

Editor: This was taken from a discussion today in Ukraine Scholars on Social Media. It is presented here to point to factors that are not discussed in the mass media regarding current events in Ukraine. That is, certain specific historic factors that inform the regional and national consciousness of Ukraine (and its diaspora) that are both painful and more nuanced than the simplistic generalizations of “east” vs “west” Ukraine, and “Russian” vs “Ukrainian” speaking Ukrainians. Naming these factors for what they are in the larger discussion and articulating them more fully is another step in the direction of healing and moving forward with united purpose in civil society, education, government and business.

Motria Poshyvanyk Caudill: A bit of history.
Did you know that many people from central Ukraine fled to the Donbas during the Holodomor [man-made famine that exterminated through starvation]? My grandparents were in their early 20’s. After being thrown off their farmland, they headed east, where they could work for food–in the mines, factories, construction– anything. I recently pulled out my grandfather’s life story and mapped out the cities where he lived from 1932-35 (see below). Who says Donbas isn’t Ukraine? How many of us wouldn’t be here today if it weren’t for the Donbas?

Roxolana Slobodian: The problem of Eastern Ukraine is that during Soviet times, because of the natural resources in Eastern Ukraine, the Kremlin always had tight control of that region and sent many Russians from Russia to live there. They were Communists that were working for the Kremlin government with a goal to keep rigid control over the region and loyalty to the Kremlin.

Russification was part of that control. The same was with Crimea. All the Tatar people were deported from Crimea and families from Russia–mostly military and government–were relocated to live there.

Alexandra Stefanyshyn: Donbas has always been Ukraine. Also Stalin had to make up numbers since he murdered between 7-10 million Ukranians with HOLODOMOR (Artificial Famine-orchestrated by Stalin), and that is why we have so many Russians living in Ukraine.

Olena Sanjara: Not only that. My grandparents’ farm was expropriated during the forced collectivization, and they were shipped in a freight train with many well-to-do families like them to work in a concentration camp close to Archangelsk. When my grandmother ran away from the camp when she was 18 and came back to the area she was from (close to Kharkiv), most relatives and neighbors were dead from the Holodomor. So, not only millions were starved, many hundreds of thousands were exiled and died in concentration camps in Russia. And then, of course, they brought in millions of ethnic Russians to work in the factories, plants, mines, etc.

Motria Poshyvanyk Caudill:‎ Motyl and others have written about the Donbas’ economic drain on the rest of the country, that there are advantages to letting it go. But it would be useful to highlight why Donbas matters to Ukrainians and the psychic wound that would result from its loss. The current fighting is painful on many levels. In the diaspora we are mostly western Ukrainians (my mother’s side, too), so I think a lot of people would be educated if you put something together. 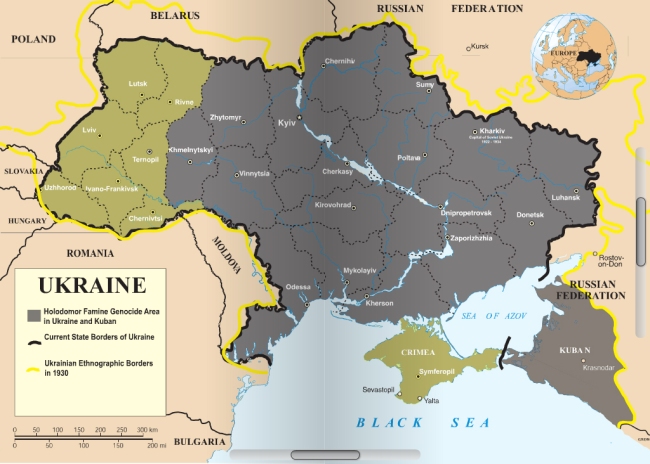 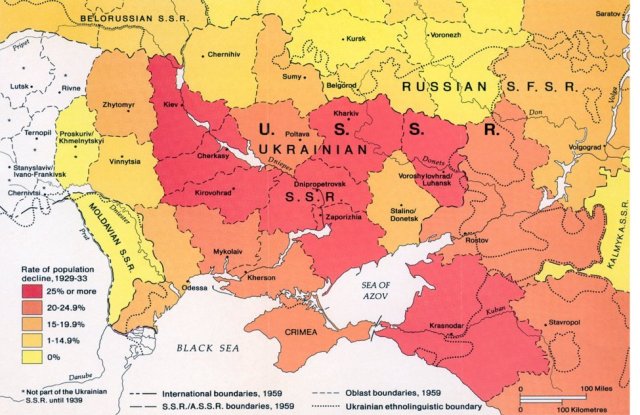 Oleksandr Kramarenko‘s excellent article on the consequences of the Holodomor on the Donbas region as well as on Ukraine’s national identity and leadership, a must read
http://www.day.kiev.ua/en/article/close/so-called-holodomor

Jeanette Seiffert, The significance of the Donbas [to Russia]
http://www.dw.de/the-significance-of-the-donbas/a-17567049

Harvest of Despair film on the Holodomor (narrated by Jack Palance)
http://www.ucrdc.org/Film-Harvest_of_Despair.html

Please feel free to add other links and articles in the comments so we can grow this discussion.

3 Responses to Donbas Has Always Been Ukraine: the Holodomor and Russification Legacies