Angelina Jolie says she and Brad Pitt pray for Ukraine and hope for it’s unity in exclusive interview for TSN.UA in London:

“I was so worried, we both in the family are worried, and we pray that in Ukraine there is order and that you are united.”

On the video, Ukrainian journalist Natalka Pisnya says to Jolie that she was told she is only allowed to speak about the movie premier and Jolie says, “Well, they may have asked you that but no one asked me that. You know, I am with you. I worry and I pray.” The journalist then gives her a t-shirt from Maidan saying she knows how Jolie likes t-shirts and hats. 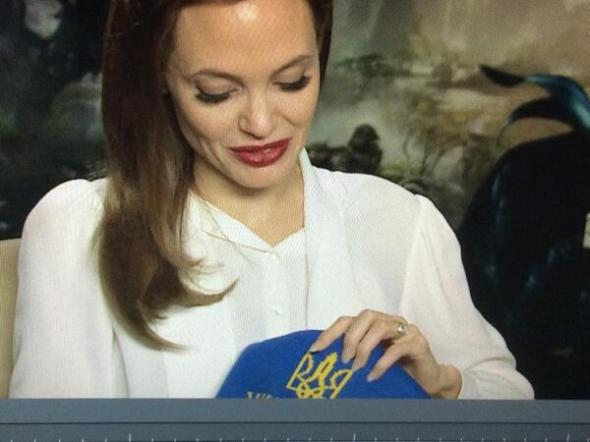 Even on the red carpet leading to the opening of her new film, Jolie did not tire to talk about Ukraine. “I would hope it never gets to that point. I hope I do not have to shoot a film about Ukraine, like “In the Land of Blood and Honey” which I shot about Bosnia. Ukraine I sincerely wish that your story is less bloody, more happy, and that eventually you finally arrive at a system of order.”

Angelina Jolie is a Special Envoy of the United Nations High Commissioner for Refugees.