INFORMATION RESISTANCE: The Trials and Tribulations of a Separatist Fighter 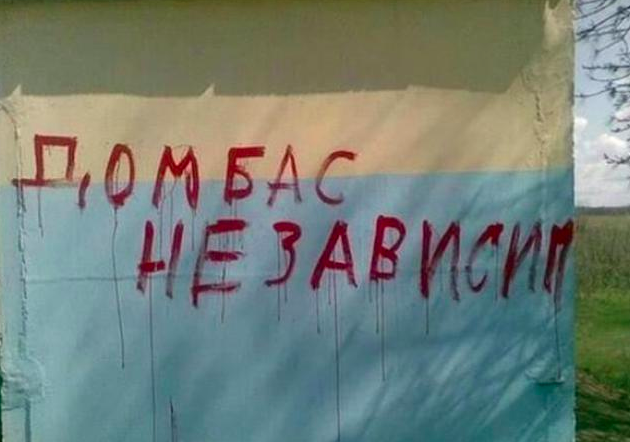 Graffiti: “Dombas is independent” Donbas is misspelled here, presumably by foreign insurgents who don’t know how to spell  local city names properly. It reads like: “Dumbass” this way.

By Information Resistance
05.20.2014
Translated and edited by Voices of Ukraine

Celebrated by Russian humorists, the toughness of Chelyabinsk muzhiks [colloquial for ‘men’] simply pales in comparison with the frankly harsh reality that is the life of the defenders of “Dombas.”

These fearless knights of “wall-to-wall” crusades with iron bars stuck up their sleeves back in the long-gone 90’s, are now forced to leave their usual habitats near pubs and take up important posts protecting public order from themselves as subjects of self-proclaimed republics. However, their valiant service at block-posts, in anticipation of raids by “Banderites” and “Right Sector scum,” has had no effect on their clouded minds, corroded by Russian propaganda, synthetic dope, and surrogate alcohol. Especially since all three of these ingredients are supplied to the block-posts in abundance.

…Shkrek, king of local dives and diners, was behind the wheel of his dad’s old car, not too bothered by the slight tremor in his hands. The new “people’s” government is nothing like the “Kyiv junta.” After getting the sack at the local police for being overly enthusiastic in his one-man effort to make alcohol extinct, Shkrek became a respected man again when he received a gun and a position in the local “self-defense” from the hands of the “people’s governor.”

Less than a kilometer left to the place of duty–a block-post on a highway in the direction of the capital. Up ahead, a big board displayed a heartwarming call, “Everyone to the Referendum.” Driving by, the new “dombas” big shot, saw–for the first time ever–the smaller text underneath, saying, “to join the Dnipropetrovsk Oblast.”

A Right Sector provocation! Kolomoysky [governor of the Dnipropetrovsk Oblast] goes on the offensive!“–Shkrek’s brain declared. Emergency braking–and two Molotov cocktails are flung at the big board. Just to be sure.

The unusual commotion in a relatively quiet place caught the attention of a heavily boozing barbeque party, in a glade barely a hundred meters away from the big board. A sacred shrine on fire? Clearly the work of Right Sector scum! And it looks like the boldest of them is standing right under the big board! The first blow landed on Shkrek’s jaw a mere minute after his Molotov cocktail attack. Leaving the obvious Right Sector scum provocateur prone on the asphalt, the real “Dombas” patriots went to trash his car.

The weird racket by the commander’s car did not go unnoticed at the block-post–thanks to Nyasha, the ever-vigilant junkie watchdog. Every man able to move his feet abandoned the western frontier of “Dombas” and followed the ex-boxer Nyasha, who rushed towards the big board shouting, “Right Sector scum in town!”

In this glorious combat between the “self-defense” and the kebab-lovers, lives could have been lost. Chances are, the only survivors would be those who remembered the tactics of the bad old 90’s and the wall-to-wall fights of those days. Both the defenders and simple “Dombas” patriots have Shkrek to thank for their continued survival. Forcing open his swollen eye with difficulty, the former cop and now, a man of influence, recognized familiar faces on both sides, and heard the tell-tale battle cry of “Death to Right Sector scum!”

A couple of missing front teeth did not impair the local “self-defense” leader’s authoritative baritone. The barely legible “stop this f…ing now!” distracted the creators of the bright future of “Dombas” from their scuffle. Shkrek was lifted to his feet and dusted off, they listened to the story of his fight against the Right Sector scum. Soulful words about “f…ing mix-up” kept echoing around the barbeque for a while. Nyasha made two vodka runs back to the block post, while also making sure that “Dombas” is under lock and key, and no Right Sector scum will pass.

The following day, the only working plant in the city was stopped, with six shots fired from a grenade launcher. The reason being, it was owned by [Ihor] Kolomoyskyi, the biggest “Right Sector scum” there is. This puts a whole new spin on “our thanks to the people of Donbas…” [reference to a football chant popular in 2011-2012: “our thanks to the people of Donbas for our faggot of a President.”]

Based on a real story told by emissaries of the Information Resistance group.

2 Responses to INFORMATION RESISTANCE: The Trials and Tribulations of a Separatist Fighter