03.13.2014 Postcardsfrommaidan.org
Translated and edited by Voices of Ukraine

Postcards from Maidan is an art initiative that helps facilitate the psychological rehabilitation and physical recovery of patients. Artists visit the wounded and use drawings as a storytelling mechanism of Maidan. The wounded are later presented with the drawings. This is the story of one Maidan protester. This is story #13. 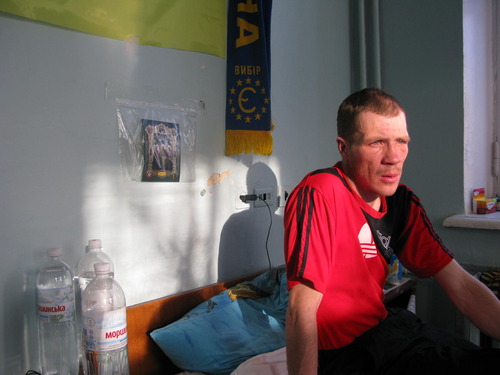 “I’ve been on Maidan since December 9, I came from the Rivne Oblast [region], Dubny District after the students got beaten up. I left my job and came to Maidan. I’m from the [Little] Bears. Have you heard about the ‘Bears?’ This is the First Company [Sotnya], first defense company. The [injuries] that you see on me—these are little flowers. I don’t consider myself a hero; we had tons of these heroes. If I were alone, I would really not have done anything. There were four of us, friends, we worked at Druzhba Narodiv [area by a subway station in Kyiv]. One has left us, and the three of us came together to Maidan after the students’ beating. Two of them, 19 and 20 years of age, died. And you tell me, how can I, after all this, come back to my village, when I find myself at 32 years [of age] still alive and both of them were sent home in coffins? For me to leave Maidan halfway there and come back home—it won’t happen. I will stay here for as long as it takes them to realize that Ukraine is free and there will be no such lawlessness as before! I am saying it personally now. This is my point of view. I have joined the Right Sector now. I don’t stand here for the money, and never did, I have a daughter, and I don’t want her to be enslaved by such a motherfucker like Yanukovych in the future.

When I was wounded, I remember only that I wore a hardhat. It all started on February 18. We lived on the 7th floor of the Trade Unions House, our ‘Bears’ lived there. When they came in from the roof and started setting the Trade Unions [building] on fire, we moved to the 2nd floor where the medications were stored—we jumped out of the windows and threw the women out because they were suffocating—we threw them to the inner side [facing back of building and kitchen exit, rather than the more open Khreschatyk Street side], where the grains and the bread were located [it was below freezing so they would not spoil]—to try and save at least someone. Very many of the people burned; I saw it with my own eyes.

On February 19, we walked between Instytutska and Hrushevskyi Street­—vehicles were already standing there full of motherfuckers, by the Mariyinskyi Park. We came over to exterminate them. What I do remember—when my friend fell down, I dropped my shield and held him by his right arm and felt a hit from the right side. And that’s it. I don’t remember anything else. I remember a big fight, a lot of police. I remember how they lifted me up, and then remember how I lay in a clinic. It turns out I spent three days lying in unit 6-a of surgery. My memory started to come back. All that I can say is how I got here. At the moment, my diagnosis is that [my] 6th, 7th, and 8th ribs are broken, 11th and 12th ribs are smashed from the spine. Head trauma, I can’t see in my left eye. I won’t even get started about bruises on my arms and legs. I was treated at the Trades Union [House], and then at Mykhaylivskyi [Cathedral], and then they moved me here since I couldn’t see in one eye. I’m here since February 24.

On February 18, we came to Mariyinskyi Park with a peaceful rally, a ‘Peaceful Walk’ together in a Ford vehicle from the ‘Batkyvshchyna’ [Fatherland party]. We came around 10 a.m. and stood in the corner. There, the “titushky” [hired thugs]  stood behind policemen’s backs and threw paving [stones]. We defended ourselves, and went on the counterattack. Around 3 or 4 p.m., after lunch, they started throwing grenades and chasing us. I remember well how on the night of February 18 and 19, we came to Arsenalna [subway station] from the Cathedral and took out the headless corpses—our police had done this. I couldn’t understand anything. As far as I know from some information, they should look for heads in the Dnieper [River]. And you know what’s the most insulting about this? When we came to the same basement the next day, where everything was in blood—everything was painted white there. We chip off the paint—there’s blood underneath. 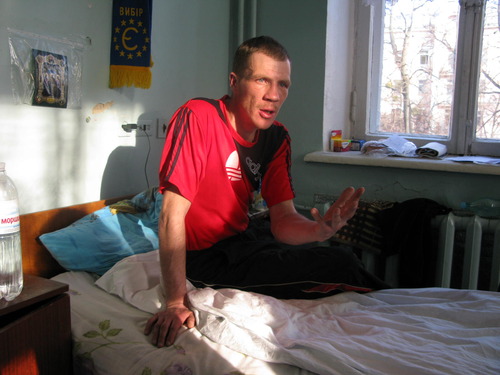 Maidan is a grave. A grave where people were killed. And I will protest daily, both now, and in the future—there will be no more holidays on Maidan. I will do everything in my power to make sure there is no holiday there. Because it’s a grave of Brotherhood, where they burned our boys alive.

I don’t know what will happen, how it will progress. They brought us the 98 octane gas. We said they shouldn’t have, go buy the 68 octane, and they said, ‘No, it will burn brighter.’ Old women made [Molotov] cocktails because they wanted to help somehow. They assembled them and transferred them to the frontlines. They passed the paving stones in a chain—all this helps. People are caring in Ukraine. Cigarettes, tea. They fed our guys. People watch the happenings in Kyiv. Women cried standing by the barrells and wept, ‘Boys, how can we help you?’ I won’t say that Kyiv did that, all of Ukraine did. Everyone does what they can.

Maybe Yanukovych is right: we have few casualties now, but there could be so many more. If he resigned then—he could have been a hero. Everyone would respect him. And now he’s a partisan that is hiding in Putin’s bushes.”

Artist Yevhenia Belorusets talked to Ivan in Oleksandrivska Hospital. A section of a book about Maidan which Yevhenia is working on, will be devoted to the protester.

2 Responses to PROJECT POSTCARDS FROM MAIDAN: Ivan Ilchenko from Rivne