As feared, Russian OMON spetsnaz forces, together with the so-called Crimean “police,” are preventing Mustafa Jemiliev from entering Crimea and seem determined to cause confrontation with the Crimean Tatars.  Around 5 thousand Crimean Tatars have arrived at Armyansk on the border between Kherson oblast and Crimea.

Thousands came early on Saturday morning to meet Mustafa Jemiliev. Many had tears in their eyes as they greeted the veteran leader of the Crimean Tatars a day after he was stopped by the Russian authorities in Moscow from travelling to Simferopol in Crimea.  He was informed that this was in accordance with a five year ban on his entry to the Russian Federation.  With Crimea having been annexed by Russia, this ban now includes Mustafa Jemiliev’s homeland,  Jemiliev called the ban on his entry to Crimea “the zone of Russian democracy.”

Several thousand Crimean Tatars came right up to the checkpoint, and then formed a live chain or corridor to enable Jemiliev to cross into Crimea. The Crimea News Agency reports that the acting interior minister, Sergei Abisov arrived at the border and told those present that Mustafa Jemiliev would not be allowed to enter. In speaking with the head of the Mejlis, Refat Chubarov, Abisov claimed that there had been information in the press about the ban on Jemiliev entering the Russian Federation for 5 years and that Jemiliev himself had received this document. The dishonesty is astounding.  The ban was reported on April 22, yet by the following day high-ranking people in both Russia and Crimea were claiming that the document presented to Mustafa Jemiliev had been a fake. The ban, as we see, is no fake.  It is, however a monstrous affront to Mustafa Jemiliev and the entire Crimean Tatar people, and a violation of Jemiliev’s rights. 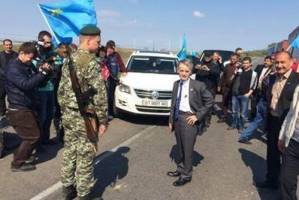 Hromadskie.tv quote Leila Muslimova, Mejlis press secretary as reporting that as of around midday Kyiv time Mustafa Jemiliev, accompanied by the head of the Mejlis, Refat Chubarov and around 5 thousand Crimean Tatars, were standing, confronted by around 50 OMON officers.  Media reports say that shots were fired in the air in an unsuccessful attempt to disperse those gathered.

This text will be updated shortly, In the meantime, please see the following for details about the ban imposed on Mustafa Jemiliev, and a translation of most of the Mejlis’ decision, adopted in response: Russian ban on Mustafa Jemiliev enforced (updated).

Crimean Tatars leader and People’s Deputy of Ukraine Mustafa Jemiliev is returning to Kyiv. On Saturday he did not manage to pass the checkpoint “Turetskiy Val” in Armiansk to enter into the Crimean peninsula. It would appear the Russian ban on his entry into “RF territory” is being put into effect in Crimea.

Jemiliev also said he would not leave Armiansk [northern Crimea, located on the Isthmus of Perekop] up until the last Crimean Tatar crossed the border into Crimea.

During the rally, Jemiliev also said that he would come to his home in Crimea for two days. After 2 days, he will travel to Vienna, where he will attend the meeting of the Committee of Ministers of the Council of Europe, which will consider the situation in Ukraine, and in particular, the situation of the Crimean Tatar people in Crimea.