03.27.2014 Postcardsfrommaidan.org
Translated and edited by Voices of Ukraine

Postcards from Maidan is an art initiative that helps facilitate the psychological rehabilitation and physical recovery of patients. Artists visit the wounded and use drawings as a storytelling mechanism of Maidan. The wounded are later presented with the drawings. This is the story of one Maidan protester. It is story #20.

“I am from Moscow, was born in Russia, North Ossetia. Near the little house where [Alexander] Pushkin was born. I would like to tell you that all my life is interconnected with the name of my favorite poet–Pushkin. Wherever I lived, I lived either on a Pushkin Square or a Pushkin Street. I lived in Tajikistan for 45 years, at the very border with Afghanistan. I worked as a teacher, I taught Russian – taught children to read, write and speak in Russian. After the collapse of the Soviet Union, a civil war started in Tajikistan, it was very cruel. I suffered horribly through this war – my relatives and friends were killed, many people left. Many came to Crimea. Today, my soul hurts for them–they survived a horrific war in Tajikistan and now they have tears in their eyes again. Panic, fear, and horror again. I ran from Tajikistan twice, I took my children and the children of others, hoping that Moscow will award us refugee status and I would be able to obtain some minimal living quarters and raise my children [there]. Unfortunately, Moscow did not give me refugee status, because I didn’t have my passport on hand–they took our passports. We were sent back, to Tajikistan. Just talking about it hurts me a lot. It happened in 1994-1997. We viewed Moscow as a cultural center, we went there to obtain new knowledge, visit museums. And when we came there, we were simply kicked out–we were shocked.

My civil husband is a Ukrainian. He owns a piece of property–an apartment–in downtown Kyiv. When his Mom died, he was beaten and was not given the opportunity to take back his own apartment. After my husband’s death, he was very sick, I sued [those people], and the court case lasted a very long time. 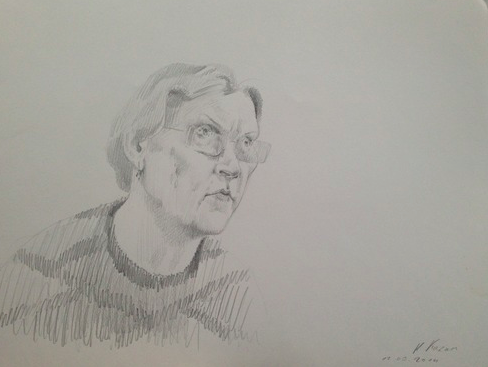 I was outraged by such lawless actions. I came to Maidan [Independence Square] every day. I am a historian by profession. I was interested in the following: why did people come to Maidan and what do they want. And when I visited the tents and talked to people, I asked them what they wanted. At first, they responded, “Why would you care?” And then I said, “I am from Moscow, and I’d like to know what is happening.” And every one of them told me about their misfortunes that had brought them to Maidan. It’s mainly this: to fight corruption and protect their rights, the rights of their children and the elderly. And today, I am convinced yet again in what a terrible state the Ukrainian people have found themselves. Where there are no medications in the hospitals, and people bring their own. When I came to Maidan, imagine this, I saw the events in Tajikistan and how people were sent out on airplanes. I have not seen happiness and laughter for a long time after this. Then I went to [North] Ossetia through Abkhazia. I wound up in a war in Abkhazia. My passports saved me. My passport said, “Ukrainian [by ethnicity].” Because that’s what my grandfather had in his passport, and I used my grandfather’s information in my passport. When I came to Maidan and saw the youth there, that people sing songs–I was so elated. And when suddenly they started beating those people because they wanted to voice their words–I was outraged to my whole core. And then, I started asking whom and how I could help. When I started approaching people in tents and talking to them, I felt how happy they were. So happy that I am from Moscow, that I am a Russian, that Russia supports us in our fight with Yanukovych’s gang. “Of course, they support [you], I said, but not everyone knows the truth you bring from Maidan.”

They stood up for normal, human life. We hugged, danced, they treated me with food, and I brought them cigarettes. I got to know many people on Maidan. I started coming to Maidan often. When I came there–it was like a breath of fresh air for me. Maidan–is the word of truth. For the first time in many years, I hear the truth out in the streets. I have never heard things like this in Moscow. I started attending, helping, and speaking from stage. There were always so many people [on Maidan]. I missed my visa expiration day on February 3, [as a Russian citizen] I must leave [Ukraine] every three months. I left the next day, of course, they took me off the train, and interrogated me, “Why have you violated [the visa terms], why are you going.” I said that I was leaving Kyiv and coming back to Kyiv. “How so?” they ask. “I have a sick aunt in Kyiv, and a court case,” I answered. They still took me off the train, despite my age (62 y.o.), despite the fact that I was ill. Of course, I forgot my medications on the train. They kept me in a cold hallway for six hours. Even though usually this process takes about an hour. They let me go, but I had already caught a cold. And I’ve been sick ever since.

I came back [to Ukraine], and was off to Maidan right away. Even though I was sick, I wanted to do as much s possible. I wanted to gather as many fellow countrymen as I could, and to show that we are friendly nations.

I was on Maidan on February 18, 2o14. It was the most terrible day. So many people, so many young people died…

Putin starts to move in his troops, not even 40 days [since their death] passed–this is not the Christian way. I am proud that I did not vote for Putin, when he seemed like the “most peaceful President” back then. Today, I am ashamed to say that I am from Russia. I saved children from Afghanistan, and by the way, Russia accepted only a very small number of children [from there]. 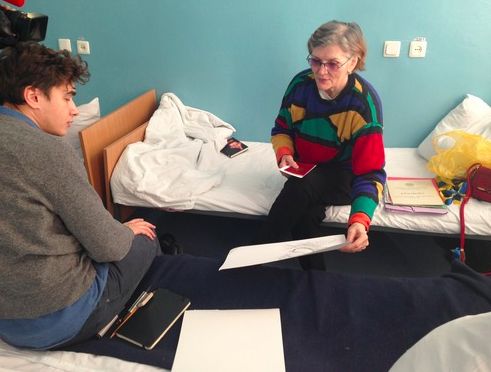 I always have my passport and my certificate with me. If I got killed on Maidan–they should know that a Russian citizen was killed.”

1 Response to PROJECT POSTCARDS FROM MAIDAN: Natalia Fomicheva from Moscow